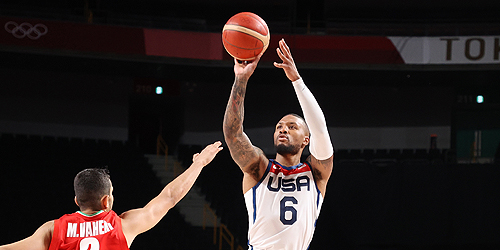 After falling in its Olympic Games opener Sunday, and in the process snapping a 25-game Olympic winning streak, the U.S. Olympic Men’s Basketball Team (1-1) came out strong to beat Iran (0-2) 120-66 Wednesday at Saitama Super Arena in Saitama, Japan.

Damian Lillard led six U.S. players scoring in double digits with 21 points, all of them coming on 3-pointers (7-13 3pt FGs).

“I think we came out with a lot more urgency,” Lillard said. “Our energy was higher, we played at a faster pace. We were more aggressive, and we played like ourselves. We didn’t come out here and think that it was just gonna happen, we made it happen, and that’s the way that we got to play if we want to be successful in these Olympics.”

The U.S. wraps up play in Group A against the Czech Republic on Saturday at 8 a.m. ET. The 12th-ranked Czechs (1-0), who edged Iran 84-78 in the country’s first Olympic appearance, play France (1-0) in their second game Wednesday. A win over the Czechs would send the U.S. to the quarterfinals in pursuit of a fourth straight gold medal.

“We were a bit too unselfish and that bit us before, but tonight I think guys came out there and were super aggressive to look for their shot but also keep everybody involved, and we were able to make some shots,” said Durant, who sat the entire fourth quarter. “Damian came out, got it scorching for us, so we’re gonna need that going forward.”

Wednesday’s victory was a marked contrast to the top-ranked Americans’ 83-76 loss Sunday to France in suffering just their sixth loss in 144 Olympic games and fourth in 57 games since NBA players became part of the equation for the 1992 Barcelona Games.

Part of that was the opponent. France is ranked seventh in the world and has a handful of current NBA players. Meanwhile 23rd-ranked Iran — in its third Olympics, and first since 2008 — is anchored by Haddadi, a 36-year-old center who became the first player from his country to play in the NBA but has been out of the league since 2013. To that point, some Iranian players pulled U.S. stars aside after the game to pose for photos.

It was not a wire-to-wire win, though.

With Booker and Jrue Holiday inserted into the U.S. starting lineup, Iran led 7-5 with 8:16 left in the first quarter.

That’s when Lillard and the U.S. found their shooting touch and took the lead for good with a 12-4 run that mushroomed into a 51-18 advantage, the biggest lead of the half. It was 60-30 at halftime as the U.S. shot 56.8 percent, including 50 percent from 3-point range. Against France, the Americans hit 36.2 percent and 31.3 percent from deep.

Meanwhile, Iran converted just 35.3 percent of its shots and 34.6 percent from long range.

The U.S. forced 23 turnovers and had a 38-5 advantage in fast-break points

“When we defend that way, we can get out in transition, get easier baskets, not playing against the set defenses often,” Lillard said. “I think we did that from the jump tonight, and it shows in the final score.”

The second half was more of the same as the U.S. led by as many as 57 points. Anchored by Lillard’s 7-of-13 performance from 3-point range, the U.S. made 19-of-39 tries from long distance.

The win also improved the U.S. to 100-7 since Jerry Colangelo was named managing director of the men’s program in 2005. Colangelo is retiring from the position after the Tokyo Olympics and will be replaced by 1996 Olympic gold medalist GrantHill.

You could make a case that Wednesday was the first time that the truly full U.S. roster was together, as the three players from the NBA Finals — Booker, Holiday and Middleton — were less than 24 hours removed from a lengthy flight when they suited up against France and hadn’t slept since arriving in Japan. The Americans also had to replace BradleyBeal (COVID-19) and Kevin Love (injury recovery) during their pre-Olympic training camp in Las Vegas.

“I think our communication as a group, you know, just being in a hotel together, being in the dining areas together, at practice shooting around just talking, I feel like after that loss we came together. It was a lot of communication between then and now where it was like alright it’s time start looking like Team USA,” Lillard said.

“Every situation is different,” he said. “We had some circumstances that not everybody’s dealing with, but nobody cares. So we’re jelling really well, getting to know each other and you know we’re starting to play together on the court.” Release: via USA Basketball