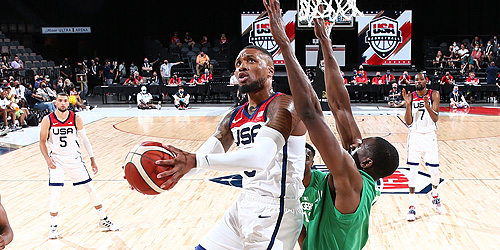 The USA Men’s National Team (0-1) stumbled in its first exhibition game as it prepares for the Tokyo Olympic Games, losing 90-87 to Nigeria on Saturday before a crowd of 4,313 spectators at Michelob ULTRA Arena at Mandalay Bay in Las Vegas. The difference between the and Nigeria on Saturday? While the statistics will bear out a few facts, it might come down to something very simple: The time the players on each team have been together. Saturday’s result, which was the unofficial beginning of the quest to win a fourth-straight gold medal when the Olympics begin in less than two weeks, came after the U.S. had just four practices and with only two players from the 2016 Rio Games. Nigeria, meanwhile, has been practicing for about a month. “I think with four days of practice, there were a lot of things I liked out there, but in a way, I’m kind of glad it happened,” said USA head coach Gregg Popovich. “That loss means nothing if we don’t learn from it. But it could be the most important thing in this tournament for us, to learn lessons from this and see what we did to move on, because it’s a great group of guys, high character, and we’ll figure it out.” Conversely, it was a watershed moment for Nigeria, which will be making its third-straight Olympic appearance. Nigeria played the U.S. in its debut at the 2012 London Games and lost 156-73. The loss marks just the second in 33 exhibition games since Jerry Colangelo took over as USA Men’s National Team director in 2005. Colangelo is retiring from his position following the Tokyo Games. Kevin Durant, already a two-time gold medalist who sported a 39-0 record in international competition with USA Basketball coming into the game, scored 17 points — including clutch 3-pointers down the stretch — to lead five Americans in double figures. Jayson Tatum — part of the starting five with Durant, Bradley Beal, Damian Lillard and Bam Adebayo — added 15 points and a team-best seven rebounds. Gabe Vincent, who plays internationally under his Nigerian surname Nnamdi, led the upstarts with 21 points and four assists. Vincent, who plays for the Miami Heat, was one of seven players on the Nigerian roster Saturday from the NBA and one of 12 in its 49-player camp. Golden State Warriors assistant Mike Brown coaches the 22nd FIBA-ranked Nigerians. Missing from Saturday’s game for the U.S. were three players who are still chasing a championship in the NBA Finals — Devin Booker of the Phoenix Suns and Khris Middleton and Jrue Holiday of the Milwaukee Bucks. To fill out the roster for the five exhibition games, seven players were added from the USA Select Team that scrimmaged with and against the Olympians during practice this week. Popovich pointed to two areas where the Nigerians were superior on this day: rebounding and 3-point shooting. Nigeria won the battle on the glass with a 46-34 overall advantage, including limiting the U.S. to just seven offensive rebounds. That complemented a stellar shooting effort from 3-point range. Nigeria was 20-of-42 from deep for the game and 11-of-19 in the second half. “Rebounding was a problem,” Popovich said. “The stats – I almost wanted to give it back to the stat guys and say, ‘Can you do these over? There’s got to be some mistakes. Do your homework over again.’ Because I thought we got murdered on the boards. We got beat on the boards, but I thought we got murdered.” There was never much separation between the two teams. The U.S. got a boost off the bench from Zach LaVine, Kevin Love and Jerami Grant to begin the second quarter and took a 36-29 lead, but it was just a 43-41 American lead at halftime. It remained tight into the fourth quarter when the crowd, sensing the urgency, gave a rousing cheer as Durant and Lillard re-entered the game with 7:37 left to play. Ike Iroegbu’s two free throws with 2:46 left in the fourth made it 80-74, the largest lead for Nigeria in the game. Then a 3-pointer by Michael Gbinije made it 85-77 with 1:43 left. Two Durant 3-pointers were countered by a Iroegbu trey, and Durant nailed two free throws with 43.6 left to pull the U.S. with 88-85. Despite the crowd chanting “De-fense!” throughout the last two minutes, there wasn’t enough offense to pull the Americans through. Durant drilled two free throws with 16.5 seconds left to pull the U.S. within 88-87, but Vincent sealed the deal with two free throws of his own with 13.2 seconds remaining. Tatum said while a lot of the Americans know each other, they are still learning how to play as a team. “I don’t know the exact answer,” Tatum said. “We’re making strides. None of us have ever played with each other, so we’re just trying to figure it out and we know we don’t have three, four weeks.” The U.S. faces Australia, ranked third in the world, in the second game of its pre-Olympic schedule at 8 p.m. EDT on Monday, July 12. The game will be televised by NBCSN. (Release via USA Basketball) Follow Adam Zagoria on Twitter Follow ZAGSBLOGHoops on Instagram And Like ZAGS on Facebook