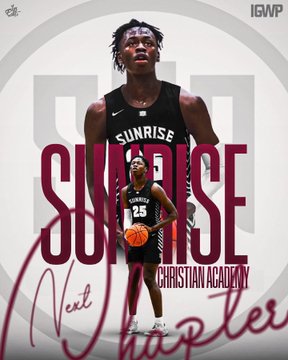 By JACOB POLACHECK Mark Mitchell, the nation’s No. 10 ranked prospect in the class of 2022, told ZAGSBLOG Tuesday evening that he is looking to cut his list this summer and is targeting a commitment by the end of the year. “I’m thinking about December after I get to see them play a little bit,” Mitchell said. “I don’t want to prolong it too long. It’ll be in December or early January.” Mitchell, the 6-foot-8, 205-pound small forward out of Wichita, Kansas, says he’s looking for a school that can develop him as a person and a player. “I want to win a national championship,” he said. “I’ve been to the Final Four and experienced it, so it’s something surreal that I hope I can play in one day, so wherever I can win right away.” This month, Mitchell has taken official visits to UCLA, Missouri, Kansas and Duke, with each school laying out their plans for new name, image and likeness legislation set to be put into effect on July 1. “It was cool, just to see all these different places,” Mitchell said. “I got to talk to the coaching staffs in-person, since I haven’t been able to do that since COVID. It was cool to see everything in-person for the first time.” Mitchell started his official visits tour with a trip to UCLA from June 6-7. “The campus is beautiful, for sure. The weather is great,” he said. “I really love the coaching staff. They’re down to earth, genuine people. And just the players. “They love the coaching staff, for sure. They love (Mick) Cronin. They all have dire respect and love him at the end of the day. That was something that really stood out to me.” Mitchell also broke down UCLA’s pitch: “They have a special group,” he said. “The year that I would be there would be with Amari Bailey and Dylan Andrews. They might still also have guys like Tyger (Campbell), so just to bring it all together. They definitely have a special group coming in.” Mitchell’s next trip was to Missouri on June 12 for his second official visit. “The coaching staff almost felt like family,” Mitchell said. “Coach (Cuonzo) Martin and coach (Marco) Harris-(Stevens), they were really down to earth. My parents loved it. It was a really down to earth, genuine visit. I love Columbia. “I could start something new there. They’re trying to change the culture there and build a good program. I could be a big piece of that, a big part of that.” Mitchell also enjoyed being on campus while school was still in session. “It was a whole different visit because there were actually people on campus, so you could see what it would be like during the school year,” he said. “Compared to the other visits where it was more empty, kind of like a ghost town. It was definitely a very fun visit.” For his third trip, Mitchell made his way to the University of Kansas, taking his official visit on June 16. “It’s close to home,” Mitchell said. “I got to watch players work out and talk to coach [Bill] Self.” This summer, Mitchell announced that he will be transferring from Bishop Miege (KS) High School to Sunrise (KS) Christian Academy for his senior year, set to play alongside class of 2022 Kansas commit Gradey Dick. “They want me to come there with Gradey,” Mitchell said. “Me and Gradey are pretty close so we know each other’s games. We could do something special with that class and hopefully we’ll win a national championship.” For his fourth official visit, Mitchell made the trip to Durham to visit Duke from June 28-29. “Just the history,” Mitchell said. “Obviously, coach [Jon] Scheyer is a great guy, really down to earth. I talked to coach [Chris] Carrawell.” Mitchell also had the chance to talk to Duke head coach Mike Krzyzewski, who is set to retire at the end of the 2021-22 season, calling it a ‘surreal’ experience. “Seeing Coach K right in front of you, in-person, that was just crazy,” he said. “It’s a little different at Duke. I can say that. They definitely move different up there. I don’t even know how to describe it. It’s a different level, though. “As a wing. That [Jayson] Tatum, Brandon Ingram, R.J. Barrett-type that comes in as a freshman and makes an impact early. They’re trying to build a great group for our class. They think I could be that type of guy for them.” After having surgery on his right elbow in April, Mitchell remains out for the July evaluation period, but he says his recovery is coming along great and plans to return to basketball activities in two weeks. “I’m way past schedule of where I’m supposed to be,” he said. “I’m just taking it slow though. I’m not going to play in July. I’m just taking it day-by-day. I’ve got a little over a month left of rehab so that’s when I can really start playing again for real.” Once he returns to the court, Mitchell is looking to help Sunrise avenge its loss to Montverde in the 2021 GEICO Nationals Championship Game. “Hopefully we can win a national championship. I’m just trying to get better, man,” he said. “I’m going somewhere where I’m going to be pushed everyday, challenged. It’s something I’m looking forward to, just getting down there with those guys. Being able to get in the gym whenever I want, I’m really looking forward to that.” Follow Jacob Polacheck on Twitter Follow Adam Zagoria on Twitter Follow ZAGSBLOGHoops on Instagram And Like ZAGS on Facebook