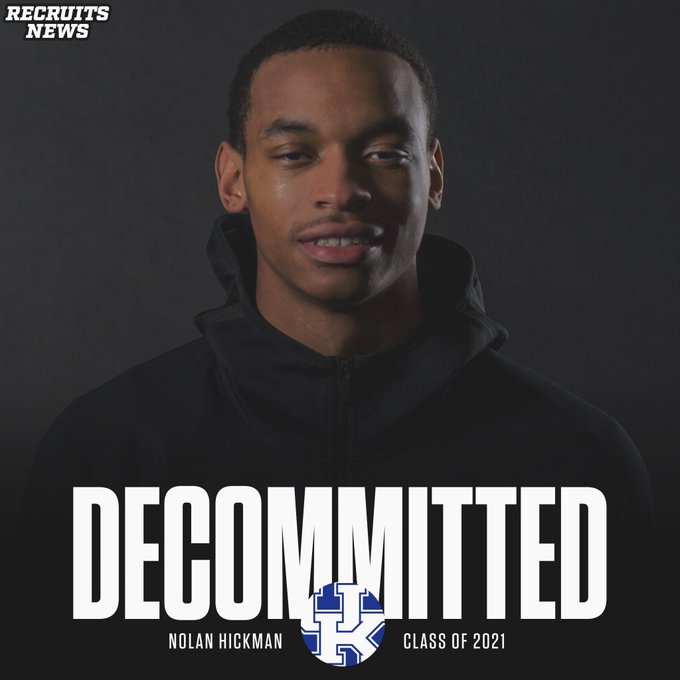 By JACOB POLACHECK Class of 2021 guard Nolan Hickman has de-committed from Kentucky, Recruit News reported Friday. “I got nothing but all love for BBN..Coach [John Calipari].. and the entire Kentucky coaching staff,” Hickman said in an Instagram Story Friday. Hickman, a 6-foot-2, 185-pound point guard out of Wasatch (UT) Academy, committed to Kentucky in August over offers from Kansas, UCLA, Oklahoma, Arizona, Cal Poly, Montana and Oregon State, among others. Hickman was recruited to Kentucky by Tony Barbee, who recently left the program to take the head coaching position at Central Michigan. Joel Justus also left the staff for Arizona State. “The connection with Tony Barbee, the rapport he developed with the coaching staff, that definitely had something to do with it,” Hickman’s father, Nolan Hickman Sr., told KSR on Friday. “We love the entire staff, with Calipari as well, but with Tony being his lead recruiter and not being there, and then Joel (Justus) being his second recruiter, it just made things rough.” He added: “Honestly, we don’t even have a plan, but I assume (he’ll want to stay home). If I had to say anything, he would probably be staying close to home. I don’t know if it’ll be at home or how far he’ll go, but it’ll probably have to be a straight flight wherever he is for us to reach him, for sure.” Kentucky currently has a two-man 2021 recruiting class consisting of five-star forward Daimion Collins and four-star forward Bryce Hopkins. The Wildcats are also bringing in West Virginia transfer forward Oscar Tshiebwe and Davidson transfer guard Kellan Grady. Follow Jacob Polacheck on Twitter Follow Adam Zagoria on Twitter Follow ZAGSBLOGHoops on Instagram And Like ZAGS on Facebook