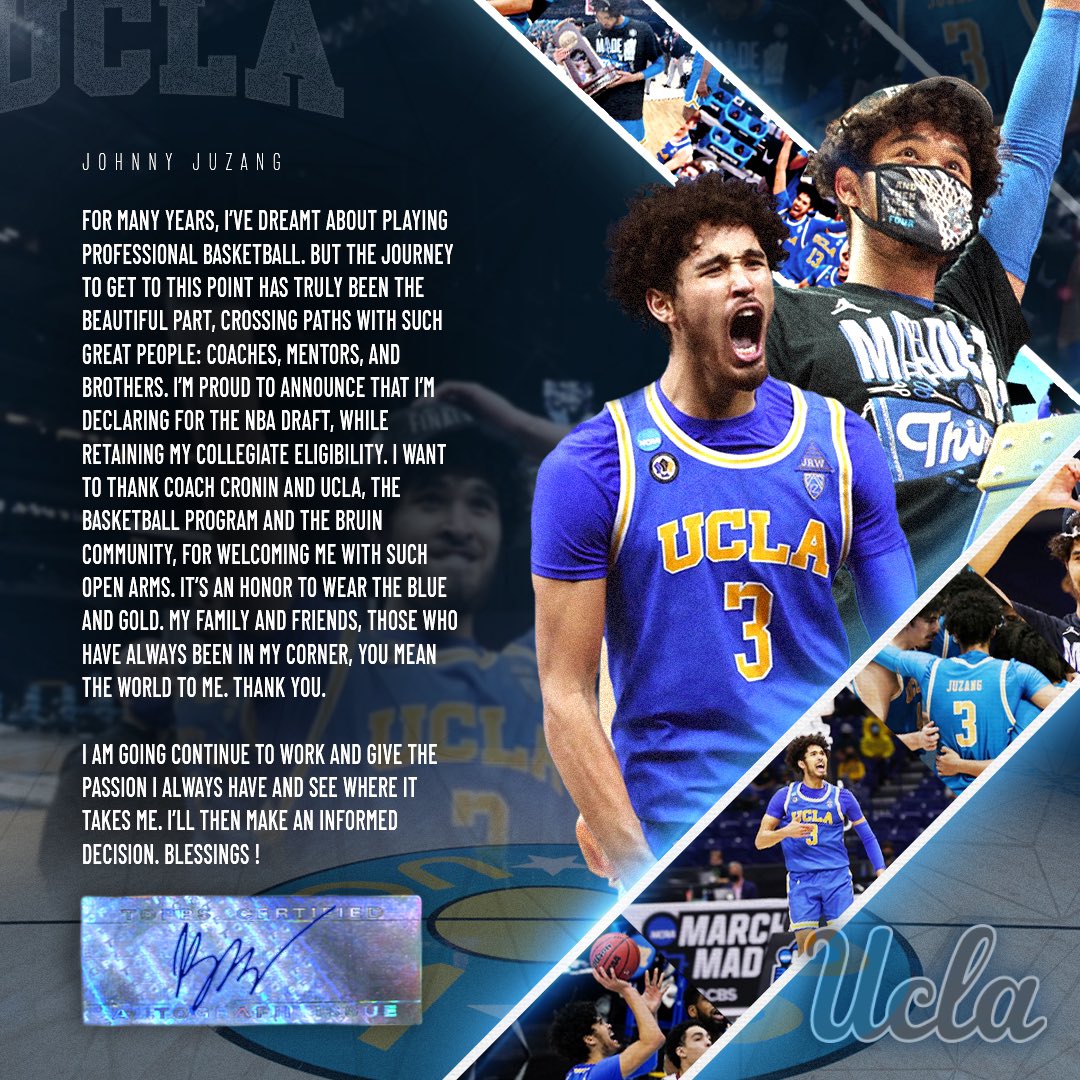 UCLA sophomore guard Johnny Juzang announced on Tuesday that he is declaring for the 2021 NBA Draft, but will retain his college eligibility. He is ranked the No. 63 “Best Available” prospect, per ESPN.com, and one NBA executive called him a “second-round pick Juzang, a 6-foot-6 guard from Tarzana, Calif., finished the 2020-21 season as UCLA’s leading scorer. He averaged 16.0 points and 4.1 rebounds per game, playing in 27 contests and making 26 starts. Juzang averaged 22.8 points and 4.0 rebounds in six NCAA Tournament games, helping the Bruins (22-10) advance to the NCAA Final Four for the first time since 2008 (and for the 19th time in program history). “For many years, I’ve dreamt about playing professional basketball,” Juzang wrote in a statement posted to Twitter (@JohnnyJuzang) and Instagram. “But the journey to get to this point has truly been the beautiful part, crossing paths with such great people: coaches, mentors, and brothers. I’m proud to announce that I’m declaring for the NBA Draft, while retaining my collegiate eligibility. I want to thank Coach Cronin and UCLA, the basketball program and the Bruin community, for welcoming me with such open arms. It’s an honor to wear the blue and gold. My family and friends, those who have always been in my corner, you mean the world to me. Thank you. I am going continue to work and give the passion I always have and see where it takes me. I’ll then make an informed decision. Blessings!” Juzang, who excelled at Harvard-Westlake School (Los Angeles) before spending the 2019-20 school year at the University of Kentucky, finished the 2020-21 season ranking No. 3 in the Pac-12 in free throw percentage (87.7%) and No. 9 in scoring (16.0 ppg). He scored in double figures in 20 of 27 games played and tallied at least 20 points in eight games. “We all support Johnny and, for that matter, all of our players in the future who are making these types of decisions,” said head coach Mick Cronin. “I will work closely with Johnny and his family on fact-finding and anything else we can do to support them in this process. I ask our fans to be understanding, as these young men all love UCLA but also deserve the right to explore their professional status. Johnny is a great young man and hopefully we can all stand with him in this process together.” Juzang’s 137 points scored in six NCAA Tournament games were the second-most points scored in one NCAA Tournament by any UCLA player. Gail Goodrich totaled 140 points through four games in the 1965 NCAA Tournament, when the Bruins defeated Michigan in the NCAA Championship contest (Goodrich averaged 35.0 points per game in that tournament). Other top point totals in one NCAA Tournament at UCLA came from Kiki Vandeweghe in 1980 (scored 119 points in six games) and Ed O’Bannon in 1995 (scored 115 points in six contests). Follow Adam Zagoria on Twitter Follow ZAGSBLOGHoops on Instagram And Like ZAGS on Facebook