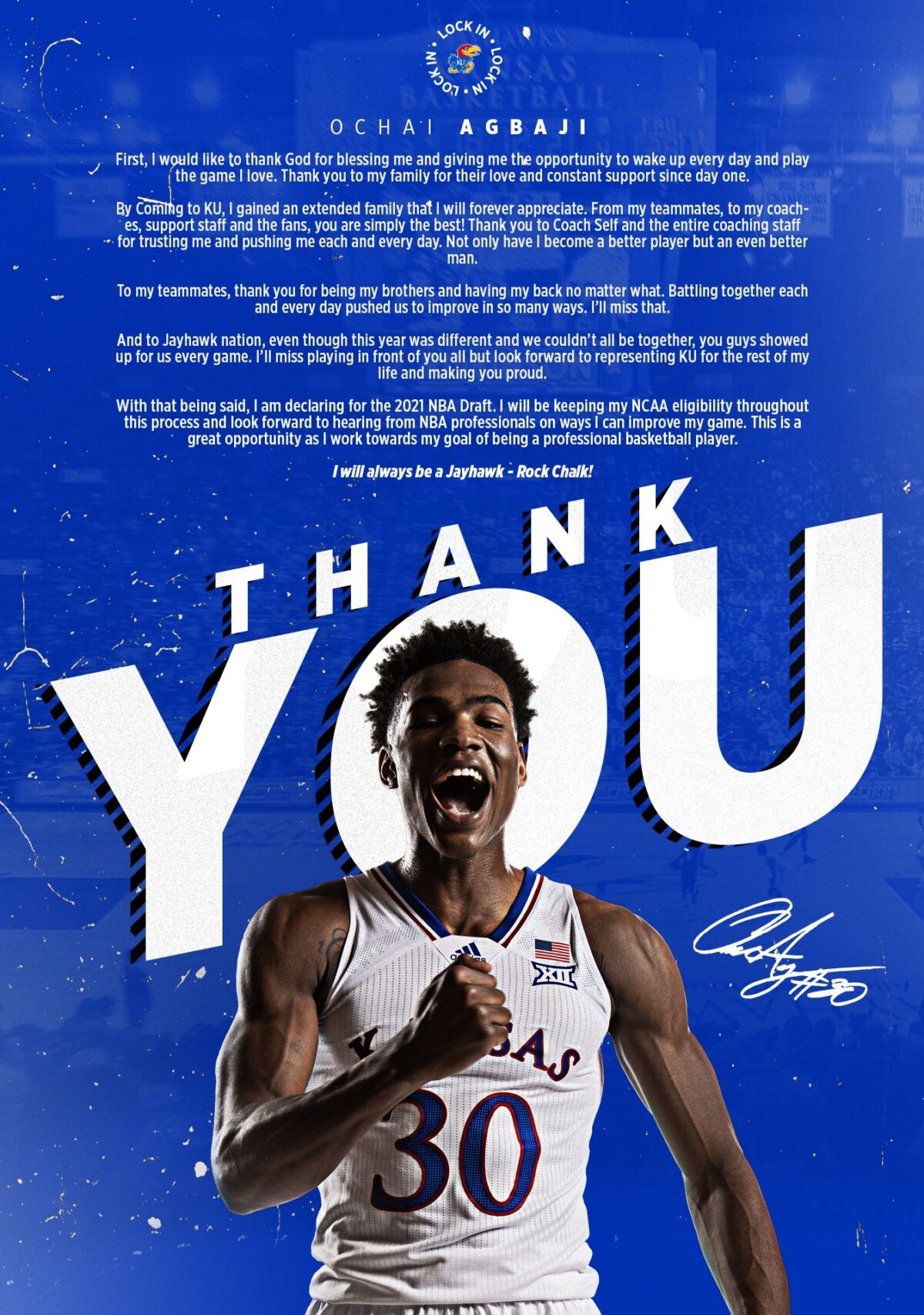 Kansas basketball’s Ochai Agbaji announced Thursday that he has declared for the 2021 NBA Draft. The 6-foot-5 junior shooting guard is rated the No. 66 Best Available player, according to ESPN.com. Agbaji, a native of Kansas City, Missouri, will retain NCAA eligibility while testing the draft waters. Per NCAA rules, student-athletes can participate in the NBA draft process if withdrawn by Monday, July 19. “First, I would like to thank God for blessing me and giving me the opportunity to wake up every day and play the game I love. Thank you to my family for their love and constant support since day one,” Agbaji said in a statement on Thursday. “By coming to KU, I gained an extended family that I will forever appreciate. From my teammates, to my coaches, support staff and the fans, you are simply the best! Thank you to Coach Self and the entire coaching staff for trusting me and pushing me each and every day. Not only have I become a better player but an even better man.” “I will be keeping my NCAA eligibility throughout this process and look forward to hearing from NBA professionals on ways I can improve my game. This is a great opportunity as I work towards my goal of being a professional basketball player,” Agbaji added. As a junior, Agbaji was an All-Big 12 Honorable Mention selection for the second-straight season, averaging 14.2 points paired with 3.5 rebounds per game. Agabji ranked fourth in the Big 12 in 3-point field goal percentage (38.3%), while leading the conference in 3-point field goals made per game (2.6). “Ochai and I talked a lot about his basketball future over the past couple of weeks so he could determine what was best for he and his family moving forward,” said head coach Bill Self. “After thinking that through, he made the decision to enter the NBA Draft. He clearly has a skill set that translates well to the professional game, and the NBA draft process will be a great opportunity for him to be evaluated. He will sign with an agent, but will continue follow the guidelines set by the NCAA and NBA to protect his collegiate eligibility. Och will be able to gain great insight on what areas he needs to work on which could improve his draft stock. I know that will be beneficial for him this year before he decides whether he should come back or remain in the NBA Draft process.” KANSAS ADDS DRAKE TRANSFER YESUFU Kansas this week also added Drake transfer Joseph Yesufu, a 6-foot sophomore point guard who averaged 12.8 points per game, 1.8 assists and 1.8 rebounds per game in 31 games after appearing in just 13 games as a freshman in 2019-20. He will have three years of eligibility left. Kansas remains in the mix for prep guard Ty Ty Washington and Creighton transfer Christian Bishop. Follow Adam Zagoria on Twitter Follow ZAGSBLOGHoops on Instagram And Like ZAGS on Facebook