Jordan Goldwire, Duke's only 4-year senior, says it would mean 'everything' to play in one more NCAA Tournament | Zagsblog
Follow @adamzagoria 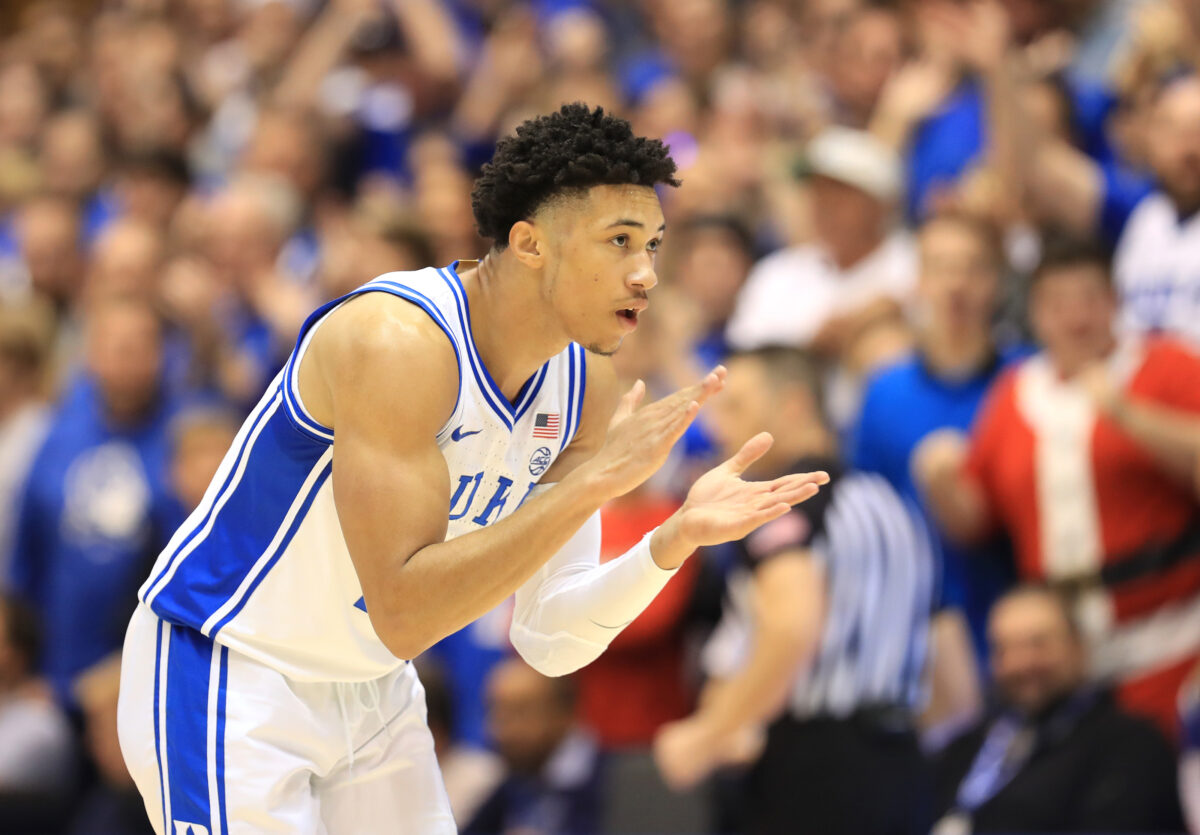 By ADAM ZAGORIA Jordan Goldwire has already played in the NCAA Tournament twice during his four years at Duke. And he would have played in a third Big Dance last season had the tournament not been canceled by the pandemic. Now with his senior season coming to a close, and Duke firmly entrenched on the bubble, Goldwire wants to help the Blue Devils make a push for one last March Madness run. “To play in the [NCAA] Tournament, it would mean everything,” Goldwire, a Norcross, Ga. native, said Thursday on a Zoom call in response to my question. “That’s what you grow up watching, I’ve obviously had a little taste of it going to the Elite Eight twice and then last year it getting cut short. But being able to play in it, that means a lot. “If we don’t get to play in it, it’s devastating, terrible. Terrible feeling if we don’t make it.” Entering Saturday’s home finale against Louisville at Cameron Indoor Stadium, Duke (11-8, 9-6 ACC) has won four straight, including back-to-back wins over No. 7 Virginia and a blowout of Syracuse. The Blue Devils are on the bubble, with ESPN’s Joe Lunardi listing them among the “Next Four Out” as of Friday morning. They will need to close strong in their final three games — Louisville, at Georgia Tech and at North Carolina — and then probably make a run in the ACC Tournament to make the 68-team field. “I definitely think we have a team that’s capable of winning a bunch of games,” Goldwire said. “We lost a lot of close games, too, so I think definitely if we’re able to get in the tournament we can make some noise.” The NCAA announced Thursday that there will be four “Replacement Teams” from among the “First Four Out” who will be poised to sub in for teams that have last-minute Covid-19 issues. With Duke currently on the bubble, it would be somewhat ironic if a team with five NCAA championships under Coach Mike Krzyzewski ended up as a “Replacement Team.” “I’m sure that if you’re the team that’s trying to get into the tournament, you’re excited if a team does maybe get knocked out,” Goldwire said. “It’s something that I haven’t even looked at or paid any attention to, honestly. I’m just trying to worry about what’s going on here and just get into the tournament.” Goldwire, who was headed to Eastern Kentucky before committing to Duke in May 2017, has been a key player for Coach K this season. He’s averaging 6.3 points, 3.8 assists and 3.1 rebounds while leading the ACC in assist-to-turnover ratio (2.8). He said he learned about running a team from former Duke and current Spurs guard Tre Jones. “For me personally, I’ve never been a guy who has turned the ball over a bunch, so I think it’s something that comes naturally, honestly,” he said. “I’m just trying to make smart plays and not trying to overdo things. Overall as a team, like you said, we’ve been turning the ball over less. I think that comes from everybody trying to be more cautious and make the best decisions for the team.” Goldwire’s defense has also been critical for Duke. He has recorded 2+ steals in 18 of 19 games this season. His 2.53 steals per game ranks tied for 12th nationally. Against Virginia, one of his thefts led to a transition layup by Jaemyn Brakefield. Goldwire has also provided much-needed leadership to freshmen guards D.J. Steward and Jeremy Roach. “Jordan has really helped them in the last few weeks,” Coach K said recently. “They are out there and learning from their experiences.” Meantime, Duke has gelled in the wake of freshman Jalen Johnson’s decision to opt-out on Feb. 15, news first reported by ZAGSBLOG. Goldwire did not want to get into the issue of whether Duke is better off without Johnson, a projected lottery pick, but did say the team is different with freshman Mark Williams now the full-time starting center. “With Mark taking over full-time in the middle, guys coming off the bench know that they’re probably going to get minutes, Jaemyn, Henry [Coleman] and maybe Patrick [Tapé] so he gives us a presence inside and that’s something we needed so he’s playing great,” he said. Heading into the Louisville game and another matchup with star guard Carlik Jones, Goldwire is aware this will likely be his final game at Cameron — unless he were to decide to come back next season and take advantage of the NCAA rule granting an extra year of eligibility to winter athletes. “Definitely,” he said. “It’s been a crazy year, but this is our last home game against Louisville and I am a senior, so it definitely has come across my mind that it could possibly be my last game.” He added of his time of Duke: “It’s a place that not a lot of people get the opportunity to go, and I’m just grateful that I’ve had the opportunity to play here and play for such a good coach and coaching staff and in front of the fans. I’ve loved every minute of it.” Follow Adam Zagoria on Twitter Follow ZAGSBLOGHoops on Instagram And Like ZAGS on Facebook

Fade for Cade: Minnesota, Detroit leading the Sweepstakes for Cade Cunningham, who dropped 40 on Oklahoma