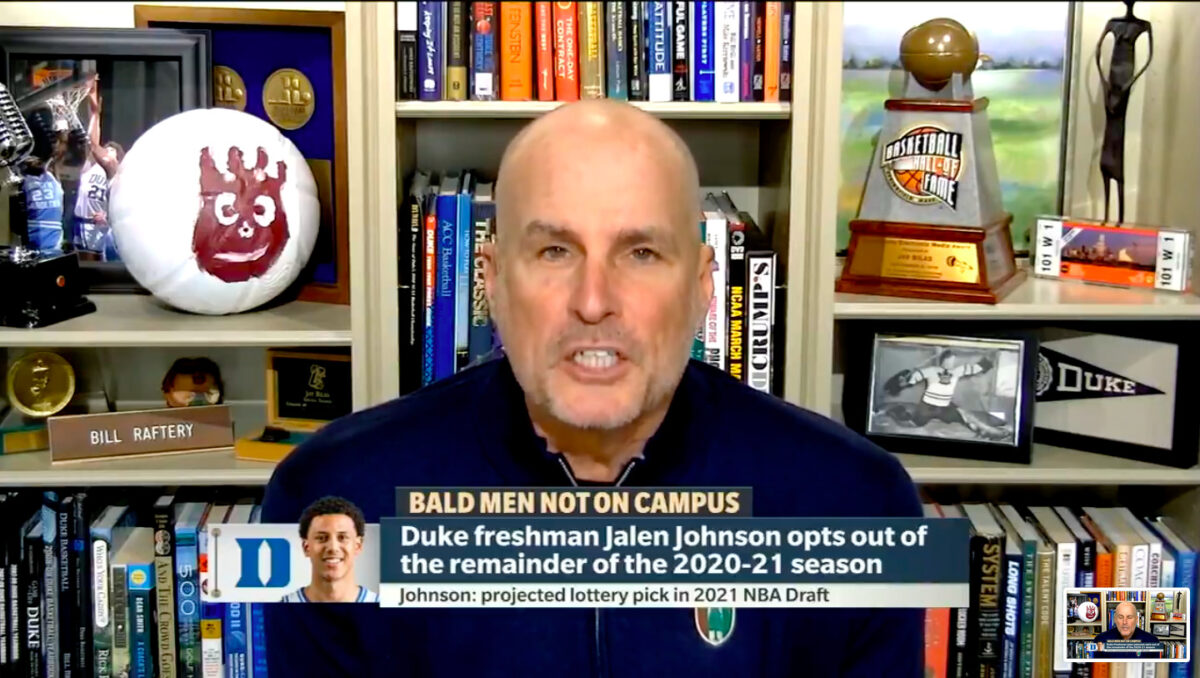 By JACOB POLACHECK Syracuse head coach Jim Boeheim made news Thursday when he said that Duke freshman Jalen Johnson was ‘hurting’ Duke and the team is ‘much better now without him. Boeheim’s comments have since been met with criticism from media and former players, including ESPN analyst and former Duke star Jay Bilas. Bilas, on his weekly ‘Bald Man’ on campus, responded to Boeheim’s comments that Johnson was ‘hurting’ Duke and the team is ‘much better now without him’. “The idea that somehow [Duke is] better without Jalen Johnson, I think, is patently false,” Bilas said Friday. “He was just doing some things and keeping other people from playing that are good,” Boeheim said. “They’ve had two monster wins since he’s opted out and they’re playing good basketball. They’ve got very good talent. You knew they were going to play out of this thing and now they’re playing well.” “But the other thing that disturbs me, and this is not just Jim Boeheim… The idea, somehow, that his family is considered a ‘camp,’ there are undertones to that, that are really disturbing. You know, [Iowa star] Luka Garza, we’ve got all these feature stories on Luka Garza and his parents, his dad working him out and being hyper-involved. Jalen Johnson has two parents, and he consulted his parents in making this decision. And his parents dealt with Duke, as did he.” Johnson missed three games this season due to a foot injury sustained in Duke’s Dec. 8 loss to Illinois. “Somehow the idea that, if he really cared about his health, he’d stay at Duke Medical Center, as if this is only one thing and they don’t have doctors where he lives. If he’s opting out for his draft status, he’s supposed to stay in isolation for how it looks — I don’t buy any of that.” Follow Jacob Polacheck on Twitter Follow Adam Zagoria on Twitter Follow ZAGSBLOGHoops on Instagram And Like ZAGS on Facebook