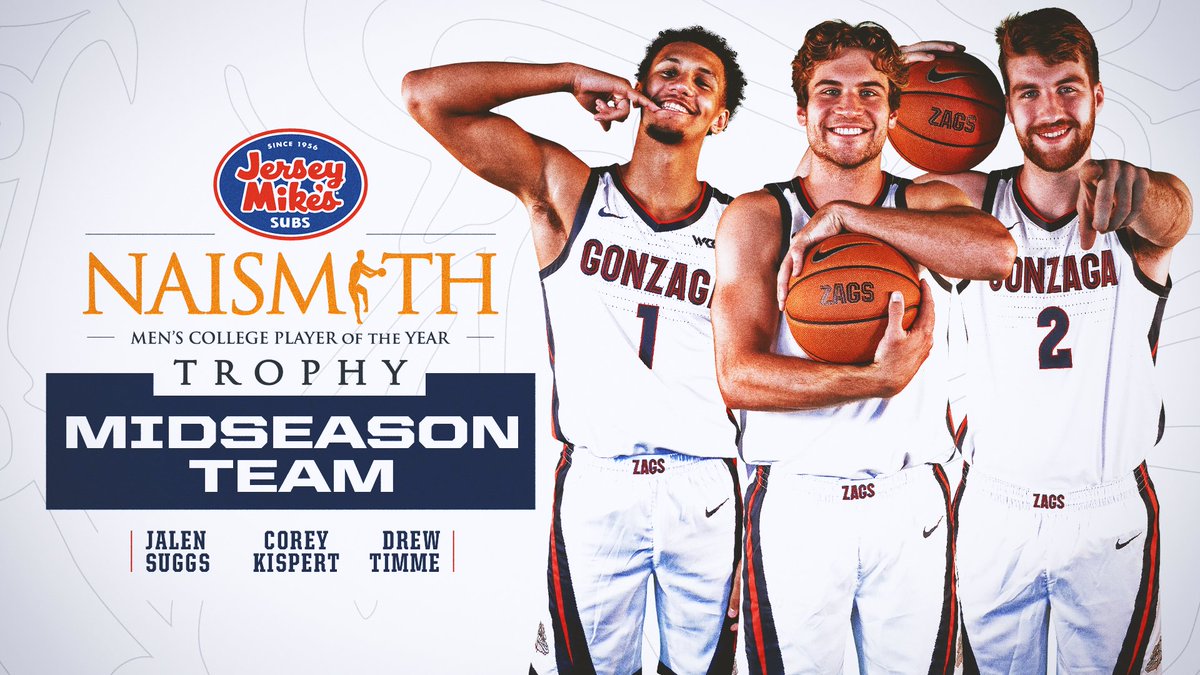 Gonzaga’s Corey Kispert, Jalen Suggs and Drew Timme were named to the 2021 Jersey Mike’s Naismith Trophy Midseason Team the Atlanta Tipoff Club announced Thursday. The list was narrowed to 30 players still vying for the Men’s Player of the Year honor. Gonzaga is the only program in the country with three selections on the midseason team. Baylor, Illinois and Villanova all have two names on the list. Kispert currently leads the West Coast Conference in scoring at 19.53 points per game, shooting 56.5 percent from the field, which is second in the league. He tops the WCC in three-point field goal percentage (48.3 percent) and is making a conference-best three threes a game. Suggs paces the WCC in steals per game averaging 2.18 per game. He is scoring 14.41 points per game, and is fifth in the league dishing out 4.35 assists per outing. The West St. Paul, Minn., native, has been named the West Coast Conference Freshman of the Week eight times this season. Timme is shooting a conference-high 62.5 percent from the field, including 64.2 percent inside-the-arc. He is second in the WCC averaging 18.89 points per game. The sophomore’s 7.11 rebounds per game ranks fifth in the conference, including third pulling down 2.42 offensive boards per contest. The 10 semifinalists will be announced on March 4, and the finalists will be revealed on March 16. The 2021 Jersey Mike’s Naismith Trophy will be awarded during the Final Four at the Naismith Awards Brunch on April 4. Follow Adam Zagoria on Twitter Follow ZAGSBLOGHoops on Instagram And Like ZAGS on Facebook

Will No. 1 Gonzaga and No. 3 Villanova play on Super Bowl Sunday?