Eric Dailey Jr. is making a name for himself on a loaded IMG Academy squad | Zagsblog
Follow @adamzagoria 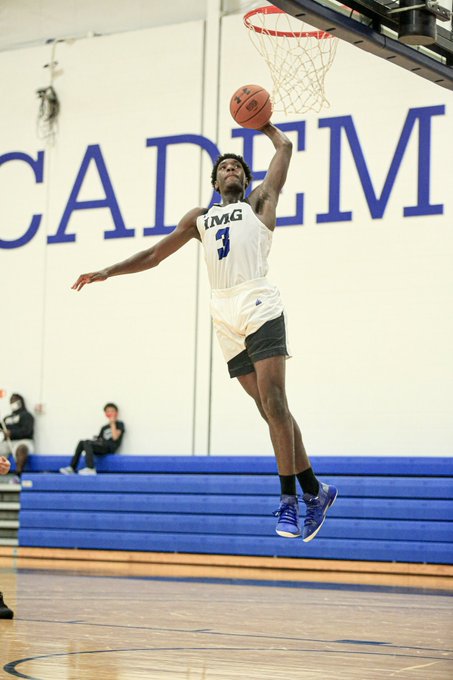 By JACOB POLACHECK In the world of high school basketball, perhaps no school has been a pipeline for elite basketball talent more than IMG (FL) Academy. With a 13-2 record to start the season, this year’s squad is once again filled with elite Division 1 talent, featuring Michigan signee Moussa Diabate and Texas signee Tamar Bates, as well as 2022 prospects Jarace Walker, Jaden Bradley, Noah Batchelor and Jett Howard. But perhaps the player that has improved his stock most this season for the Ascenders has been Class of 2022 forward Eric Dailey Jr. Dailey has excelled this season alongside elite talent, playing more of an off-ball role. “I can affect the game in many ways other than my ability to score off the ball,” he said. “I’m improving my defense so that I can become more of a two-way player.” Ranked by 247Sports.com as the No. 9 power forward and No. 39 overall prospect in the Class of 2022, Dailey says he’s looking to improve his ability to defend against smaller guards. “Once I get that done I’ll become a lockdown defender,” he said. Dailey, a 6-foot-7, 215-pound power forward Bradenton, FL, says that Michigan, Miami, Iowa State, Florida, Florida State and Texas A&M are working the hardest for his recruitment. “I’m looking for someone that I can relate and connect with,” Daley said. “[Someone] that’s going to push me and prepare me to go to the NBA.” He broke down each school: Michigan: “I would be a big part of their program a difference maker.” Miami: “It’s a good program and it’s close to home. They have good coaches that really care about their players.” Iowa State: “They are big on me and one of the coaches has known me since I was a baby. That relationship helps as well.” Florida: “My mom actually worked at Florida when I was younger and I loved being there. The coaches are there are great and they have been in contact.” Florida State: “They have a good program for big guards like me and they have a great coach that has experience with versatile players like myself.” Texas A&M: “I’ve known the coach since a kid because he used to coach at IMG Academy. The way they prepare their players for the next level is good.” Among the six schools working hardest, Florida and Florida State are yet to offer. In terms of a timetable, Dailey says he’s still waiting things out. “I’m just waiting on more offers then I’ll start making decisions,” he said. Dailey said there are two schools in particular he’s hoping jump into the mix. “I want Duke [to offer],” he said. “And I want Florida State. They’ve been talking to me.” Follow Jacob Polacheck on Twitter Follow Adam Zagoria on Twitter Follow ZAGSBLOGHoops on Instagram And Like ZAGS on Facebook