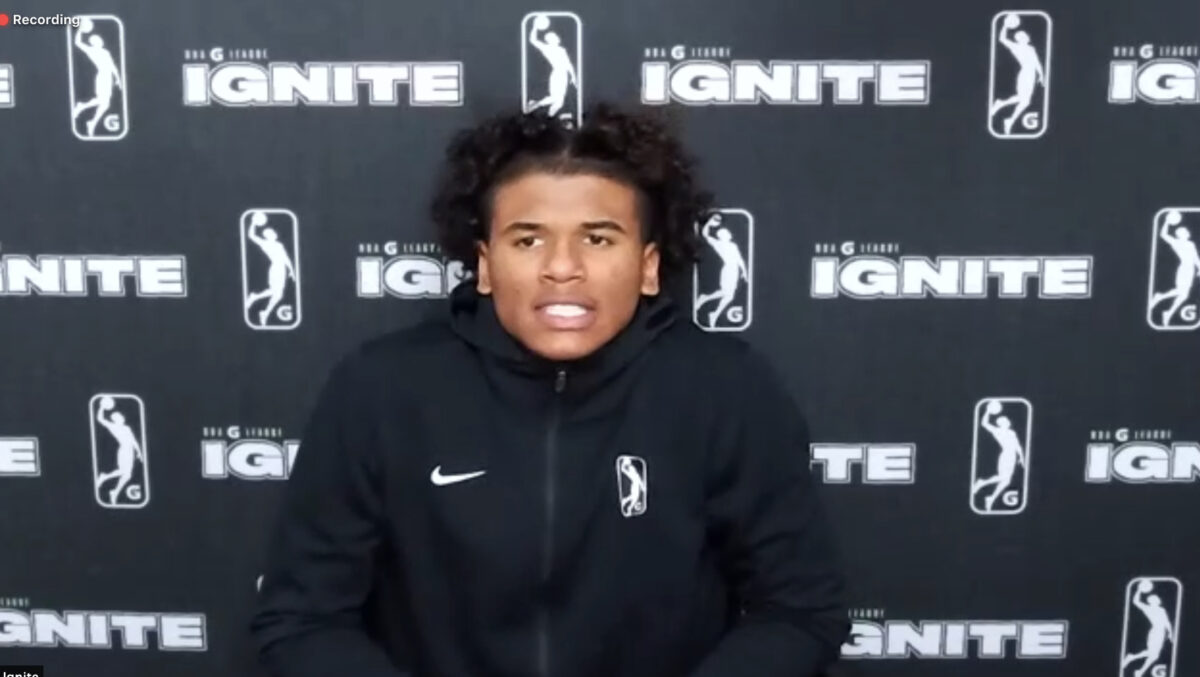 By ADAM ZAGORIA After months of living in a bubble in Walnut Creek, Calif., and only scrimmaging with their teammates, Jonathan Kuminga and Jalen Green finally got a chance to play real opponents. In their “pro” debut with NBA G League Ignite on Tuesday, the duo combined for 48 points in a game against G League veterans. The 6-foot-8 Kuminga went for 26 points on 11-of-15 shooting with 8 rebounds, and the 6-6 Green had 22 points on 8-of-15 shooting with 7 boards in a 113-107 loss. Both are projected Top 10 picks in the 2021 NBA Draft who opted to skip college for the first year of the new G League pathway program. Green said he would’ve attended Memphis had he gone to college, while Kuminga said he would have landed with his brother at Texas Tech. “My performance overall, I felt I could’ve done better,” Green said on a Zoom with reporters. “I feel you can always do better in a game. But today’s mindset going in was just trusting my teammates and looking for open guys and taking what the defense gives me.”

Green and Kuminga have been in a bubble, while their fellow classmates like Cade Cunningham, Jalen Suggs, B.J. Boston and others are playing college games on ESPN. “It’s real now, so that’s pretty much the biggest thing for me,” Green said. “We’ve been sitting here for four or five months now and we’ve improved a lot, learned a lot, so it was just exciting to show what we learned and how much better we got today.” In his first game since joining the team, Jeremy Lin played just a few minutes with Ignite, but did not score. London Perrantes and DJ Hogg led the vets with 18 points apiece and Isaiah Briscoe and Marcus Graves had 16 each. “It’s for sure been a learning experience because you’re going against grown men,” Green said. “From high school being able to do whatever you want, get to your shots to actually having to slow down and get to the spots that you want to, it’s not that much of a difference because when you’re younger you play up all the time….It’s a learning experience to get better.”

Reggie Hearn, a former G League player on the Ignite team, previously said Kuminga had the “ceiling” of Kawhi Leonard, but Kuminga said he’s not thinking ahead. “I’m not really into the next season, I’m just focused on this season and get through it,” he said. “I think we’re going to have a great great season and [get] improvement from everybody. It’s just going to be a great season, it’s going to be fun to watch.” Head coach Brian Shaw said of Kuminga: “He was very efficient…I don’t remember him missing too many shots. He hit threes, he took the ball strong to the basket, got a couple dunks, showed some mid-range game and got to the free-throw line. So he showed every level of the game. “And on the defensive end, he’s by far our best defender…We put him on the opposing team’s center and Jonathan’s big enough to be able to hold his own but can switch out and guard any other position. He can for sure guard 1-4, so all-around he had a great game for us.” Shaw previously said the schedule was “fluid,” but that he hoped the team would play regular G League teams beginning next month in the bubble outside Atlanta. As for his long-term goals, Green said, “My goal is to be a GOAT in the league.”

Here’s the box from the Ignite game.@jonathanKuming6 had 26 and 8, @JalenGreen 22 and 7

London Perrantes and DJ Hogg each had 18 for the vets, Isaiah Briscoe one of several with 16 pic.twitter.com/pEfvlwYDZC