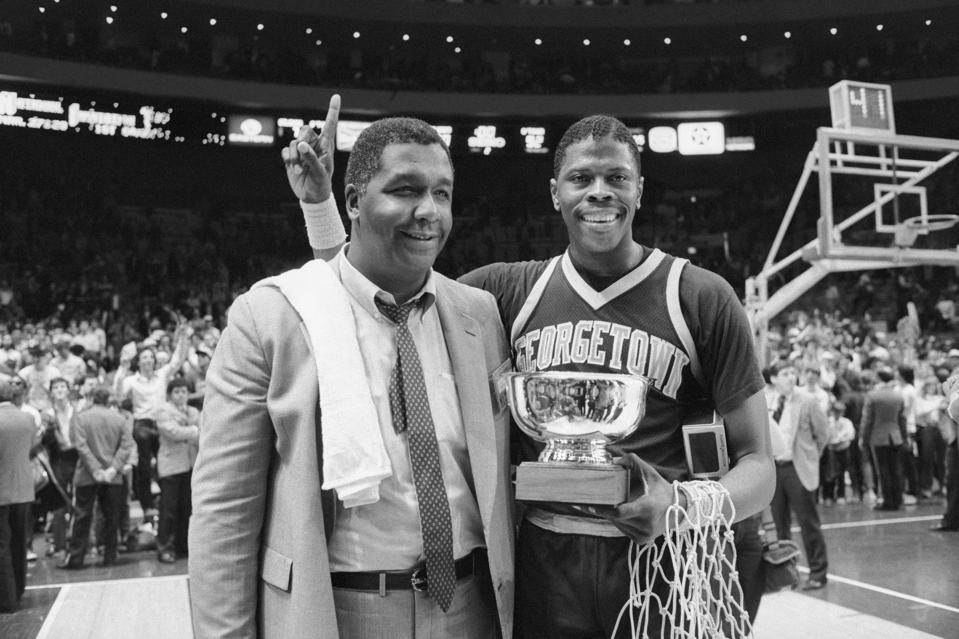 By ADAM ZAGORIA A number of college basketball coaches both black and white honored the late Big John Thompson by wearing a white towel draped over their shoulders on the first day of the 2020-21 college basketball season. Georgetown’s Patrick Ewing, for whom Thompson was like a father figure, Providence’s Ed Cooley, St. John’s Mike Anderson, Texas’ Shaka Smart GW’s Jamion Christian, Rhode Island’s David Cox, St. Peter’s Shaheen Holloway and Eastern Michigan’s Rob Murphy were among the coaches to honor Thompson. Michigan State coach Tom Izzo was among the white coaches to honor Thompson as well. “Coach Thompson is an integral part of my life,” Ewing said after the Hoyas 70-62 win over UMBC on the court named after Thompson. “I’ve had the opportunity to play for him, for him to be a mentor, friend, a confidante. I had the towel over my shoulder in honor to him.” Cooley said he plans to continue to wear the towel. “I plan on having a towel the entire year,” Cooley said ahead of his team’s 97-56 rout of Fairfield per FS1’s John Fanta. “I have a deep love for him. Still sad to this moment. He’s someone who inspired me. He spoke his mind on what was right, what was deserved, and I respect him for what he had to do to earn that right. He gave me hope.”

Coaches around the country, including @MSU_Basketball‘s Tom Izzo, honored late @GeorgetownHoops legend John Thompson with his trademark towel on the shoulder: pic.twitter.com/3YnrPQdbBS

Patrick Ewing and Ed Cooley among the coaches going with the towel to honor the late Big John Thompson who passed Aug. 30 pic.twitter.com/6MDCJto9rM

.@GW_MBB‘s Jamion Christian honoring the late John Thompson with his iconic towel over his shoulder. pic.twitter.com/nSXKGwpx6j

Providence Coach Ed Cooley has a towel over his shoulder in honor of Coach John Thompson.

Thompson is in the Providence HOF and has his #50 up in the rafters. pic.twitter.com/NHgLTDei0q

Thompson, who passed at 78 on Aug. 30, coached Georgetown for 27 years, leading the program to its only NCAA title in 1984 and becoming the first black head coach to win a major college championship. He was the head coach of the U.S. Olympic team in 1988 and also won two NBA titles with the Boston Celtics in 1965 and ‘66. Thompson was the winningest coach in Georgetown history with 596 wins and led the Hoyas to three NCAA Final Fours in 1982, ‘84 and ‘85. He produced four future Naismith Hall of Famers in Ewing, Dikembe Mutombo, Alonzo Mourning and Allen Iverson. “Coach Thompson was a person who I looked up to a great deal growing up,” GW’s Christon told ZAGSBLOG. “To see a man of that stature and with that kind of sense of purpose, He always fought for his players [and] I was amazed by that. “It’s a tough world when you fight for what you feel is right. Often times you’re alone in your pursuit but he was never afraid of that. He always did what he felt was right. We need more John Thompsons.” ESPN’s Myron Medcalf reported the plan by the black coaches earlier this week, pointing out that Thompson discussed the origins of the towel in his forthcoming memoir, “I Came As a Shadow,” written by The Undefeated’s Jesse Washington, T. “My mother used to wear a towel hanging over one shoulder when she worked in the kitchen,” Thompson wrote. “She’d use it to wipe her hands or dry a dish. When I started coaching at St. Anthony’s [High School], I draped a white towel over my shoulder during games as a tribute to her. She and my father didn’t come to hardly any of the games, but I felt them with me when I wore that towel.” Now a new generation of black coaches will honor him going forward. This post has been updated. Photo: Bettman Archive Follow Adam Zagoria on Twitter Follow ZAGSBLOGHoops on Instagram And Like ZAGS on Facebook