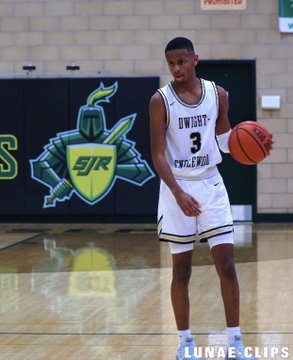 By JACOB POLACHECK Class of 2022 point guard Jayden Lemond says five schools are working the hardest for his recruitment. The 6-foot-4, 150-pound point guard from Dwight-Englewood (NJ) School, said that Michigan, Vanderbilt, Auburn, UConn and Stanford are in contact the most. He broke down each school for ZAGSBLOG Thursday: Michigan: “Coach [Howard] Eisley is showing a lot of interest in me. We talk on the phone a lot and he’s always checking up on me and making sure I’m good. He said he doesn’t really see a ceiling me for me right now and thinks my game can go beyond my expectations as long as I’m willing to put the work in.” Vanderbilt: “The Vanderbilt staff has just kept in touch with me and been showing a lot of interest in me. They got to watch some film on me from last year and they like me a lot and just want to see me play.” Auburn: “Coach [Ira] Bowman continues to check up on me each and every week just to talk about how I’m doing and even just the game of basketball in general, so that’s really good. We’ve built a better relationship for sure.” UConn: “Coach Kimani [Young] and the staff opened me with open arms when I was on the zoom call. It was my first call, so it was definitely special having both my mom and dad on there as well. They expressed to me their excitement to be back in the Big East and that was really cool to see. They showed me videos of the history of UConn and it was cool to see how long they have come as a program. Being in the 2022 class, they mentioned that this is the one of those classes you can’t miss out on and that really made me look at things differently.” Stanford: “[They were] just amazing. They are definitely one of those schools who look at things differently. They showed me a slideshow about the school and what they provide for student athletes, the athletes who train there in the off season and the programs that they provide around the campus outside of the basketball world. It was a call that made me look beyond my basketball career, so that was good. Overall, they like me a lot. They said I play like the guard that they had this past year in Tyrell Terry. They showed me some videos of him while I was on the call, and looking at him was like looking at me. The passes he just made were crazy and even from seeing that short clip he’s all about getting his teammates better, making the right pass, and knows when to takeover the game and that’s what you need to be able to do if you want to be a successful point guard.” Among the five, Auburn and UConn are the only two schools to offer Lemond. Lemond had a zoom meeting with UConn staff two weeks ago. “It went very well,” Lemond said. “They showed lots of interest and gave me a lot of good pitches.” Lemond’s latest zoom call was on Sunday with Stanford staff. Lemond says that the entire staff, aside from head coach Jerod Haase, was on the call. “It was a lot different than the UConn call,” he said. “It was really structured. They showed me a presentation about everything they provide, both on and off the court. Overall, it went really well.” Lemond said he’s looking at multiple factors when making his college decision. “The coaching style, if my play style is the right fit, what type of plays or sets do they run and a team with brotherhood mentality.” Follow Jacob Polacheck on Twitter Follow Adam Zagoria on Twitter Follow ZAGSBLOGHoops on Instagram And Like ZAGS on Facebook