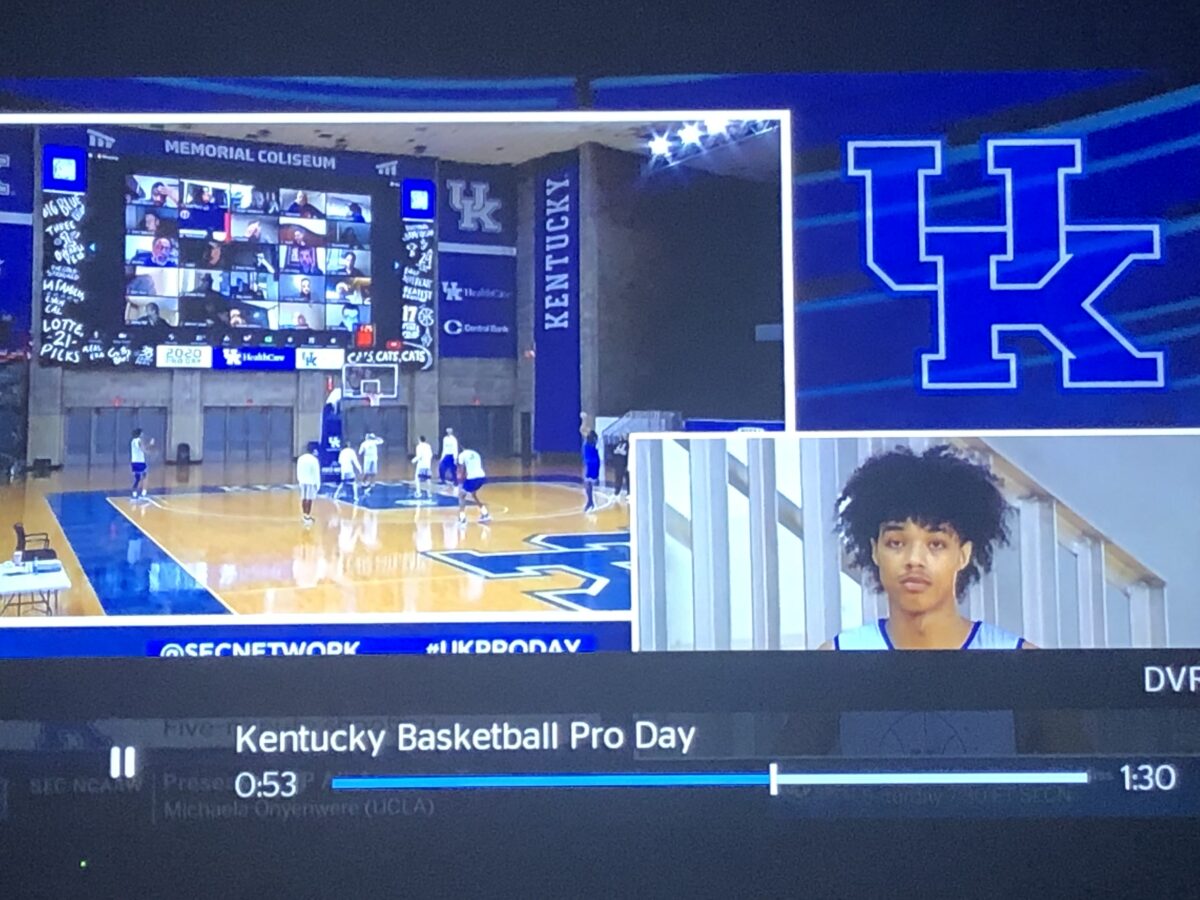 By ADAM ZAGORIA The pandemic didn’t stop John Calipari from holding the annual Kentucky Pro Day. More than 80 NBA personnel, including Miami Heat president and Kentucky alum, Pat Riley, on Thursday attended a virtual Pro Day aimed at showcasing Kentucky’s players. Freshmen wings B.J. Boston and Terrence Clarke are projected lottery picks in 2021, and the Wildcats as usual have a handful of NBA prospects. “By having this, two days of practice were unbelievable,” Calipari said on the SEC Network. “It was unbelievable because they were getting ready to be on TV and be [seen] by NBA coaches.”

Lot of mixed emotions today. Our #UKProDay tonight was great. I expected a good turnout, but I was really blown away to see more than 80 @NBA personnel tuning in virtually, including Pat Riley. Excited for our guys because they set a great tone for themselves and our team. pic.twitter.com/7dJrSgmCbT

Calipari and his coaches wore masks during the Pro Day, and the coaches on court wore gloves as well. Calipari urged Kentucky fans to “wear a mask please” to mitigate the pandemic. “For anybody that’s watching, any of our fans, this is especially for Kentucky, there now is a vaccine,” he said. “So within the next three months we may all be good. Don’t get sick and have something happen to you or someone in your family the last two months. “Wear your mask please and social distance. Don’t go into a bar, and if you do, separate….You can say whatever you want on the mask, say whatever, but wear it….Wear the mask, please wear the mask.” Calipari has previously said his team would shut down basketball activities for 14 days if someone tests positive for COVID-19. Seton Hall and UConn of the Big East have currently paused activities due to positive tests, and Marquette and Villanova did previously.

In the 10-plus seasons of the Calipari era, 38 players have been selected in the NBA Draft, more than any other school. Included in the recent run are 29 first-round picks, three No. 1 overall selections (Anthony Davis, Karl-Anthony Towns and John Wall) and 21 lottery selections. Twenty-nine players from Kentucky were on NBA opening-day rosters (including two-way and inactive lists), the most of any school. Thirteen former Wildcats were on rosters for the NBA playoffs, which also led the country. Anthony Davis became the first Calipari-coached player to win an NBA title with the Lakers, and Tyler Herro, Bam Adebayo and Jamal Murray excelled during the postseason. Using figures compiled by basketball-reference.com and spotrac.com, Calipari-coached players only (which includes Derrick Rose but not Rajon Rondo) have amassed more than $2.26 billion in career NBA contracts. In the 11 seasons Calipari has been the head coach at Kentucky, his players have totaled nearly $1.9 billion in NBA contracts. Picked second in the SEC behind Tennessee, Kentucky has 10 new players this season, and Calipari gave his usual spiel about trying to get everyone to “eat” so they reach their individual and team goals. When some of his current NBA standouts tell him they should’ve been allowed to be volume-shooters at Kentucky, Calipari said he tells them: “We had six players drafted, four lottery picks, because we did it together and everybody ate.” Follow Adam Zagoria on Twitter Follow ZAGSBLOGHoops on Instagram And Like ZAGS on Facebook