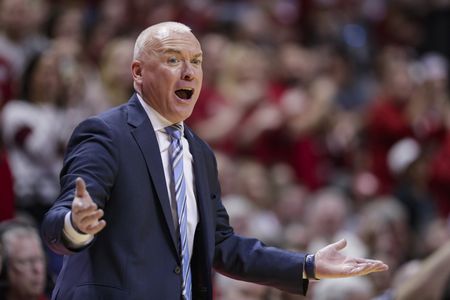 By JACOB POLACHECK Pat Chambers has resigned as Penn State’s head basketball coach, and Jim Ferry has been named the interim head coach of the program. The news comes after an internal investigation of new allegations of inappropriate conduct by Chambers, the school announced. Earlier this year, the The Undefeated published an article in which former Penn State guard Rasir Bolton alleged Chambers made a comment involving a “noose around [his] neck” and said that led him to transfer.  “I am so proud of all our program has accomplished these past nine years, and I will be forever grateful to the Penn State community for its ongoing support,” Chambers said in a statement Wednesday. “Anyone who has ever coached — especially at this level — knows the exceptional amount of energy and focus it takes to deliver each and every day. This has been an incredibly difficult year for me and my family, and we are in need of a break to re-set and chart our path forward. So, I’m taking a step back to prepare myself for the next 20 years.” He finished with a 148-150 record over his nine-year run as Penn State head coach. Chambers led Penn State to a 21-10 record during the 2019-20 season as the Nittany Lions were in position to earn their first NCAA Tournament berth since 2011 before the season was canceled due to the coronavirus pandemic. The 2020-21 college basketball season starts on November 25. When the Bolton story first surfaced in July, Chambers said: “I’ve realized the pain my words and ignorance caused Rasir Bolton and his family and I apologize to Rasir and the Bolton family for what I said. I failed to comprehend the experiences of others, and the reference I made was hurtful, insensitive and unacceptable. I cannot apologize enough for what I said, and I will carry that forever.” Penn State currently has three players committed from the 2021 class in Elijah Hutchins-Everett, Houston Mallette and TaQuan Woodley. This story has been updated. Follow Jacob Polacheck on Twitter Follow Adam Zagoria on Twitter Follow ZAGSBLOGHoops on Instagram And Like ZAGS on Facebook