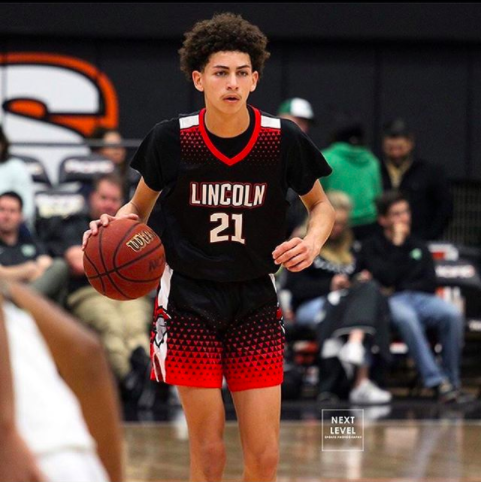 By JACOB POLACHECK Class of 2022 guard Miles Byrd has started gaining attention on the national-stage, but it hasn’t always been that way. “I kind of came out of nowhere,” he said. “A few people in the Bay Area knew about me, but not nationally.” Ranked by 247Sports.com as the No. 7 shooting guard in the Class of 2022, Byrd is now considered one of the top guard prospects in the west. The 6-foot-6, 165-pound shooting guard from Stockton (CA) Lincoln, currently holds offers from Cal Poly, Northern Arizona and Rice. He broke down each school: Cal Poly: “I’m really close with their coaching staff now, ever since the offer. I’ve been talking to them a lot and they’ve been showing a lot of love. Their pitch is that they need a long guard and they love the way I play and my feel. They called me to offer.” Northern Arizona: “My first offer was actually Northern Arizona. I had to call them because it was before June 15, but they said that they loved the film they were watching of me. That was out of nowhere. I was really happy for that one.” Rice: “They were the most recent one. I talked with coach [Derek] Glasser and he saw one of the games at the All-Academic camp in Arizona. He saw me play live, talked to head coach [Scott Pera] about it. They watched my film and loved the way I play. They thought I’d fit very well so they offered.” Byrd is also receiving interest from Cal, Stanford, UC Santa Barbara, Villanova, Yale and Princeton, among others. He met with Stanford staff by Zoom last week (Sept. 23). “They talked about how they’re interested and they’re really excited about me due to the fact that I have good grades and they think I have a lot of upside,” he said. “They were telling me about their program and how they think that they’re trending in the right path. “Just the fact that you could have the top education in the world, but also play against some of the top athletic schools in the world,” he said. “That’s crazy to me. They can do both for you, plus you leave with so many connections. A lot of the people that leave there have bigger checks than people that go to school for eight years. That’s crazy to me.” Byrd also talked with coaches from Santa Clara on Tuesday and Pepperdine on Wednesday. He previously met with Santa Clara coaches by Zoom as well. Byrd broke down what he’s looking for in a school when deciding where to commit: “I would say education is a big part as well as school history and what they can do with their graduates,” he said. ” I would say athletic department wise, just a place that has a nice culture. I want every single branch of the athletic department to have a bond, like a family in a family atmosphere.” Helping him throughout the process is Byrd’s father, Calvin, who was a McDonald’s All-American that played at Villanova from 1989-93. He also served as a Division 1 assistant coach with stints at Pacific, Loyola Marymount and San Francisco. “He knows the recruiting process from a player’s standpoint, but he was also a Division 1 coach for 18 years so that means he’s seen it from the coach’s point of view and the player’s point of view,” Byrd said. He’s given me plenty of tips of what not to do over social media.” According to 247Sports.com, Byrd is ranked as the No. 8 player from the state of California and the No. 42 overall prospect in the Class of 2022. On the court, Byrd describes himself as a “utility player”. “I can do anything a coach asks me,” he said. “I can guard the 1-5 positions. I’m also a pass-first kind of wing. I love dishing the ball and giving my teammates opportunities. “I think I’m trending in the right path, but at the same time I haven’t even touched the surface of my potential. I just have to keep working every day to get better and better and better. When that time comes, it’s going to be scary, really, really scary.” Follow Jacob Polacheck on Twitter Follow Adam Zagoria on Twitter Follow ZAGSBLOGHoops on Instagram And Like ZAGS on Facebook