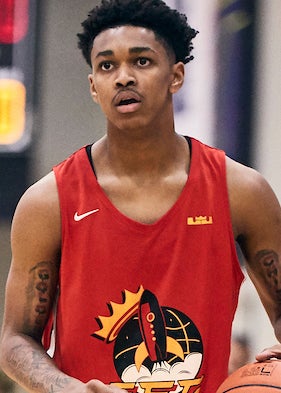 By JACOB POLACHECK Class of 2022 Syracuse basketball commit Dior Johnson has suffered a stress fracture in his foot. The 6-foot-3, 180-pound combo guard from Oak Hill (VA) Academy, had his foot placed in a cast on Monday. He is expected to remain in the cast for three weeks, per Syracuse.com. “He’s been working out,” Oak Hill head coach Steve Smith said. “He probably could have played with it, but he was having to ice his foot after workouts. I wanted to give him time to get it better.” Smith told Syracuse.com that he took a more cautious approach to Johnson’s injury because the highly-touted guard suffered a similar stress fracture in the fourth metatarsal bone. “By pulling him out of practice and putting him in the cast now, we caught it before it became a real problem,” Smith said. “He’s worried that he’ll get rusty, but he thought he was rusty when he got here and he was playing great.” The cast is expected to come off around Oct. 12 and Johnson is expected to return to court ahead of Oak Hill’s season-opener on Oct. 27. Ranked by 247Sports.com as the No. 3 overall prospect in the Class of 2022, Johnson committed to Syracuse back in February. Photo: Jon Lopez/Nike Follow Jacob Polacheck on Twitter Follow Adam Zagoria on Twitter Follow ZAGSBLOGHoops on Instagram And Like ZAGS on Facebook