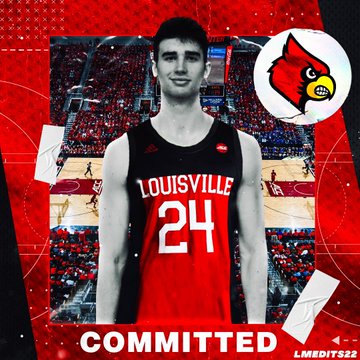 By JACOB POLACHECK
Gabe Wiznitzer, the 6-foot-11, 240-pound power forward from Hargrave (VA) Military Academy, announced his commitment to Louisville on Tuesday, via Twitter. Wiznitzer will reclassify to the Class of 2020 class and intends to redshirt the upcoming season. “Gabe has tremendous upside,” Hargrave Military Academy head coach Lee Martin said. “His ability to shoot and pass at a high level gives him an edge at his position. The ability to run your offense through Gabe is a huge asset.” Wiznitzer chose Louisville over schools such as Ohio State, Iowa, Xavier, Iona, Virginia Tech, Providence and Cincinnati, among others. According to 247Sports.com, Wiznitzer is ranked as the No. 26 power forward and the No. 132 overall player in the Class of 2020. Wiznitzer joins D’Andre Davis and JJ Traynor as the third member of Louisville’s 2020 class. The Cardnals will also bring in transfers Carlik Jones and Charles Minlend Jr.. Louisville also two 2021 commitments in power forward Bryce Hopkins and point guard Bobby Pettiford. Louisville is also in the running for JUCO guard El Ellis, who is set to announce his commitment on Wednesday. Ellis is also considering Texas Tech, Iowa State, UConn, Ole Miss, Oregon, Georgia and N.C. Central. This story has been updated. Follow Jacob on Twitter Follow Adam Zagoria on Twitter And Like ZAGS on Facebook