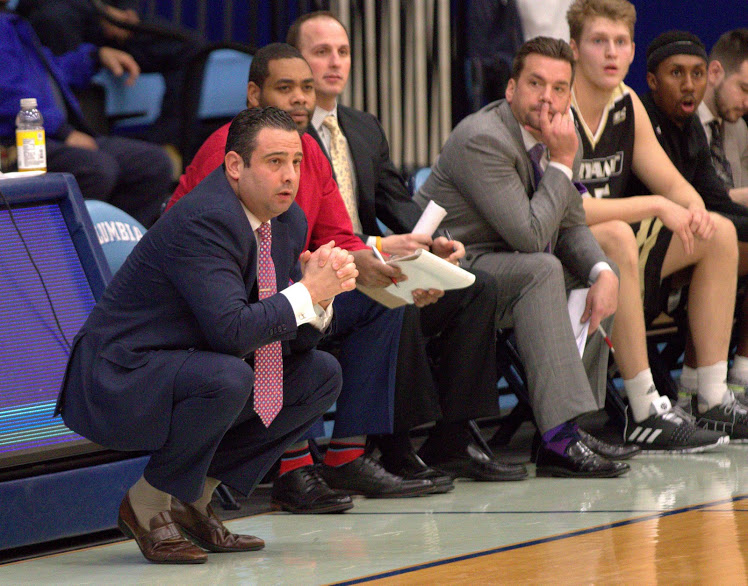 By ADAM ZAGORIA Monday was a busy day for college basketball coaches across America, but it’s possible no one was as active in terms of extending scholarship offers as Bryant’s Jared Grasso. The third-year Bryant coach extended 136 scholarship offers to players in the Classes of 2022 and ’23. At midnight on June 15, college coaches were first permitted to contact players in the Class of 2022 directly, while they could offer players in the Class of 2023 through their coaches. “My philosophy is that if one of those guys who are all my level, if not higher, want to commit to me today, I will take a commitment from one of them right now,” Grasso said by phone. “And I’m comfortable knowing if I can have my hands on them for the next two years and instill the discipline and work ethic and the things they need to be successful at the college level, I’ll have a better chance of them being prepared to play college basketball than a kid committing to me in July of his senior year — not having the relationship, not understanding the expectations of me and my culture. So for me, if I’m going to take a high school kid, for him to be prepared at the college level, I want to have the time to prepare them to be successful.” The irony is that Grasso said he can actually only take one or two prospects from the Class of 2022 because he has limits on how many he will accept. “I will take the best player in 2022 who wants to be part of building something special,” he said. Grasso said he personally called about 25-30 prospects, while his assistants called more than 100 total. “We started at midnight with some texts and were basically on the phone all day,” he said. Among the players Bryant offered was Roddy Gayle, a 6-foot-4 shooting guard from Youngstown (N.Y.) Lewiston Porter ranked No. 9 at his position by 247Sports.com. “Bryant texted my phone and wanted to reach me and gave me an offer Monday morning,” Gayle said. “I was very surprised they offered because I never heard anything from Bryant.” In addition to Bryant, Gayle reportedly heard from UConn, Georgetown, Seton Hall, Ohio State, Syracuse, Penn, Louisville, Marquette, Pittsburgh, Alabama, Rutgers, and Kansas. On social media, Bryant was listed among those schools as having contacted Gayle. That, in and of itself, has residual benefits for Grasso and his school’s brand. Among the other big-name prospects Bryant also offered were Dariq Whitehead, a 6-5 wing from Montverde (FL) Academy, who also holds offers from Auburn, Texas, Georgia, Maryland, Memphis, Texas A&M, LSU and Wake Forest, among others. Whitehead is one of the few prospects who could go straight from the preps-to-the-pros in 2022 if the NBA one-and-done rule changes. Mason Manning, a 6-1 point guard from First Love Christian (PA), added a Bryant offer to go with offers from Seton Hall, LSU, Ole Miss and Baylor, among others. In one Tweet from a recruiting reporter, Bryant was listed for Manning along with Virginia Tech, Ohio State, St. John’s and Florida State. “I was looking [at it] like this is crazy, but I also understand it in these times we’re in,” said First Love coach Khayre Wilson. “[Grasso] is telling young kids if you want to come the opportunity is here. I believe he will get some commits from this. I believe in what Jared does. Juan Cardenas, who came from Columbia to play for me one year of high school, played for him and his game improved. He’s going to turn that place into a winner.” Heading into another busy day on the phones Tuesday, Grasso said: “We’re casting a wide net and we’re not just going to recruit our region. The reality of it is, we want Bryant to be a national name, not just a school people in New England are talking about.” This post has been updated. Follow Adam Zagoria on Twitter And Like ZAGS on Facebook