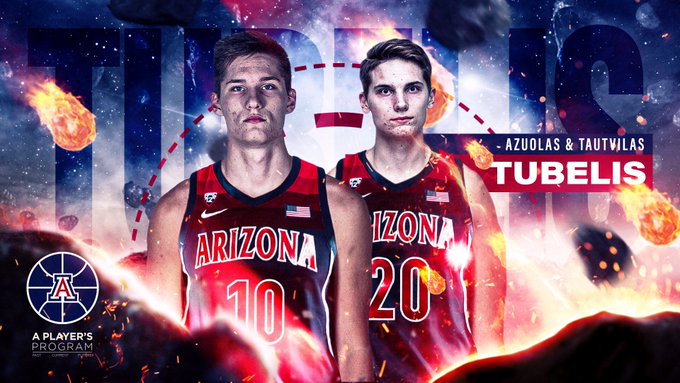 By JACOB POLACHECK Top international basketball prospect Azuolas Tubelis and his twin brother, Tautvilas, have signed with Arizona, ESPN’s Jonathan Givony reported Wednesday. Azuolas Tubelis, the 6-foot-8, 215-pound power forward, also held interest from Wake Forest and Kentucky. “Their campus is amazing, they have great fans and they are among best universities in college basketball,” Azuolas Tubelis told ESPN. “Arizona has had similar players, like Derrick Williams for example, who coach Sean Miller developed, and I believe that will help me.” In the 2019 FIBA U-18 European Championship, Tubelis averaged 14.9 points and 12.6 rebounds. He also won MVP of the ANGT Kaunas event in February, playing for Rytas Vilnius. He is considered the top European prospect in the 2020 class committing to the college route, per ESPN. Tautvilas Tubelis, the 6-foot-7 forward, played for Lithuania at the FIBA U16 European Championship in 2018 and spent the past four seasons at Vilnius Basketball School. Azuolas and Tautvilas are the sixth and seventh commitments in Arizona’s 2020 recruiting class. Six of the seven are international players and they come from five different countries. The Tubelis brothers join four-star forward Dalen Terry as well as international prospects Kerr Kriisa, Daniel Batcho, Benedict Mathurin and Tibet Gorener. Arizona now has 14 players lined up for 13 available scholarship spots, indicating that sophomore guard Brandon Williams likely will not return unless he is moved to a medical retirement scholarship. Follow Jacob on Twitter Follow Adam Zagoria on Twitter And Like ZAGS on Facebook

Mousse Cisse reclassifies to 2020, will pick college next week