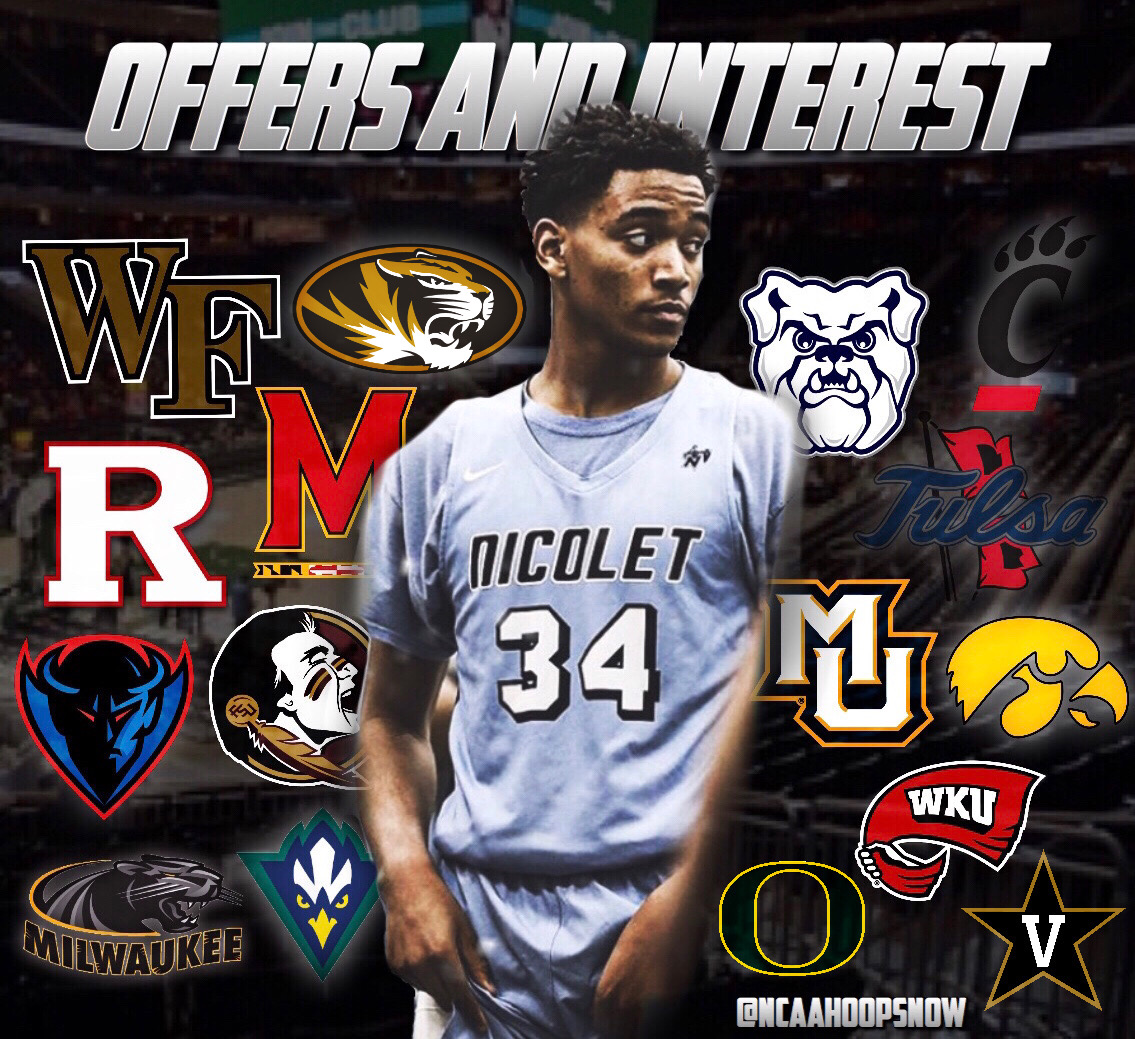 By JACOB POLACHECK After picking up an offer from Missouri, James Graham III told ZAGSBLOG Wednesday that he plans on cutting his list in the near future. “I would love to cut my list in a month and commit before my senior year,” Graham said. “I want to cut it down to around three to five schools. It depends because I’m still getting offers right now.” Graham, a 6-foot-8, 205-pound wing from Nicolet (WI) High School, broke down his most recent offer from Missouri. “They have a really, really, really good coaching staff. Coach [Cuonzo] Martin and coach [John] Poettgen, they’re calling me the most.” he said. “My biggest thing is having a great coaching staff that’s going to push you and that wants you to get better. They fit that really well. They really built a relationship with me and gave my parents the information they needed.” Graham says he plans on getting on a Zoom call with the Missouri staff in the near future to discuss how he’d fit with their roster. In terms of the schools working the hardest, Graham named Florida State, Maryland, Wake Forest and Vanderbilt among the schools in contact the most. He broke down each school: Florida State: “Florida State, the appeal to me is not only their coaching staff, but their fit. I’d fit really well in their lineup. I’m a lanky, big guard that can do everything and that’s what they’re all about. They preach shooting the ball. They preach pushing the ball. They preach shooting quickly. They preach hard nose defense. That’s everything I’m about.”  Maryland: “With Maryland, my biggest thing is they also have an amazing coaching staff that I’d really look forward to playing for if I do. Their coaching staff is really good. Coach Bino [Ranson] is a really good coach with a lot of experience. They know a lot of people. Another thing about Maryland is that they really talked about building a brand. If there’s something that you want to expand on, they’re willing to help you do that.”  Wake Forest: “They’re revamping pretty much. They’re like a rebuilding NBA team. They have a new staff. Coach [Steve] Forbes is a really good guy and they have a great staff. He’s talking about wanting to push the ball and get up the court. He wants to have big guards. They’re a revamped team with a fresh start and that’s really appealing to me.”  Vanderbilt: “Vandy hasn’t offered me, but I’ll talk about them. They’re taking the longest to offer me and you might think it’s a bad thing, but I think it’s a good thing. They’re really taking the time to build a relationship with me. I’m using this time to make sure Vandy is a fit for me and if they do offer, they’ll probably be in my top five when I cut my list. They like me and I like them. It’s really good. I like when schools take the time to build a relationship with me.” With a commitment expected before his senior year, Graham mentioned several factors for his decision. “The academics have to be good,” he said. “From then on, I’m considering have they produced pros? Is the coaching staff good?” Graham was expected to play AAU with Wisconsin Playground Club this summer, but due to the coronavirus pandemic, he’s instead had to work on his game elsewhere. “I have 24/7 gym access,” Graham said. “I’m working on getting quicker and becoming more of a guard. I’ve played the 3/4 position, but I’m working on becoming a consistent No. 2 guard for the college level.” Graham describes himself as a “sharpshooter” that can create for himself and others. “I have really good size and I shoot the ball really well,” he said. “I have all kinds of ways to score. I’m a working defender. I can defend really well even though I have to work on my help defense a little bit. My potential is out of this world.” Off the court, Graham is like most high school juniors, spending his time playing video games. “I’m a 2K freak,” he said. “I play tons of 2K. I played a ton of 2K before the virus and I play a ton now.” However, on the court, it’s a different story. “I never get slowed down,” Graham said. “I’m a competitor and I compete. I look at people like Jordan and Kobe with that work ethic and grind and that’s what I’m all about. I’m a fierce competitor.” Follow Jacob on Twitter Follow Adam Zagoria on Twitter And Like ZAGS on Facebook