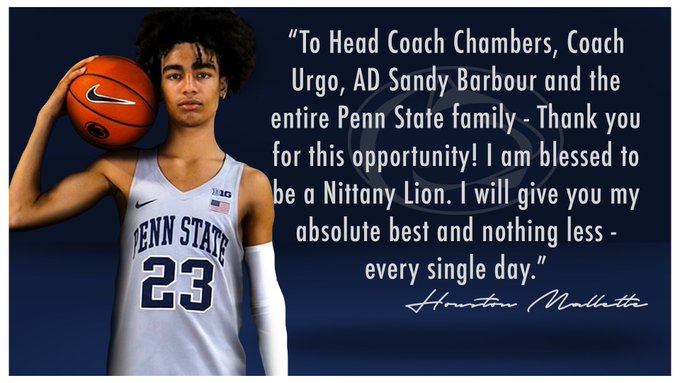 By JACOB POLACHECK Houston Mallette has committed to Penn State, he announced Friday via Twitter. “I considered a number of factors when making this decision,” Mallette told ZAGSBLOG via text. “Those included the academic offerings at the institution, the relationship with the head coach and coaching staff, the culture with the team and players, the leadership in the athletics department, the campus and student body and the opportunity to play at a very high level against the best competition in the country.” Mallette, a 6-foot-5 combo guard from Pacifica Christian (CA), took his official visit to Penn State from Dec. 6-8. He broke down his visit: “The visit was incredible,” he said. “I loved everything about it and the sense of pride that the Penn State family has was amazing! I’m Looking forward to be a part of that.” Mallette chose Penn State over schools such as St. Mary’s, Florida State, Pepperdine, Princeton, James Madison, George Washington, Long Beach State, Montana, Rice, San Diego, Santa Clara, UC Riverside, UC Santa Barbara, UNLV and Washington State, among others. “The Penn State family is going to get every ounce and more of passion, excitement, enthusiasm, and leadership that I can possibly give,” Mallette said. “They will get that every single day from me without fail. They’re going to get a kid who is a winner, a fighter, a kid who never quits, who understands the game at a high level, and is going to keep his teammates involved and make them better every single practice, film sessions, and game. They’re going to get a kid who is committed to winning.” He joins power forward TaQuan Woodley as the second commit in Penn State’s 2021 class. Follow Jacob on Twitter Follow Adam Zagoria on Twitter And Like ZAGS on Facebook