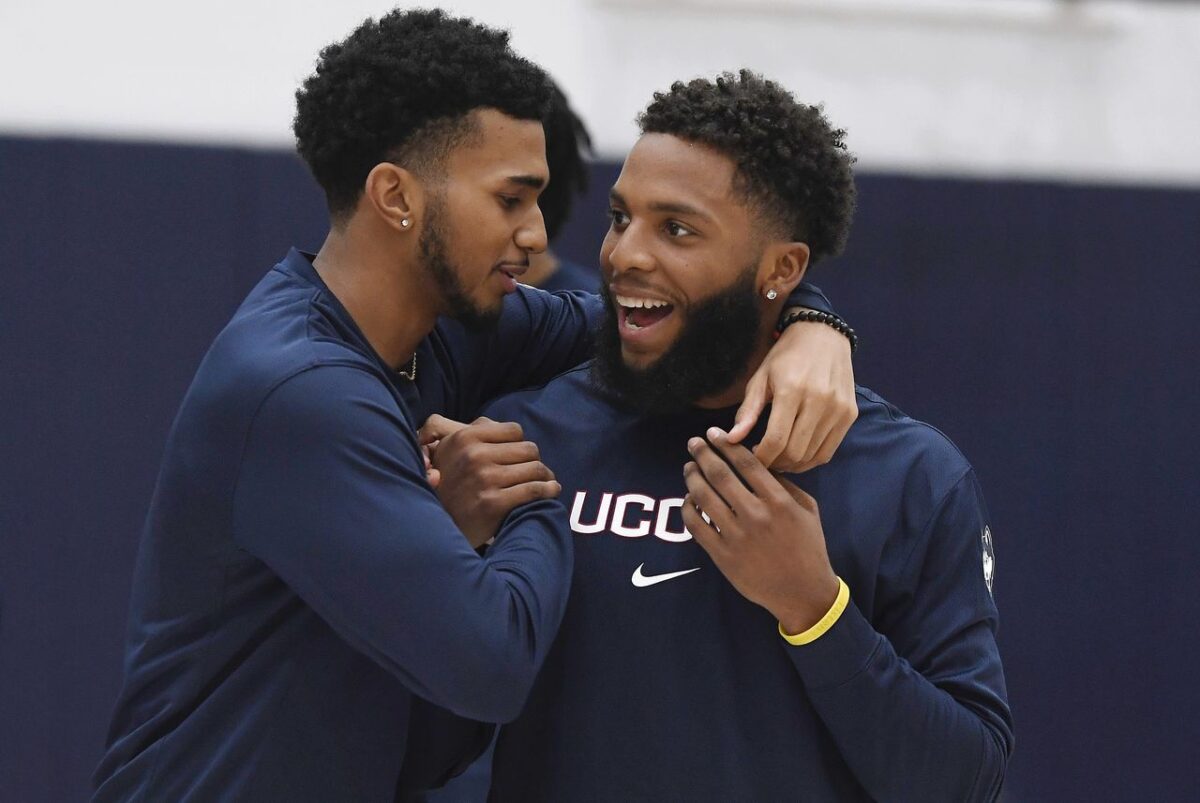 By ADAM ZAGORIA Go ahead and give UConn guard R.J. Cole an assist in the successful recruitment of Patrick School forward Adama Sanogo. Cole, the Howard transfer who will suit up for the Huskies this season, recruited the 6-foot-9, 241-pound Sanogo to UConn and turned up the pressure in recent days. “I talked to Adama for the past week and really turned the heat up this weekend,” Cole said. Sanogo committed to the Huskies on Tuesday over Seton Hall, Maryland and Nebraska, and figures to have an instant impact when the Huskies rejoin the Big East this season. Cole reached out last week to Patrick School assistant coach Joe Jordan, asking him for Sanogo’s digits. Jordan coached Cole during his freshman season at Newark Tech before Cole transferred to St. Anthony’s, once a fierce rival of St. Patrick and its predecessor The Patrick School. Sanogo becomes the second Patrick School player who will play for Hurley, the onetime former St. Benedict’s Prep coach, after being coached at The Patrick School by Chris Chavannes. Cyril Langevine played for Hurley at Rhode Island. Cole’s message to Sanogo? “I just emphasized the idea of Adama coming to be a part of something special,” Cole said. “Like Coach [Dan] Hurley said, ‘It’s coming.'”

Sanogo will now join what Hurley previously called “a strong core of guys” including freshmen guard James Bouknight and Jalen Gaffney who will lead UConn back into the Big East. Cole has seen video of Sanogo, who averaged 13.3 points and 7.8 rebounds for the Celtics this year and was a monster on the boards, out-playing Rutgers-bound big man Cliff Omoruyi on several occasions. “I’ve watched a couple games he’s a paint beast, controls the boards, can finish and block shots,” Cole said.

Cole averaged 21.4 points, 6.4 assists, 4.1 rebounds and 1.8 steals, with a 2.0 assist-to-turnover ratio en route to being named the MEAC Player of the Year sophomore at Howard two seasons ago. He believes he and Sanogo will complement one another. “We both love the pick-and-roll, so that should be nice to see but its not about him helping me,” Cole said. “He’s going to come in and help every person on the team.” Jordan, who has coached both players, thinks UConn is getting a pair of winners in Cole and Sanogo. “The greatest thing I can say about both young men is they are excellent people,” Jordan said. “Great dudes with beautiful hearts. But on the court, they are silent killers!” UConn already has several frontcourt players in current juniors Josh Carlton, Tyler Polley and Isaiah Whaley as well as redshirt freshmen Akok Akok and Richie Springs. They also bring in 7-foot freshman Javonte Brown-Ferguson from Canada. But Polley is coming off an ACL tear in January and Akok had Achilles surgery in February. One source said Akok is “looking good” and is targeting a return for Big East play in January. “We certainly won’t let either guy [Akok or Polley] on the court until they’re 100 percent and we’re especially going to be careful with Akok because it’s an Achilles,” Hurley said in March. Springs and Brown-Ferguson are both young players who may take some time to adjust to the college game. Sanogo has a body that is college-ready and should be able to make an impact from the get-go. “I think they need a post player, that’s what coach Hurley said,” Sanogo told 247. “He said if I work my ass off, and they’ll do a good job with me and they really need a post player. That’s the area, I can really help them.” Follow Adam Zagoria on Twitter And Like ZAGS on Facebook