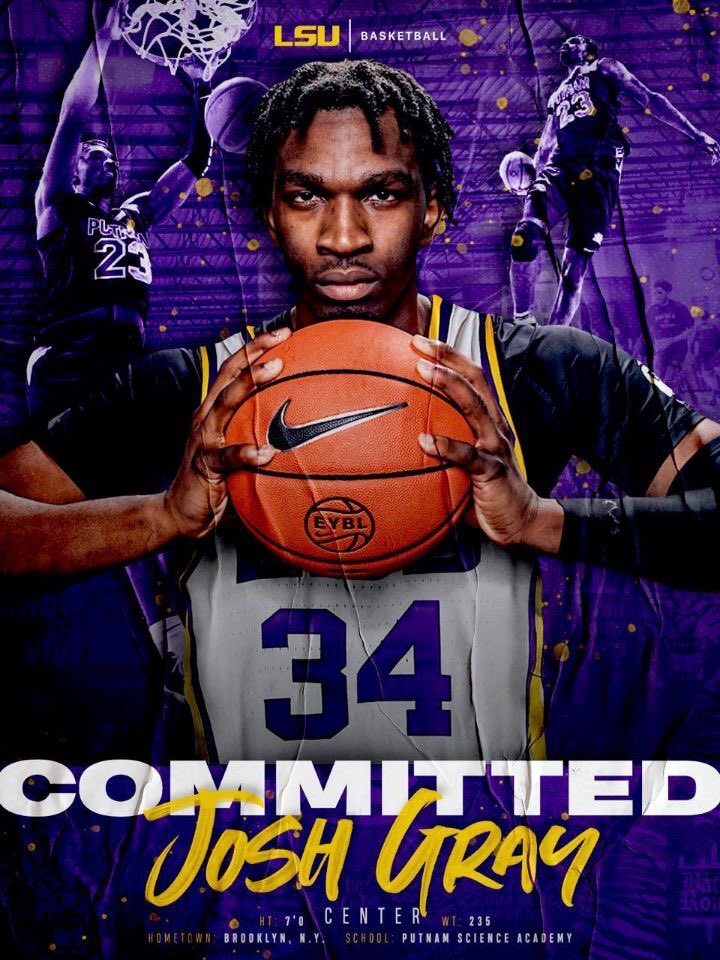 By ADAM ZAGORIA Josh Gray, the 7-foot big man from the PSA Cardinals and Putnam Science (CT), committed to LSU on Saturday. The Brooklyn native also considered Auburn, Providence Seton Hall and West Virginia. “I’m very excited about my commitment to LSU and the relationship I’ve built with coach [Will] Wade thus far,” he said. “LSU has a history of turning bigs like me into legacies and I can’t wait to see where this season takes me. “I chose LSU because I had the best relationship with the head coach out of all the schools that had recruited me, along with the fact that it has a historic franchise and a great recruiting class. This was a good choice in my opinion. I can’t wait to bring my skill set and my amazing personality to campus. Wait till they get a load of me.” Gray joins guards Cam Thomas, Eric Gaines and Jalen Cook, small forward Mwani Wilkinson and big man Bradley Ezewiro in LSU’s class. “Josh is in the 95th percentile in his class when it comes to protecting the rim and rebounding the basketball,” PSA Cardinals coach Isaac Green said. “Offensively, he puts tons of pressure on the rim for defenses and can catch the ball with two feet in the paint at will. He’s a super valuable addition to a program that’s won close to 50 games in the past two seasons.” Said Putnam Science assistant Josh Scraba: “Josh is one of the most physically ready bigs I’ve seen come out of prep school in my 11 years. His overall skill will catch up because he is a worker. He will bring a physical presence and elite rebounding from day one to LSU! One thing a lot of people don’t know about Josh is that he is a true student of the game. He may have watched and studied more basketball than any of his teammates this year.” Added Gray: “I improved my physicality this year. I’m athletic, and for a big man, I’m very agile on my feet.”