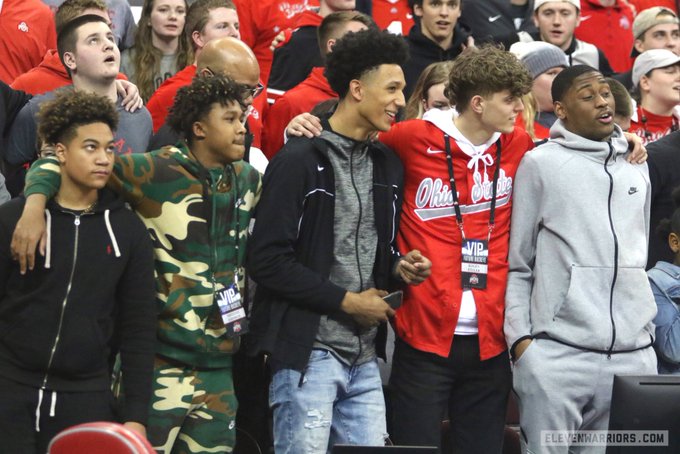 By JACOB POLACHECK Less than one week after taking an unofficial visit to Kansas for their 91-71 rout of Iowa State, five-star forward Kendall Brown was in Columbus for his second official visit to Ohio State from Feb. 21-23. “It wasn’t what I expected,” Brown said. “I didn’t know they’d be that big. The fan base is crazy over there and I have a really good relationship with the coaches. It was an overall good experience.” The 6-foot-7 Brown out of Sunrise (KS) Christian is the No. 5 small forward and the No. 16 overall player in the Class of ’21 per 247Sports.com. “They plan on using me all over the place as a big guard, initiate the offense, get people involved with my versatility and my passing ability,” Brown said on the Buckeyes. This was the second official visit for Brown after taking his first official to Marquette from Oct. 25-27. Brown has no upcoming visits planned and says he doesn’t plan on cutting his list until the summer. “I’m just taking everything in,” Brown said. “I’m going to see what everyone has to offer and just take it slow. I’m not trying to rush anything.” Brown mentioned Marquette, Ohio State, Kansas, Minnesota, Virginia, Vanderbilt, and Arkansas as the main schools involved for his recruitment. He broke down what he’s looking for while taking these visits: “Definitely my relationship with the coaches and seeing how I’m going to be used,” Brown said. “I’m also paying attention to the players.” Photo: Zack Carpenter/Eleven Warriors Follow Jacob on Twitter Follow Adam Zagoria on Twitter And Like ZAGS on Facebook