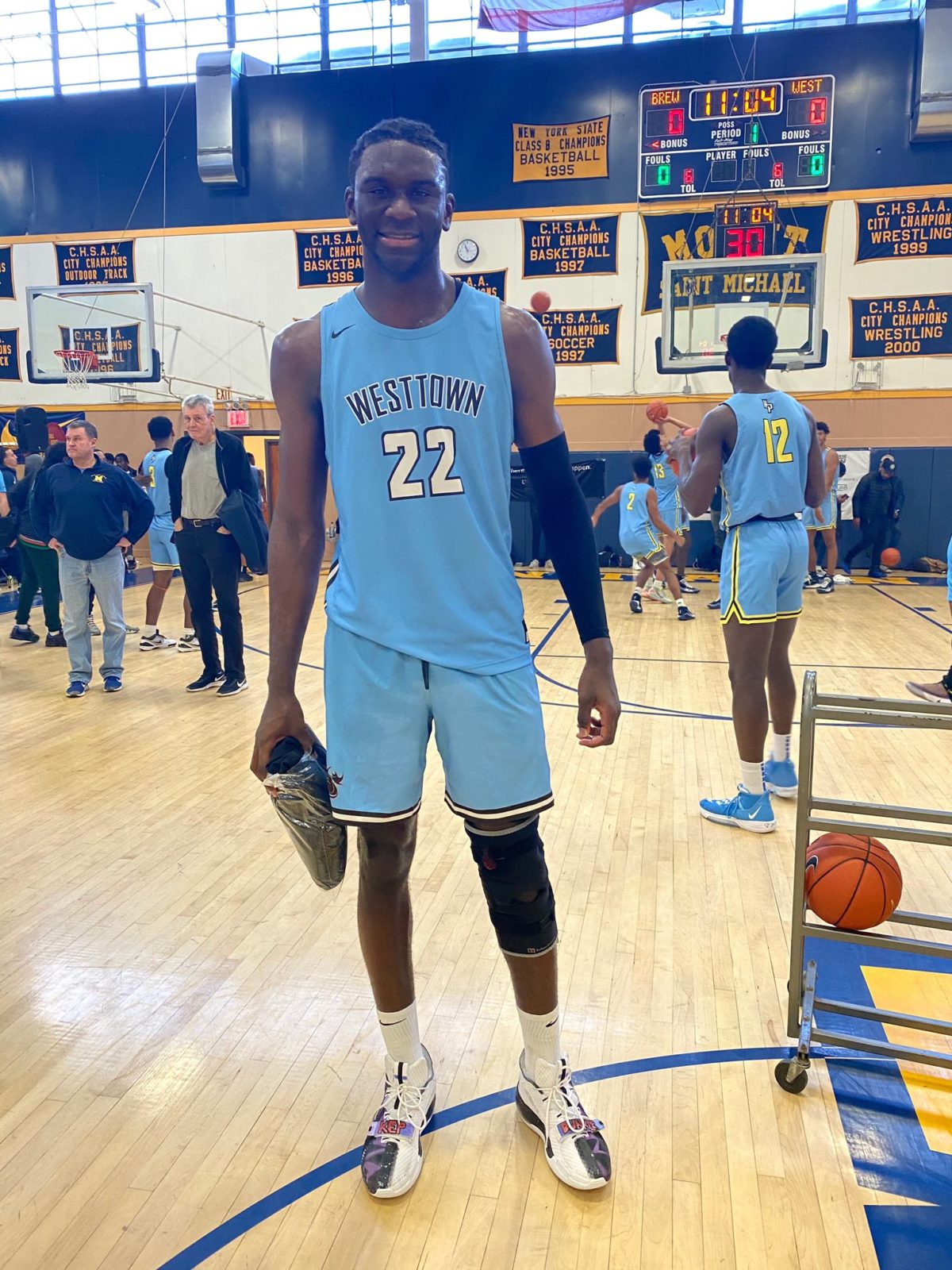 By ADAM ZAGORIA NEW YORK — Just a few years ago, Franck Kepnang was living in Cameroon in Central Africa. He came to the U.S. to pursue a better life through basketball, and now he’s one of the top players in the Class of 2021 and has become a top target for Kentucky. “[Coming to the U.S.] changed my whole life because it’s a good opportunity to be out there and that’s why I keep working and work so hard,” the 6-foot-11, 240-pound 18-year-old big man from the Westtown (PA) School and the PSA Cardinals AAU program said Sunday at the Empire Invitational in The Bronx. Kentucky coach John Calipari and assistant Tony Barbee sat courtside and watched as Kepnang, ranked the No. 3 center in his class by 247Sports.com, went for 11 points, 13 rebounds and 2 blocks in Westtown’s 70-60 loss to Our Saviour Lutheran. The Kentucky coaches made the trip to New York one day after hosting Class of 2020 power forward Greg Brown on an official visit during the Wildcats’ win over Alabama. St. John’s-bound guard Posh Alexander went for 20 points, 8 assists, 5 steals and 4 rebounds in the win. Kepnang was 5-of-5 from the field, including several dunks right in front of Calipari and Barbee. This marked the second time in two months that the Kentucky coaches have seen Kepnang in this gym. They saw him last month at the PSA Cardinals Showcase. “My mindset going into the game is just play my game,” he said. “It doesn’t matter who is out there watching. just go 100 percent, no matter what.”

The Big Fella @kep_dunker just threw down this dunk right in front of John Calipari and Tony Barbee https://t.co/xvDlE6hmUW

Kepnang said he hasn’t spoken in person to Calipari or his staff, and he has yet to officially receive an offer. “Right now I haven’t talked to them face-to-face yet,” he said. “I know it’s a very great program. Coach Calipari is obviously one of the greatest coaches in the country so I know for sure academically that they’re pretty good and also on the basketball court they’re great, too.” Asked if plans to visit Kentucky, he said, “I don’t know yet.”

Talking with Franck Kepnang about Kentucky, his recruitment and coming to the United States. Also said he models his game after Hakeem Olajuwon and Anthony Davis pic.twitter.com/X7ZZUp5UG8

Kepnang holds a slew of offers and mentioned Illinois and Washington among those involved. He also said “Villanova just talked to me a little bit. They haven’t offered. Right now I’m pretty wide [open].” Kepnang said he models his game after fellow African Hakeem Olajuwon and former Kentucky big man Anthony Davis. “On the post, I really look up to Hakeem Olajuwon,” he said. “AD is a player that can do everything on the court.” Kentucky has produced several NBA big men including Davis and Karl-Anthony Towns. Asked if that made their program more appealing, he said, “Definitely, I really like their program and it’s something that I will look forward to when I make my decision.”

2021 No. 18 recruit @kep_dunker running the floor and finishing. First touch other than a lob or tip looks just fine https://t.co/uGPYTLuNAM pic.twitter.com/aIZeG4JZV3

Kepnang didn’t take a 3-pointer on Sunday, but Westtown coach Seth Berger said Kepnang is shooting 34 percent from beyond the arc and “when he’s open we want him to shoot it.” “He’s become a pretty good 3-point shooter,” he said. “His hands have also significantly improved as a lob-catcher in the last year so as a screener, as a lob-catcher, he’s being to be for sure at an NBA level. Obviously, as a defender and rebounder his energy level is high.” Kepnang also runs the floor with a high motor and plays with great enthusiasm. After one dunk, he stomped the floor, flexed and let out a scream. “I think just showing the hard work,” he said. “Every play you just show 100 percent.” Follow Adam Zagoria on Twitter And like ZAGS on Facebook