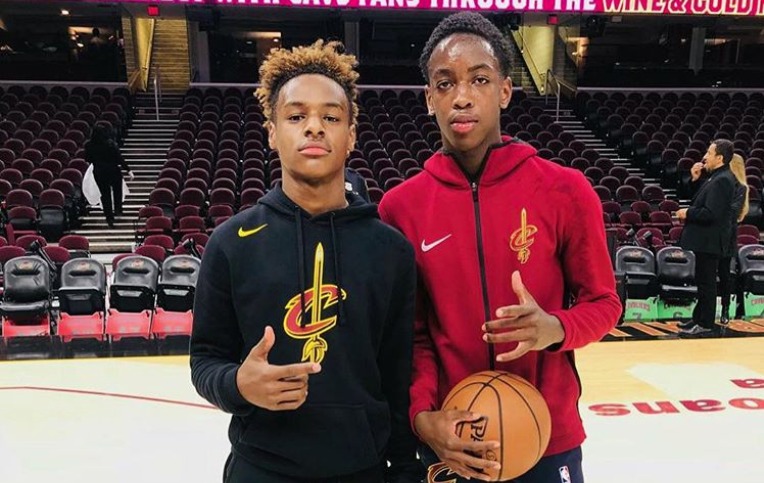 ESPN released its 2019-2020 ESPN high school basketball schedule and its heavy on Bronny James, Zaire Wade and Sierra Canyon (CA). Bronny James, of course, is LeBron’s son, while Zaire Wade is the son of Dwyane Wade. In addition to their appearance at the Hoophall Classic, Sierra Canyon makes an additional appearance on ESPN2 against Jonathan Kuminga and No. 4 The Patrick School, as well as another 13 appearances on ESPN3 throughout the season. Sierra Canyon also features the No. 5 senior recruit in Zaire Williams, as well as No. 9 BJ Boston, No. 78 Terren Frank and the No. 6 sophomore Amari Bailey. The full ESPN schedule is at the bottom of this post. All told, the ESPN schedule will feature a total of 37 games; 11 games available across ESPN, ESPN2 and ESPNU and 26 games available digitally on ESPN3. The slate will include 68ranked players combined from the ESPN 100 (’20), ESPN 60 (’21) and ESPN 25 (’22), and 17 programs ranked in the USA Today Sports’ Super 25, including every school in the top 12. Recruits showcased throughout the season have already committed to top college programs including Arizona, Baylor, Duke, Gonzaga, Kentucky, North Carolina, Michigan, Michigan State, Tennessee and USC. The television line-up tips off on Thursday, Dec. 5, with No. 5 Prolific Prep at No. 3 Hillcrest on ESPN2 with Prolific Prep boasting the No. 3 senior recruit in Jalen Green and Hillcrest the No. 7 junior recruit in Michael Foster. ESPN and ESPNU will air five games from the Hoophall Classic, held at the Springfield College’s Blake Arena in Springfield, Mass. on Sunday, Jan. 19 and Monday, Jan. 20. All five games will feature top 25 match-ups. Additionally, earlier games from the Hoophall Classic, taking place on Saturday and Sunday, will be available on ESPN3. Four games from Hoophall West, in Scottsdale, Ariz., will also be available on ESPN3, on December 5 and 7. A full breakdown of the schedule is below. Commentating team Ted Emrich and Paul Biancardi return to call the action for all games airing on ESPN, ESPN2, and ESPNU. “When you combine the abundance of nationally ranked teams and the nation’s most elite prospects, this year’s schedule is our biggest and best to date,” said Paul Biancardi, ESPN national recruiting director. “We will get to see seven of the top 10 senior prospects in the country, including No. 1 Evan Mobley, bringing an unmatched level of anticipation to fans everywhere” Biancardi joined ESPN in 2006 after a long coaching career that included coach of the year honors at Wright State University. In addition to providing college and high school basketball analysis, in 2008 he was named ESPN’s national recruiting director. This past summer Biancardi and ESPN reached a multi-year contract extension where he will continue to serve as the network’s national recruiting director, overseeing player rankings, as well as the lead high school basketball analyst and college commentator. “It has been a pleasure and a privilege to represent ESPN the last 12 years, said Biancardi. It is a humbling experience to serve fans across the world on the very latest recruiting news, as well as the best teams, players and coaches in the game of basketball. I am grateful to the outstanding group of people I work with and to cover a game that I have loved since grade school.” Highlights: 2019-2020 GEICO High School Basketball Showcase Schedule *Team Rankings are per USA Today High School Sports