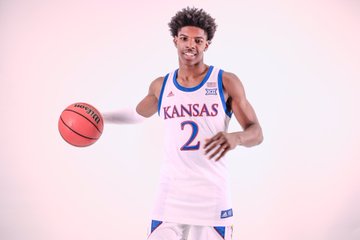 By JACOB POLACHECK KK Robinson, the 6-foot point guard from Bryant (AR), took his second official visit to Kansas this past weekend (Oct. 4-6) for “Late Night in the Phog”. Robinson broke down his visit for ZAGSBLOG Monday: “I loved it,” Robinson said. “The atmosphere in the Allen Fieldhouse was crazy! Being able to see Snoop Dogg [perform] was also a great experience.” In addition to Robinson, Kansas hosted a slew of recruits for Late Night, including 2020’s Isaiah Todd and Davion Bradford, 2021’s Javonte Brown-Ferguson, Kennedy Chandler, Kendall Brown, Roosevelt Wheeler and Tamar Bates. “They said they aren’t recruiting me to sit on the bench,” said Robinson on the Jayhawks. “They are recruiting me to make plays and to be one of the go to guys down line. Of course I have to earn it. Nothing is given.” Robinson also broke down how he would fit with the Jayhawks. “I think I’ll fit great in their system,” said Robinson. “Coach [Bill] Self has always done great with little guards as myself.” Before Kansas, Robinson took his first official visit to TCU (Sept. 27-29). “I had a lot of fun there with coach [Jamie] Dixon and the players,” said Robinson. “Coach Dixon has a lot of trust in me and wants me to come in right away to run the team.” “They like to play fast and in transition. That’s a big part of my game, so that’ll definitely be a good fit for me.” Robinson, who cut his list to seven in August, will visit Illinois this weekend (Oct. 11-13), before visiting Arkansas (Oct. 18-20). He is also considering Vanderbilt, Virginia Tech and Iowa State. According to 247Sports, Robinson is ranked as the No. 72 overall player in the Class of 2020 and the No. 2 player from the state of Arkansas. Follow Jacob on Twitter Follow Adam Zagoria on Twitter And Like ZAGS on Facebook

2020 forward Isaiah Todd to announce Oct. 17 between Kansas and Michigan