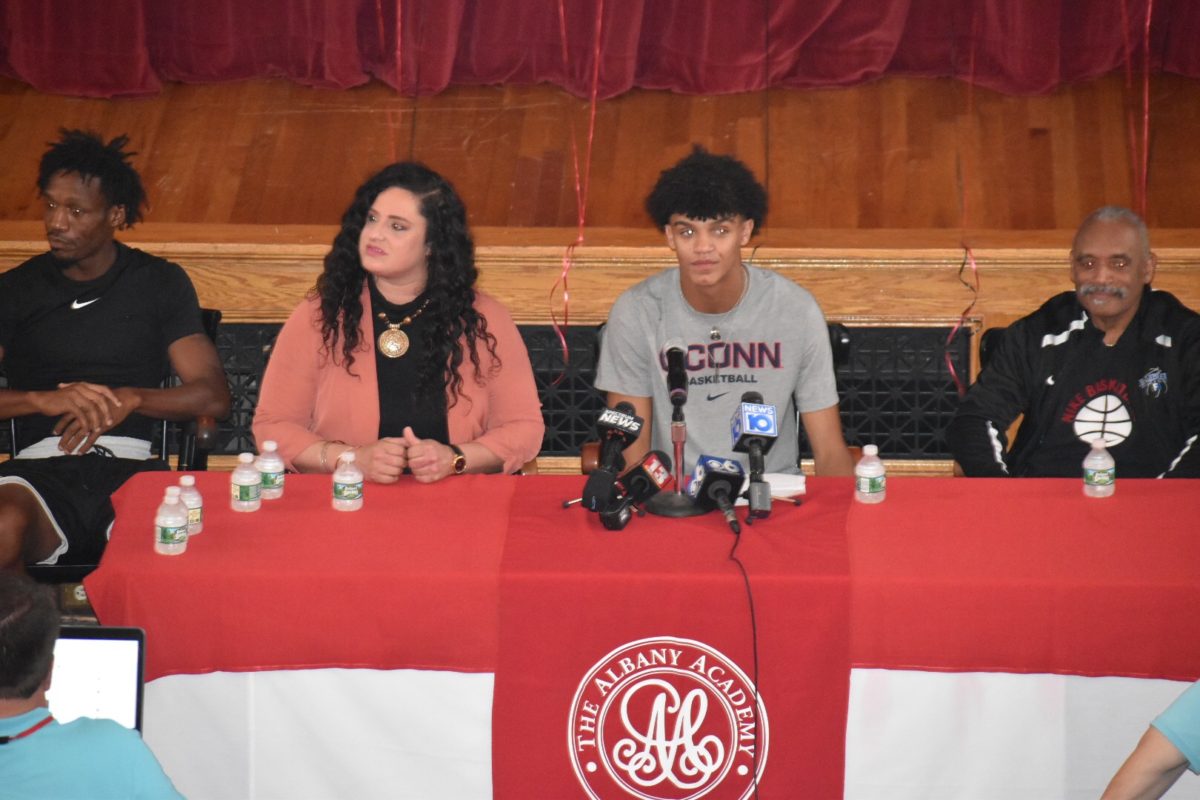 By ADAM ZAGORIA Coach Dan Hurley and the UConn Huskies scored a major victory in recruiting on Wednesday when Andre Jackson, the 6-foot-6 wing from Albany (N.Y.) Academy and the Albany City committed to the Huskies Jackson also considered Iowa, Syracuse, UCLA Maryland, but he canceled a visit to Iowa after visiting UConn weekend of Sept. 20. UConn assistant Tom Moore recruited Jackson for the last two years. “I will be joining Coach Hurley at UConn to be a Husky,” he announced Wednesday at his school. “They have a good message, they have a good play style for the way that I play,” he said recently of UConn. The guys around the program could fit into the way that I play, and their defensive tactics also fit. I like coach Hurley and I like the coaching staff. It was a nice visit, I definitely enjoyed it.”

“I will be joining Coach Hurley at UConn to be a Husky.” pic.twitter.com/OmVnHqhye6

He previously visited UConn last spring on a group visit with Noah Collier and Cam Thomas. Thomas will take another official to UConn weekend of Oct. 11. “I visited UConn a while back but it was a group visit so I didn’t get to see every part of the school,” he said. Known primarily as a slasher and defensive standout, Jackson averaged 16.5 points and 7.0 rebounds this summer with the City Rocks at Peach Invitational. “With his size and athleticism, he’s got elite NBA athleticism,” City Rocks director Jimmy Hart said. “So that being said, there’s a few of those that come along every now and then. What sets him apart from the other ones that do that, his ability to handle and pass the ball. He was a point guard for us since age 9, and then he grew all of a sudden so he’s played a lot of in his career. “He can really find shooters and has great court vision for a guy who’s pushing it at that pace. Some guys who jump will do a great dunk when they’re wide open, this guy dunks violently on people. I mean, he’s aggressive. He attacks the rim with no fear. Great instincts as a defender and his shot is getting better.” Hart believes Hurley will coach him up even more. “Well, Danny gets the most out of his guys,” Hart said. “He’s a tough guy and I think that’s why he’s choosing Danny. He’s trying to get with a head coach that he feels is going to push him real hard and get the most out of him and not leave any stone unturned. He’s opting for tough coaching. And his high school coach is a tough coach, too.” Last season at Albany Academy, Jackson averaged 18 points, 10 rebounds and 5.1 assists while shooting 68 percent from the field, 45 percent from deep and 70 percent from the line. “I think he’s done a lot of work this summer in terms of his perimeter game,” Albany Academy coach Brian Fruscio said. “But he’s so much than just a defender or a transition guy. “He’s a passer, he’s a winner, he’s a competitor. A lot of these kids don’t compete, Andre competes. I’m excited his future. I think he’s going to keep growing as a player no matter where he goes.” Asked what he needs to work on, Fruscio said: “A more consistent outside shot but he’s addressed that over the summer and he’s going to have a green light to shoot for us this year. And he’s been making a lot of them in open gyms so I have an expectation he’s going to make a bunch.

As an upstate New York guy, Jackson is familiar with Syracuse and has visited several times before. In the end, he chose a future Big East outfit in UConn over a former one in Syracuse. “Syracuse, in a way they’re kind of the same as Iowa in the way that they want me to play.,” Jackson said. “They want to increase their pace of play to get me downhill screens, try to get me to play at the bottom of the zone. My length would be good in the zone and all that kind of stuff, and I definitely agree with a lot of stuff that they say. And they’re pretty good.” Jackson is UConn’s first commit for 2020. He has been in touch with several uncommitted big men about joining forces, including Roselle (N.J.) Catholic big man Cliff Omoruyi, who is being courted by UConn, Kentucky, Memphis, Arizona State, Rutgers, Auburn, Miami N.C. State, among others. “I talked to Isaiah Jackson about Syracuse, talked to Cliff from Roselle Catholic about UConn,” he said. UConn remains in the mix for several elite 2020 players, including Omoruyi, Thomas and Brewster (N.H). guard Kadary Richmond. Photo: Marisa Jacques Follow Adam Zagoria on Twitter And Like ZAGS on Facebook

Mark Williams down to three schools, will announce Nov. 1 (UPDATED)