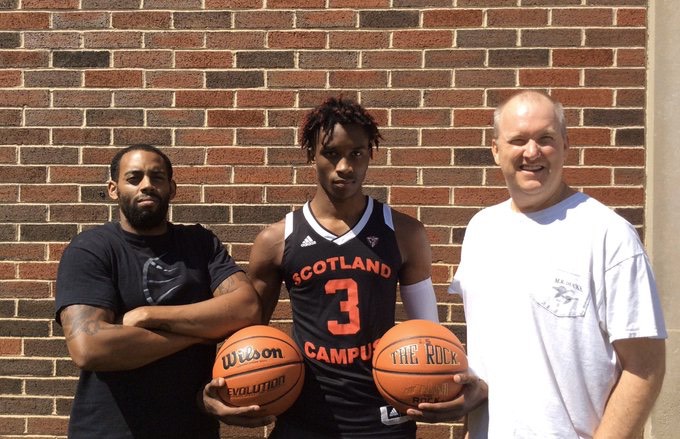 Class of 2020 Scotland Campus guard Norance Berry will visit West Virginia University unofficially this weekend. The athletic, 6-foot-3 guard from Cleveland, Tenn. has seen his stock rise since averaging 15 nine rebounds for BMAZE Elite 17U on the Under Armour circuit . “Cal and Kansas State are recruiting me the hardest right now,” said Berry, who was recently offered by Tulsa and Toledo and also from Tennessee, Auburn, LIU-Brooklyn and several others.  He will take his first official visit to Toledo on the weekend of Oct. 4-6.
Bringing defensive tenacity and added range on a now dependable 3-point shot, Berry has the potential to play a major role under Chris Chaney at Scotland Campus.

The Knights went 36-2 last season, as the school earned a berth in the Prep National Championship game at Connecticut College. They ultimately fell to a loaded Brewster team featuring Berry’s former teammate and close friend Jalen Lecque. The pair played together during their stay at The Christ School in North Carolina. “Spending two weeks with coach Chaney and Bobby (Maze) before the UAA finals, that really helped me shoot it better,” said Berry. “We were in Knoxville at our home court and they basically told me I need to improve my shot to get more offers. That was the one knock game for four months. They showed me had to fight for my feet and lift on my shot and basically same form every time. Since then, I’ve developed my form and my shot has been steadily improving.” Maze, who starred at Tennessee and played professionally overseas, has been a mentor to Berry since he was 14. “I’m a guard who really likes to defend and I think I can be a knockdown shooter in college,” Berry explained. “I like to rebound and I think that really sets me apart as a guard as far as being involved all the time.” Northwestern has also reached out about Berry, who possesses a 6-foot-10 wingspan. “We’re going to have a lot of expectations for (Berry) as far taking on the leadership role and really being the he is,” Chaney said. “With the way he defends and the IQ and toughness that he brings, he’s going to help not only our team but his recruitment.” Berry will play alongside his AAU teammate in Darlinstone Dubar, for Scotland Campus this year.  “He knows my game really well. I know when he’s going to throw me a lob, he knows when I’m going to find him for a good shot. We each other’s . We just connect on the court. Playing for BMaze, D-Stone and I really went to work.” Berry, Dubar, 6-foot-6 sharpshooter Jayson Woodrich and 6-foot-7 wing Noble Crawford (who was previously at West Oaks Academy) will all visit West Virginia unofficially . Follow Zach on Twitter Follow Adam Zagoria on Twitter And Like ZAGS on Facebook