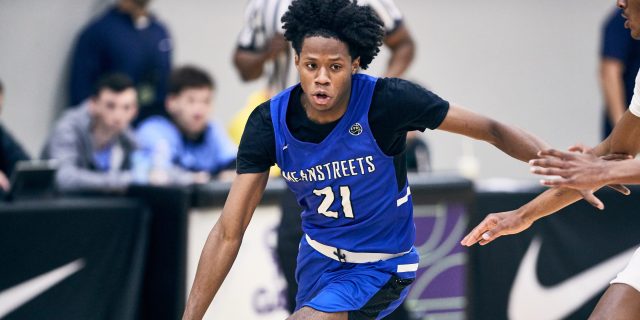 By ADAM ZAGORIA DJ Steward, the 6-foot-4 combo guard from Whitney Young (IL) and the Mean Streets AAU program, is being heavily pursued by Duke, North Carolina Kentucky, among others. Louisville, Iowa, Iowa State, Texas, DePaul and Notre Dame had offered before Peach Jam, he said. Steward will be in attendance this weekend at the USA Basketball mini-camp, where coaches from many top schools are expected to watch him and others. “A day after Peach Jam I got an offer from Duke and a couple North Carolina offered too,” he wrote in his USA Today blog. “Kentucky is on my pretty hard. talking to Coach Payne and he told me that I’m a priority, and I have to get on the call with Coach Cal pretty soon. “I feel like I’ll get an offer from them soon. I know I’m looking forward to to him. “It’s wild.”

Duke Coaches Offered Him After the Game! Then UNC… @swipasnipa GOES OFF at Nike Peach Jam! Full Video: https://t.co/h2gzv3f6YV pic.twitter.com/QnKrOHdDHW

Steward said several Duke commits and incoming players have already contacted him. “I’ve had players hit me too; Jalen Johnson and Jeremy Roach have my ear a lot lately trying to get me to join The Brotherhood,” he wrote. “I’ll look to start taking visits once I get the list down.” Photo: USA Today Follow Adam Zagoria on Twitter And Like ZAGS on Facebook