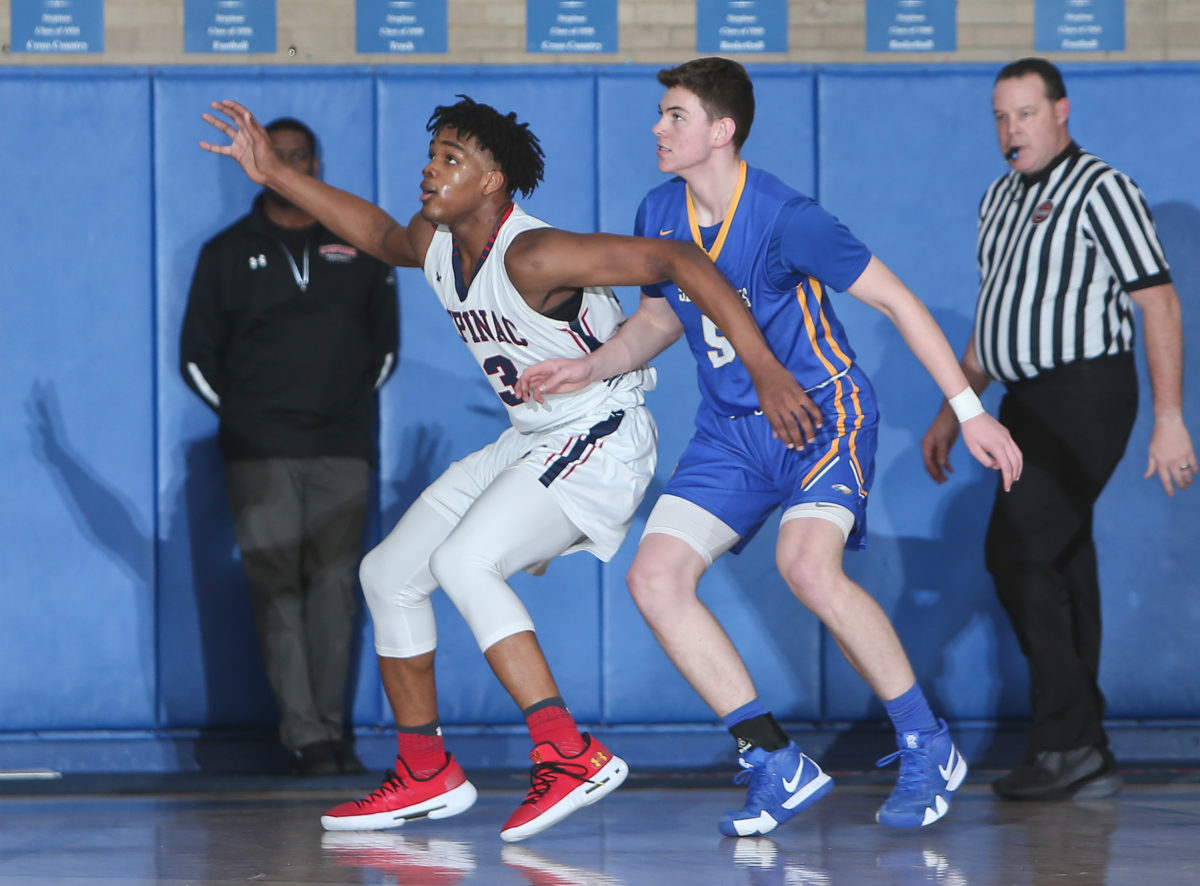 By EUGENE RAPAY NEW YORK — Archbishop Stepinac (N.Y.) head coach Pat Massaroni is expecting big things from his big man Malcolm Chimezie. Now that Chimezie is on a path to be fully healthy, the rising junior forward is relishing in the opportunity to make his mark alongside consensus five-star prospect A.J. Griffin and scoring machine R.J. Davis, whose recruitments are taking off. The 6-foot-8 Chimezie hopes to create his own buzz and success on the court now that he has recovered from a knee surgery that took place shortly after Stepinac’s high school season ended. “Anytime somebody gets surgery it’s kinda scary,” Massaroni said of Chimezie. “The biggest thing is that he rehabbed and that he’s kept his mental state in a good spot and he continues to want to work and get better, that’s where he’s at right now.” Over the weekend at the New York Catholic League Team Camp at Archbishop Molloy High School, Chimezie picked up offers from Marist, Siena, Stetson, Stony Brook, UMass, Canisius, St. Peter’s,
Bryant, Manhattan Columbia. He says that Columbia, Fordham, Holy Cross and Hofstra have also expressed interest. Chimezie is known for being an imposing bruiser in the post on both ends of the court, using his strength and athleticism to bully opponents but also clean up the boards. This toughness was on display this past winter. Not only did he help Stepinac return to the CHSAA AA title game, but he did so with a tumor in his knee. He was sidelined for two months, as he rehabbed his knee and recovered from surgery, but returned to basketball activities in mid-May. “I had the injury before the season, but I didn’t want to get [surgery] before it started, so I was toughening it out,” Chimezie said. “I got surgery after the season, before AAU and stuff, so just trying to get back. My surgery went really well. My recovery is going really well. I’m feeling better every day, my knee is feeling better every day. Conditioning will be the biggest.” On Saturday, Chimezie didn’t miss his stride. He anchored the paint on both ends of the floor during Stepinac’s win over St. Peter’s. The Eagles couldn’t match his physicality down low, as he finished under pressure, found open teammates, fought for rebounds, and denied entry into the post. “I’ve worked on my post moves, my rebounding, looking out the post–seeing my teammates,” Chimezie said. “Before, when I got the ball, I was like a black hole. I would just go straight to work. Now, I’m trying to find my teammates better, rebound the ball, get into the guard furthest ahead and try to get the transition going. After I do get the transition going, try to run to the rim and be a rim runner and post player.” While most of the schools involved for Chimezie are in the local area, the proximity to home isn’t exactly a requirement for him. “It depends on the school that’s best for me,” Chimezie said. “I’d like to be close to my mother or where I grew up, but the school that’s best for me–that’s where I’m going.” Chimezie still has time to sort through the collegiate conversation, and he intends on working to improve his conditioning and prepare for a busy summer and the upcoming high school season. He feels this year, combined with his experience of playing varsity since freshman year and now being fully healthy, will be his opportunity to truly prove himself to colleges and scouts out there. His coach agrees, too. “People are starting to realize his potential at 6-7, 6-8–whatever he measures at,” Massaroni said. “The skill–you don’t see at that size, where he can catch and face, play in the post, he has the ability to score the ball, defend, block shots. Again, it’s just a matter of time before people see his development, which is important for him as his recruitment goes forward.” Massaroni continued: “I want him to take it to another level now. He was here, now he’s got to raise it up a notch and that’s got to be the biggest thing he wants to do. I want to see how he can take it to another level and continue to progress as an individual and as a team player.” Photo: Via Andrew Slater / 247Sports.com Follow Eugene on Twitter Follow Adam Zagoria on Twitter And Like ZAGS on Facebook