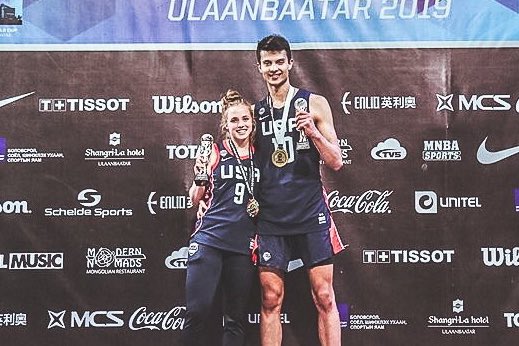 By ARI ROSENFELD CHARLOTTESVILLE, Va. — Dawson Garcia, the Class of 2020 forward from Prior Lake (MN) and D1 Minnesota, has had a successful start to the grassroots season, helping lead D1 Minnesota to an undefeated record in Adidas Gauntlet play and capturing a gold medal representing the USA at the FIBA 3×3 U18 World Cup in Mongolia. “ great, they brought us in for like a week just to get us prepared for all that, and we grew a tight bond, bought what the coach was saying, and then we also had fun with it,” Garcia said of the 3×3 experience in Mongolia. “So it was just a surreal moment when we won the gold medal.” strong play has come a boost in his recruitment as well, as Midwest schools begin to truly make the skilled 6-foot-9 forward a priority and a few blue start to enter the picture as well. hosted a bevy of schools for in-home visits in recent months, as his recruitment starts to really take shape. At NBPA Top 100 Camp in Charlottesville, he broke down a few of the schools who are heavily involved in his courtship. Minnesota- “I have a great relationship with [Coach] [Coach] Pitino especially. They came to my house and I’m gonna go on a couple here and go hang out with them a couple times, so it should be good.” Marquette– “It was a good experience, they were just saying basically that they’d bring me in and it would kind of be built around me, and I would kind of run the show and bring everyone in. When I went out there I built a great relationship with Wojo and Stan and all the staff, as well as the players since I got to hang out with them as well.” Indiana– “They came to my house when they could do the in-home visits, and they were just showing me film on how they would use me and I really saw myself playing in that style. It was cool to see all the success that guys like me have had there.” While Garcia will clearly be a priority from the regional powers listed above, he said he has also begun to hear from the likes of Kentucky, Duke, North Carolina, and Gonzaga lately, all of whom plan to evaluate him here at Top 100 Camp and also in the upcoming July evaluation periods, before potentially springing an offer. his level of interest in Kentucky, who he said is in contact “every couple weeks or so”, Garcia said: “My level of interest is high. It’s a great program, they get their guys to the league right away. Even when they came to my school and talked to me, they were like ‘Kentucky’s not for everybody,’ and that’s true. It shows that when you go to Kentucky you’ve got to love basketball or else it’s gonna be a living hell for you.” Garcia, who plans to make a decision in the fall, also said that geography will not play a part in his decision, which can only bode well for a blue blood’s chances of landing him should they decide to offer. “Geography doesn’t really affect me at all. I like the nice weather, but being from Minnesota, winter doesn’t bother me at all, four seasons doesn’t really affect me. Being far away from home or being close doesn’t really matter to me, just my relationship with the coaching staff and how comfortable I feel about that school.” Photo: @RyanJamesMN Follow Ari on Twitter Follow Adam Zagoria on Twitter And like ZAGS on Facebook