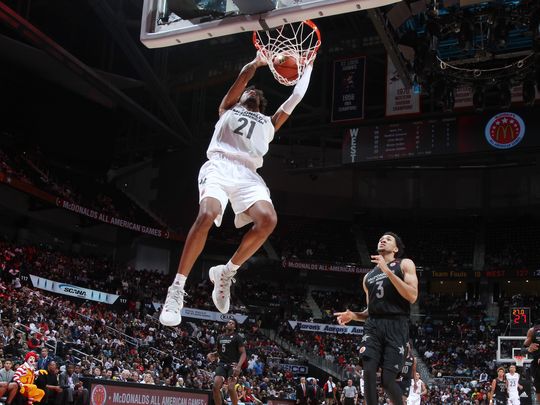 By ADAM ZAGORIA Jordan Brown, the 6-foot-11 former McDonald’s All-American power forward, committed to Arizona on Friday. Brown initially chose Nevada over Arizona and California. He will sit one year to play three, per NCAA regulations.

Brown averaged 3.0 points and 2.1 rebounds last season while playing on a loaded and experienced Nevada team. “Jordan is a skilled power forward who can move, has a high IQ, the ability to make shots, is a really good passer, can ball screen, and can rebound and will fit in very well in any offense that is predicated on ball screening, ball movement, and spacing,” Phillipe Doherty, program director at Prolific Prep, said when Brown first chose Nevada. “Jordan has a motor and can really move up and down the floor, and at 6-11.5, has the ability to finish at the rim. He has great touch and skill due to all the hours he has put in the gym with his father, Dion. He’s a very skilled power forward who is efficient and smart. Jordan is a high-character, intelligent, and relentless worker who will only get better and better with every practice and game.” Photo: USA Today Follow Adam Zagoria on Twitter And Like ZAGS on Facebook