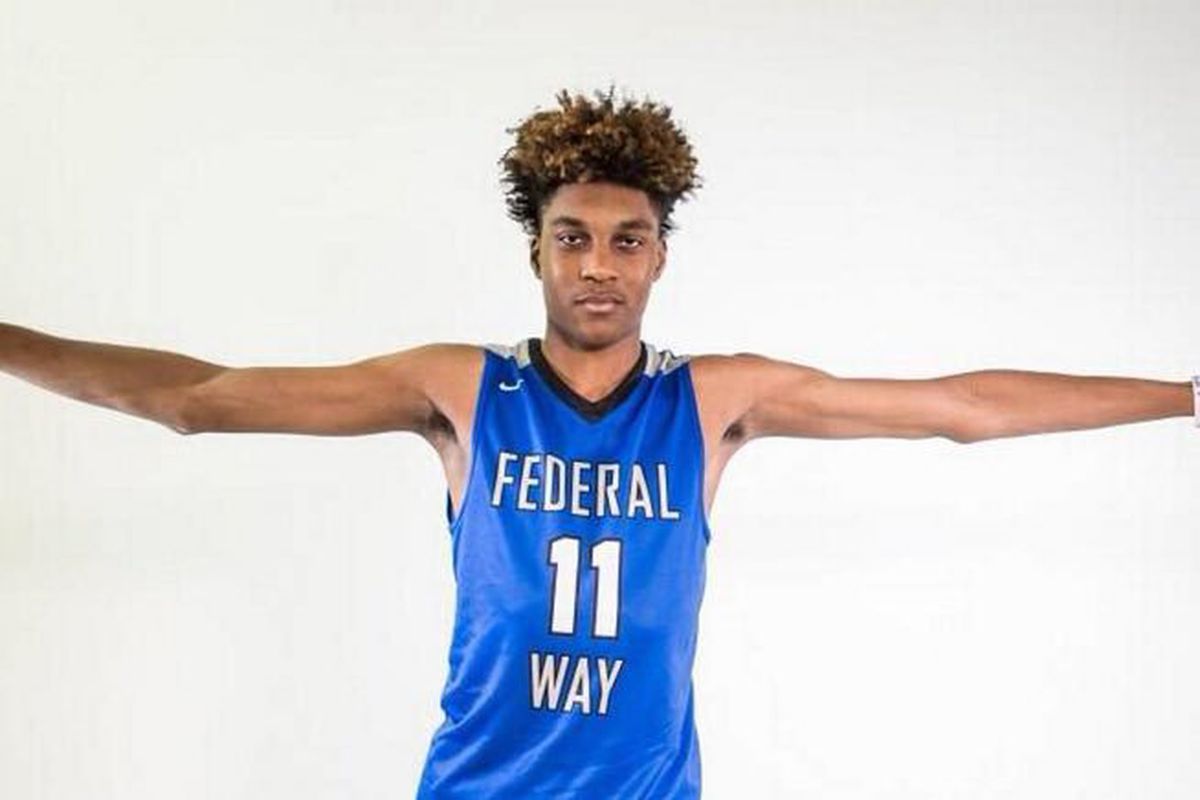 By ADAM ZAGORIA Jaden McDaniels, the 6-foot-10 small forward from Federal Way (WA), committed to Washington, as expected. He made the announcement at 10 p.m. West Coast time, 1 a.m. Wednesday on the East Coast. McDaniels chose Washington over Kentucky.

McDaniels calls to mind a young Kevin but said he’s also watched “a lot” of Kawhi Leonard. As for the comparisons to Durant, he said in in December, “It’s cool, but . Just being compared to an NBA player, not everybody has that opportunity.” Asked if it’s a fair comparison, he said, “I kind of think it is just because of how I am and how long he is, and we’re both versatile players.” “It’s unfair to compare him,” his trainer, Carteia French-Toney said. “He’s not Kevin Durant, he’s Jaden McDaniels, and he can only be the best version of himself.”

Jaden McDaniels with the Transition dunk in front of Cal and Kenny Payne. He definitely has a body type similar to KD. pic.twitter.com/8uWfYQELd6

He will join a strong recruiting class featuring RaeQuan Battle, Marcus Tsohonis and fellow five-star forward Isaiah Stewart. Stewart signed last month and gives Washington a potent inside presence. “We’re so happy to welcome Isaiah to the Husky family and ready to have him in purple and gold,” said head coach Mike Hopkins. “He is a dynamic player who has an unrelenting work ethic that fits exactly what we are trying to build here at Washington. He’s a differencemaker not only on the court but as a leader, a worker and a person. He’s going to be a great teammate and he’s a proven winner. We’re excited for him to join this class and know he is going to be a great representative for nation.” McDaniels is the projected No. 8 pick in the 2020 NBA Draft, per ESPN.com, while Stewart is No. 11. Washington now has two projected lottery picks in the frontcourt, and should draw a parade of NBA scouts in 2019-20.

The Huskies will also add five-star Kentucky transfer Quade Green, who has been with the team since January sitting out due to transfer rules. Meantime, Kentucky awaits the fate of several big men, including freshman E.J. Montgomery and sophomore Nick Richards, who are both testing the NBA Draft waters. Neither was invited to last week’s NBA G League Elite Camp or NBA Combine. Kentucky is also involved for Kerry Blackshear, the 6-10 Virginia Tech transfer who was invited to the Pro Basketball Combine May 21-22 in Thousand Oaks, Calif. Blackshear is looking to go pro and hence his interest in attending the Combine. Aside from Kentucky, Texas A&M and Virginia Tech are among those involved. Kentucky’s roster is loaded with guards and wings for 2019-20 including Ashton Hagans, Tyrese Maxey, Immanuel Quickley, Dontaie Allen, Keion Brooks, Kahlil Whitney Johnny Juzang. But the Wildcats still need some frontcourt fortification. Follow Adam Zagoria on Twitter And Like ZAGS on Facebook