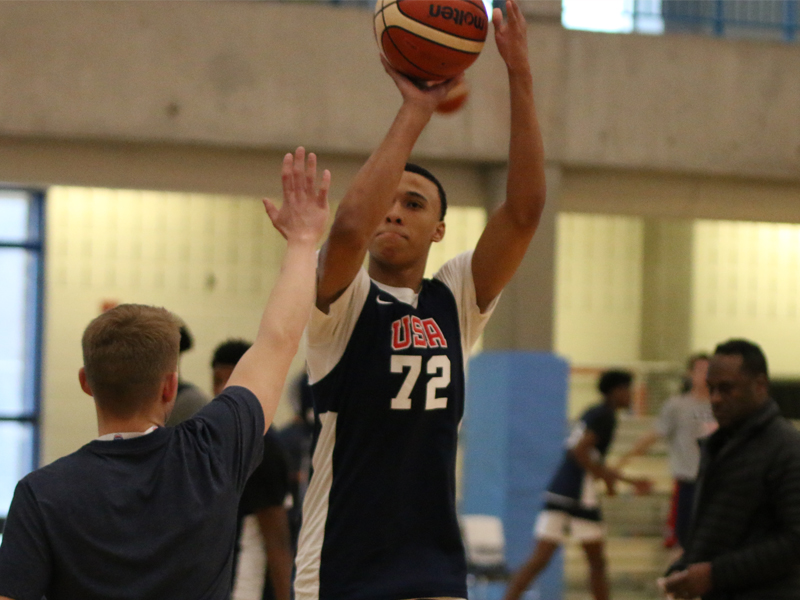 By JACOB POLACHECK R.J. Hampton, the 6-foot-5 combo guard from Little Elm (TX) High School, will reclassify to the 2019 class, his father Rod told 247Sports Tuesday. Hampton is now considering a final four of Kentucky, Kansas, Memphis and Texas Tech. Hampton has cut Duke from his list after Tre Jones announced his intentions to return to Duke for his sophomore year earlier this month. He added Texas Tech to his list. “It’s going to be Kentucky, Kansas, Memphis and we took off Duke and added Texas Tech,” the elder Hampton told 247Sports. “[Chris] Beard is one of the great minds and he what he’s done with less, and I’m thinking what can he do if he gets more,” he added. “Beard was the first to call him when they could call juniors at midnight.” Hampton has already taken official visits to Memphis (Sept. 13), Kentucky (Oct. 12) and Kansas (Dec. 14). He’s yet to schedule any new visits. In the first session of the Nike EYBL this past weekend in Georgia, Hampton averaged 28.8 points per game , which was good for second in the league.. “Just his play at USA and not from what everyone else said, but it was my feeling as his dad,” Hampton said. “His play at USA and this weekend [at EYBL], it was stellar. You got bonafide pros in that league. In 24 months, 36 months you have bonafide pros from 2020 to 2022.” “We talked about it before this weekend and then on the plane on the way back, and he said he didn’t have anything left for high school,” he added. Follow Jacob on Twitter Follow Adam Zagoria on Twitter And Like ZAGS on Facebook