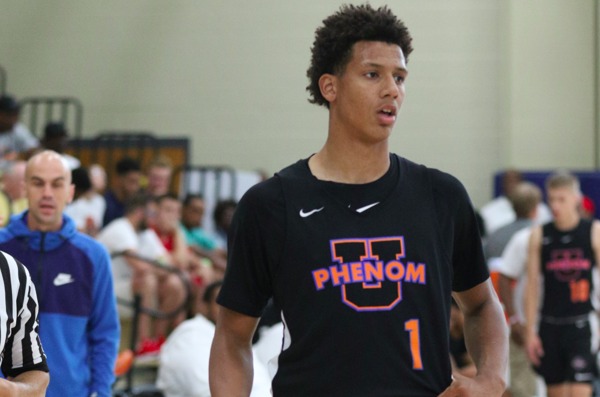 By ADAM ZAGORIA CARTERSVILLE, Ga. — Duke coach Mike Krzyzewski and Kentucky coach John Calipari headlined a Who’s Who of high-major coaches who watched Jalen Johnson and Patrick Baldwin Jr. on Saturday at the Nike EYBL stop here. There was a palpable buzz around the court for Team Phenom’s game against the PSA Cardinals. The court was encircled with coaches, and it was obvious to everyone that at least two future pros were on the court. When I asked one high-major Division 1 head coach where he thought Johnson would land, he smiled and said, “Wherever he wants.” Johnson, the 6-foot-9 small forward from Nicolet (WI) High School, finished with 16 points, 9 assists and 4 rebounds in the 81-64 win. The 6-10 Baldwin, a Class of 2021 prospect from Hamilton (WI), tallied 8 points and 3 rebounds.

Jalen Johnson on the breakaway dunk and looking like a pro in front of a Who’s Who of college coaches.

I asked one coach where the thinks Johnson’s going. ‘Wherever he wants,’ he said. pic.twitter.com/GgWQvAUO71 — Adam Zagoria (@AdamZagoria) April 27, 2019

After a win earlier Saturday over Drive Nation, Johnson said Kentucky was his “dream school.” “Yeah, I like Kentucky a lot,” he told reporters here. “That’s been my dream school growing up. Coach Cal, it’s meant a lot him coming to my school three times this year, so just to show that I’m a priority for them, they really want me, it means a lot.”

Jalen Johnson says Kentucky has been his dream school growing up. No. 3 player in the 2020 class. pic.twitter.com/EckbHlvVtO

Duke’s entire staff also visited Johnson on April 22, and they remain heavily in the mix as well.

Cam Mack lands at Nebraska after decommitting from St. John's