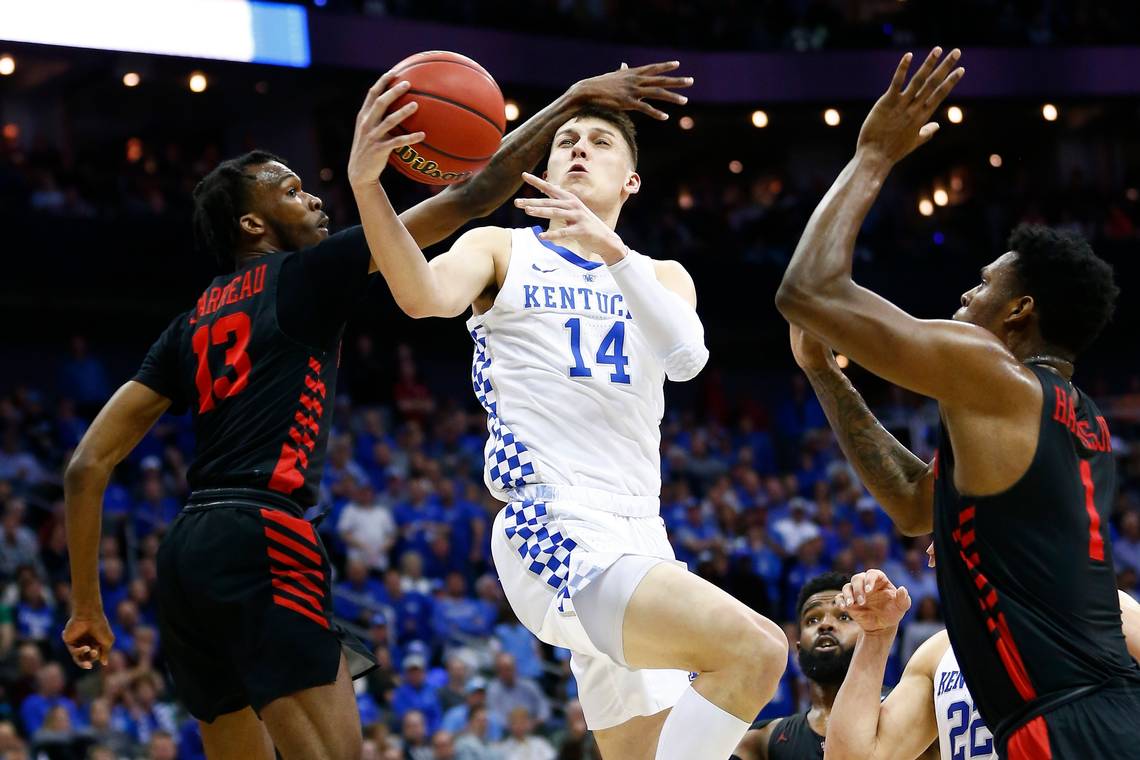 Kentucky announced that freshman guard Tyler Herro announced Friday plans to submit his name for the 2019 NBA Draft and hire an agent. Under new NCAA rules, Herro can sign with an NCAA-certified agent, receive feedback and still return to school.

He is currently projected as the No. 17 pick, per ESPN.com.

Herro will have until May 29 (10 days after the NBA Draft Combine) to make a final decision as to whether he wishes to remain in the draft or return to Kentucky.

“My freshman season at Kentucky was incredible,” Herro said. “As Coach Cal and the staff promised, it was the hardest thing I’ve ever done. This staff challenged me to be the best version of myself. I’m proud of what we accomplished as a team and how I elevated my game personally. After talking with my family, Coach Cal and the staff, I’ve decided to test the waters and see where I stand in the NBA Draft process.

“In order to make the most informed decision possible, but also leave my options open, I will be taking advantage of new rules allowing me to work with an agent. If the information I receive supports that I’m likely to be a high draft pick, I want to be upfront with everyone in Big Blue Nation that I will keep my name in the NBA Draft. If the evaluations tell me I need to elevate my game further, I would be thrilled to return to Kentucky and help this team compete for a championship.

“Whatever happens over the next couple months, I want to thank BBN for its support this season and throughout this process. I love this school, I love playing on the Kentucky stage and I am grateful that my family is now part of the Kentucky family.”

Herro is the third underclassman from the 2018-19 Wildcats to declare for the 2019 NBA Draft, which will be held June 20 at the Barclays Center in Brooklyn, New York. Sophomore forward PJ Washington announced he will be entering the NBA Draft and plans to remain in the draft, ending a decorated two-year career at Kentucky. Freshman guard Keldon Johnson has also declared for the draft but is keeping his options open to possibly return to UK.

Herro has not yet determined his final status and will utilize new NCAA rules that allow players to sign with NCAA-certified agents. As in years past, players can submit paperwork to receive evaluations from the NBA and participate – if invited – in the NBA Draft Combine.

“I think Tyler is making the best decision for him and his family and using the resources that the NCAA now allows. I’m in full support of Tyler’s decision,” UK head coach John Calipari said. “What I’m most proud of is how Tyler became not only an efficient offensive player but an efficient defensive player. He’s wired and driven like only a few others I’ve coached. I’ve had an absolute ball coaching him. Whatever he decides to do in the end, I will support.”