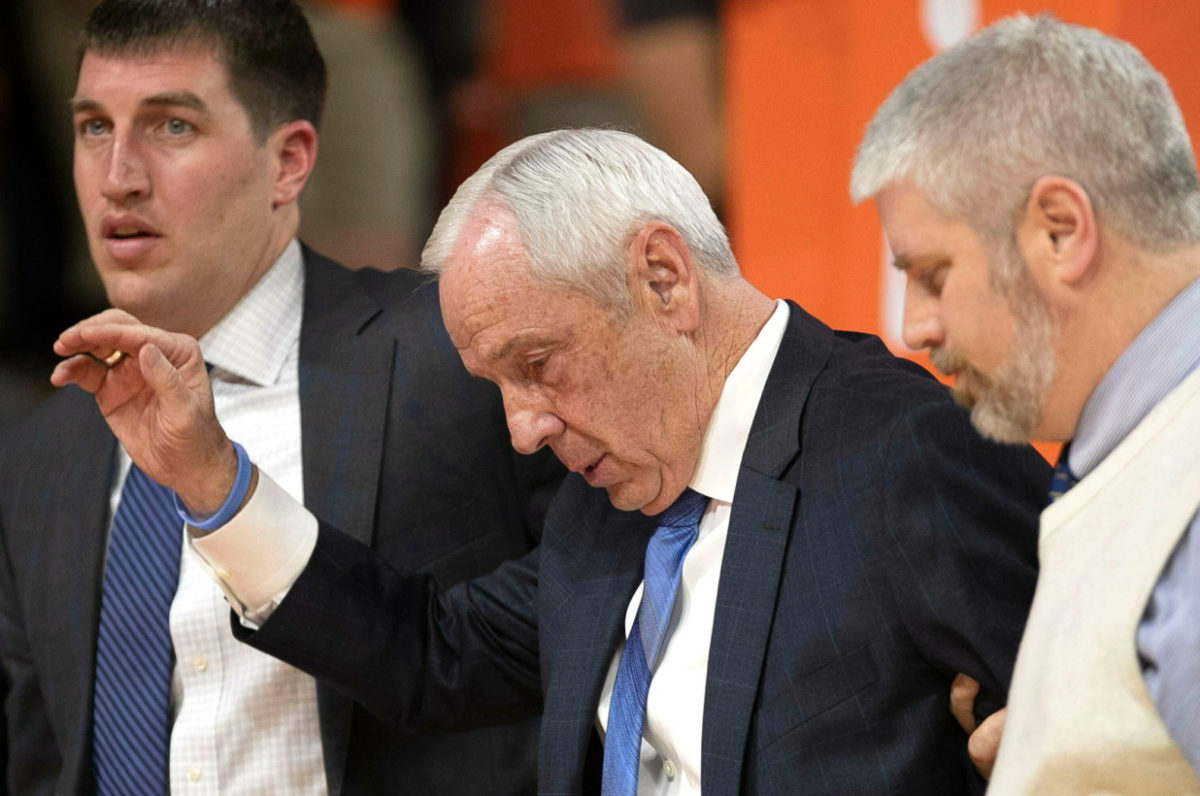 By PETE IACOBELLI CLEMSON, S.C. (AP) — After coach Roy Williams fell in front of North Carolina’s bench and had to be helped off, assistant Steve Robinson didn’t have much time to be concerned. Robinson and the Tar Heels had a game to finish. No. 5 North Carolina survived a wild finish without Williams, holding on to beat Clemson 81-79. Robinson, the former Florida State coach who spent the past 16 seasons with the Tar Heels, took about 30 seconds before he told his players that Williams would be OK and it was time to concentrate on basketball. “If I waffle, what do you thing those guys are going to do?” Robinson said. “They’re going to fall apart.”

Scary moment in UNC’s game as Roy Williams had to be helped off the court after dropping to one knee.

Instead, the Tar Heels hung tough. Coby White had 28 points behind six 3-pointers, and North Carolina (24-5) maintained a share of first place in the Atlantic Coast Conference, tied with No. 2 Virginia at 14-2 with a week left in the regular season. They also survived a tight finish, when the Tigers cut a seven-point lead to two. The outcome wasn’t certain until Shelton Mitchell lost the ball driving into two North Carolina defenders in the final seconds. Williams wasn’t there to see it. He sustained an episode of vertigo a minute before halftime, falling in front of his team’s bench and getting led into the locker room. He did not return for the final 20 minutes. After the game, Williams shook hands with Clemson coach Brad Brownell in the hallway. He was smiling and speaking to fans and friends, feeling better after his latest bout of what he called “benign positional vertigo.” He said he whipped his head around quickly to call for Seventh Woods to get in the game when the condition struck. Williams said he felt good enough that he planned to return to the bench with about four minutes left. “But we were up by seven,” he said smiling. “And I didn’t want to jinx it.” Turns out, the Tar Heels almost did that on their own — the 70-63 lead cut to two in the final seconds — before holding on for their fifth straight win and 12th in the past 13 games. Cameron Johnson had 19 points with six 3s of his own, and Luke Maye had 13 points and 10 rebounds. The Tigers (17-12, 7-9) closed to 80-79 on Mitchell’s foul shots with 10.3 seconds left. Brownell said he watched video of the final drive. “It was tough, it was tough,” he said. It was the fourth time this ACC season Clemson lost on the final play. Marquise Reed led Clemson with 24 points, and Elijah Thomas had 14 points and 11 rebounds. The Tigers played without starter David Skara, who had an upper body injury in a win at Pitt this past Wednesday night. Williams, 68, has had vertigo before in games, leaving a win over Boston College three years ago. Johnson said players were concerned when it happened but told at halftime Williams would be fine. “We had to trust our trainers were going to take care of” Williams, Johnson said. “We had to turn our attention to Coach Rob and try and get the win for him.” Photo: AP Follow Adam Zagoria on Twitter And Like ZAGS on Facebook