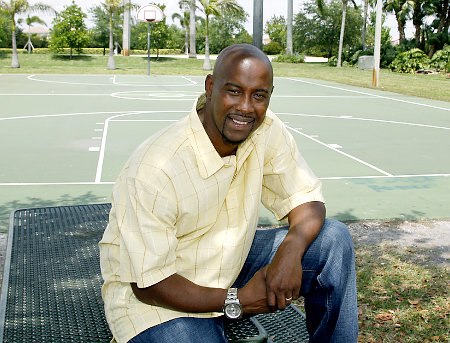 By ADAM ZAGORIA Legendary New York City basketball star Kenny Anderson is improving after suffering a stroke on Saturday, sources told ZAGSBLOG. The former Archbishop Molloy High School and Georgia Tech star suffered the stroke on Saturday night and was in intensive care until Monday night. He lost some vision in his right eye. Anderson suffers from high cholosterol and high blood pressure and was not taking any medication for the conditions, sources said. Sources said he’s alert and talking a little bit, and will head to a rehabilitation facility for seven days, possibly beginning Wednesday. His wife, Natasha, has been with him in the hospital. “We would like to thank everyone for reaching out on behalf of Kenny,” she told the Daily News. “Our family is extremely grateful for all the prayers and love that we have received over the last few days. We appreciate you continuing to respect our privacy as Kenny heals.”

I was told Kenny Anderson had the stroke on Saturday and will head into a rehab facility for 7 days beginning soon. https://t.co/gtTDvUtSr0

Kenny Anderson is doing better following stroke Saturday. His white spotted it early and got him to the hospital quickly. His speech and eyesight were affected but have improved.

All the best to the great Kenny Anderson. https://t.co/iuI2itQytV

Anderson, 48, was the No. 2 overall pick of the New Jersey Nets in 1991. He scored more than 10,000 NBA points and was an All-Star in 1994. He finished his pro career overseas in 2006. At Molloy, he was a four-time Parade All-American and New York’s Mr. Basketball in 1989. He led Molloy to two New York City Catholic league championships and scored 2,621 points, then a state record. In a 2017 documentary entitled “Mr. Chibbs,” he discussed how he had been sexually abused as a child by both a person who lived in his neighborhood and a basketball coach. He revealed the news to the New York Post in 2013. After being fired for a DUI arrest while coaching at the David Posnack Jewish Day School in 2013, Anderson was later hired as the head coach at NAIA school Fisk University last September. “The film, it’s painful but it’s true. It’s honest,” Anderson told the Daily News. Follow Adam Zagoria on Twitter And like ZAGS on Facebook

Karl-Anthony Towns, saying he had a '5 percent chance' to survive, has monster game in return to Timberwolves