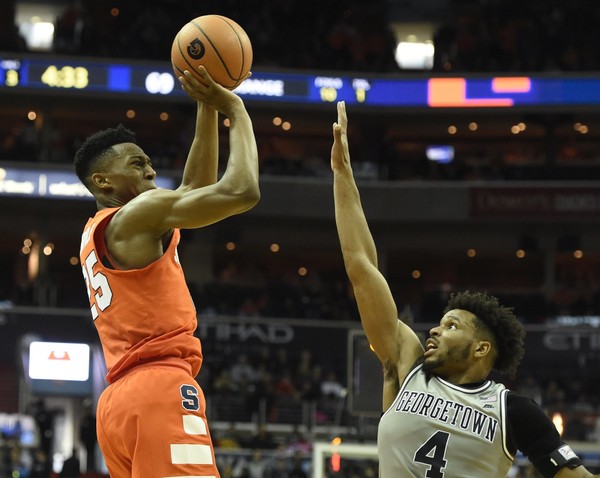 SYRACUSE, N.Y. (AP) — Tyus Battle scored 21 of his game-high 26 points in the second half, including the game winner with three seconds to go, and Syracuse overcame a 15-point deficit to defeat its longtime rival Georgetown 72-71 on Saturday. Battle and the Orange were woeful in the first half. Battle was just 1 of 8 and the Orange were just 7-of-27 shooting, but Battle and Syracuse (7-2) came out with a vengeance in the final 20 minutes to overtake the Hoyas (7-2) and capture their fifth-straight victory.

Tyus Battle puts Syracuse up 72-71 and now has 26 pic.twitter.com/0KaAq8pqZg

Elijah Hughes had 15 points and Oshae Brissett added 12 for the Orange.
Jessie Govan led the Hoyas with 22 points. Mac McClung had 18 and Greg Malinowksi chipped in with 11.

Tyus Battle to the doubters from the NBA and the ACC: pic.twitter.com/wnfKSMkbXn

A 3 by Govan gave the Hoyas a 71-70 lead with just over a minute remaining. Marek Dolezaj drew a charge on Georgetown’s Jagan Mosely with 10 seconds to go, giving Battle the opportunity. Georgetown took its largest lead of the game, 37-22, on a jumper by Trey Mourning when Syracuse stormed back on a 14-2 run. Battle scored 10 during the surge to bring the Orange to within three at 39-36. The Orange closed to 47-48 on a short jumper by Battle with 11:51 left. The Orange took its first lead since a 5-3 margin, 50-48, on a 3 by Hughes and extended it to a six-point advantage on a floater by Brissett. Two consecutive 3s by Hughes kept the margin at six with under seven minutes to go. Malinowski’s third straight 3 brought the Hoyas to 60-59, and a free throw by Josh LeBlanc tied the score at 60. A 3 by Jahvon Blair and two free throws by Malinowski gave the Hoyas a 65-62 cushion with 4:50 remaining. After a free throw by LeBlanc gave the Hoyas a 66-64 lead, Jalen Carey hit a desperation 3 with 2:35 left to give Syracuse a 67-66 lead. Govan’s jumper made it 68-67 Hoyas, but a 3 by Battle gave Syracuse a 70-68 edge with 1:28 to go. McClung scored 13 points and Govan added nine, leading the Hoyas to a 35-22 halftime lead. Syracuse took an early 5-3 lead when the Hoyas went on an 8-0 run to take control. Syracuse, which went more than six minutes without scoring, got no closer than five points the rest of the half. The Orange’s output represented the second-fewest points scored by Syracuse in a half in the Carrier Dome’s 38-year history. Syracuse started the game shooting just 4 of 22 and ended the half 7 of 28 and a meager 1-of-14 shooting from 3. Battle, Brissett and Hughes, Syracuse’s leading scorers, were a combined 3 of 18 for 14 points. The Hoyas also dominated on the boards, outrebounding the Orange 28-19. BIG PICTURE: Georgetown: This one will sting for a long time. The Hoyas seemed firmly in control but let this one slip away. They’ll have one week to get shrug it off. Syracuse: The Orange will need to play with the intensity they displayed in the second half. Jalen Carey gave Syracuse a much-needed spark off the bench subbing for the foul-plagued Frank Howard. UP NEXT: Georgetown hosts Southern Methodist on Saturday. Syracuse’s string of seven straight home games continues Saturday against Old Dominion.
Photo: Syracuse.com
Follow Adam Zagoria on Twitter And like ZAGS on Facebook