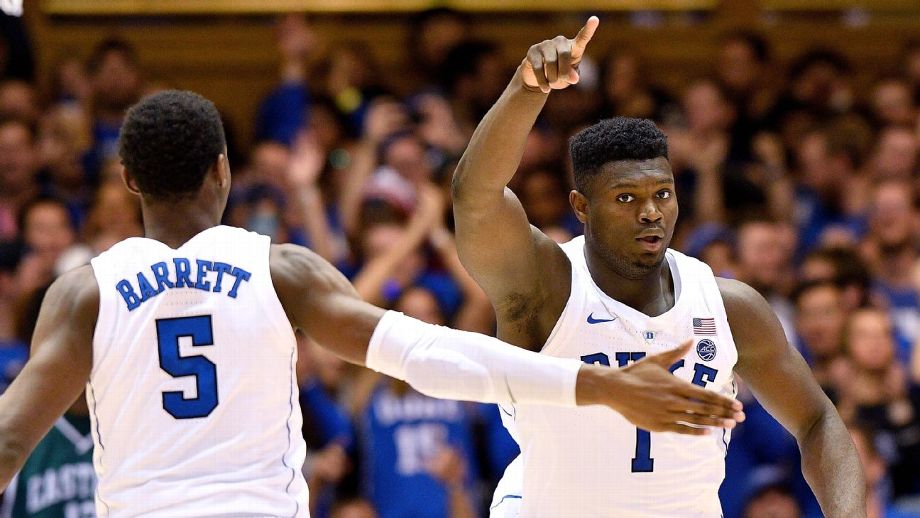 By ADAM ZAGORIA The Big Ten/ACC Challenge will feature three matchups between Top 25 teams, but the most anticipated game no doubt features unranked Indiana at No. 3 Duke on Tuesday night (9:30, ESPN). Nearly 30 NBA scouts are credentialed — 27 to be exact — at Cameron Indoor Stadium for a game that features four projected Top 10 picks in Indiana’s Romeo Langford and the Duke trio of Zion Williamson, R.J. Barrett and Cam Reddish. Per the latest ESPN mock, they are four of the top six projected picks in 2019 with Williamson at No. 1, Barrett at 2, Reddish at 4 and Langford at 6.

The top two are Canadians and 3 of the 5 will be in tonight’s Indiana – Duke game pic.twitter.com/eLwrX9aRhf

Williamson, Barrett and Langford were teammates in the McDonald’s All-American Game last March. “I played with him at the McDonald’s All-American Game,” Barrett, who scored 26 points in a 131-128 loss, said Monday of Langford. “He’s a very good scorer and a very good player. He can read, he can shoot, and he does a lot of good things. We’re going to play a hard game, a lot harder than we did last game.” Langford enters averaging 18.5 points and 5.8 rebounds for an Indiana team that is 5-1 and has won two straight. They figure to face a fired-up Duke team that is coming off a loss to Gonzaga last Wednesday in the Maui Invitational final, a loss that cost Duke the No. 1 ranking and propelled the Zags to the top spot.
“We learned that we have to play hard every game from the beginning of the game,” Barrett said. “We can’t just ease our way into it, because against a good team like Gonzaga, that’s what’s going to happen to us. I feel like Tre (Jones) is the one that started the comeback. At the end of the day, the good thing is that we still have fight, and we’re going to keep fighting all of the time. That was the good thing to take from that game.” Barrett was criticized for playing hero ball down the stretch of the Gonzaga game, and it will be interesting to see if he looks to get his teammates more involved in this one, especially if it’s close down the stretch.
“It’s about getting back to playing the way we play,” Barrett said. “We didn’t have as many assists as we did to start the season out, so we’ve just got to get back to playing the way we play.” Photo: Grant Halverson/Getty Images Follow Adam Zagoria on Twitter And Like ZAGS on Facebook

Gonzaga leapfrogs Kansas for No. 1 in men’s AP Top 25 after knocking off Duke, which falls to No. 3