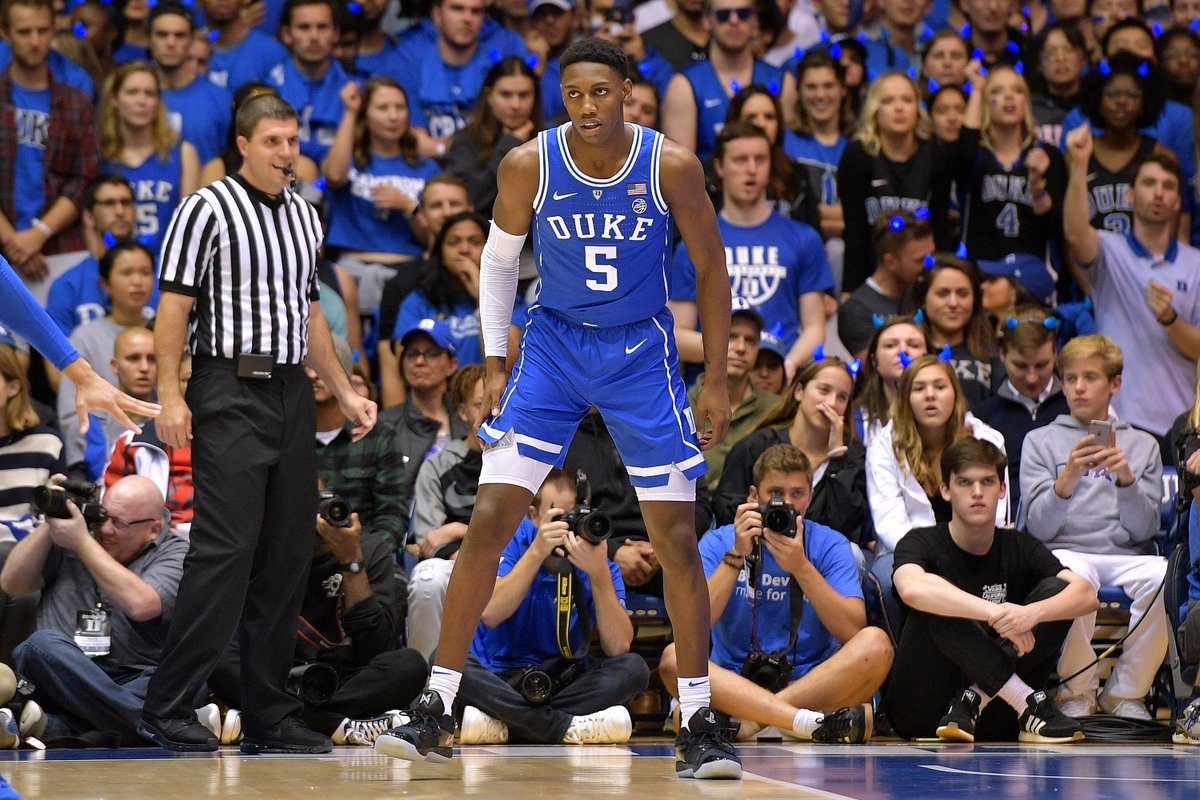 By ADAM ZAGORIA INDIANAPOLIS — The Knicks appear headed straight for the NBA Draft lottery (again) and so team President Steve Mills and GM Scott Perry were among the NBA personnel at the Champions Classic on Tuesday night. Mills and Perry were among the execs likely drooling over Duke’s R.J. Barrett and Zion Williamson, who combined to score 51 points in a 118-84 obliteration of Kentucky. The 6-foot-7 Barrett has long been projected as the No. 1 pick in 2019, while ESPN.com currently has the 6-7 Williamson at No. 3. Barrett went for 33 points, 6 assists and 4 rebounds in the Kentucky game, and the Wildcats had no answer for him in transition and on drives to the bucket. “[Barrett] will end up being the best player in this draft,” one NBA scout told me for FloHoops.com. “Versatile. Can score in three different ways. He can make the three-pointer. He can get to the basket. He can shoot the mid-range. He’s got great positional size. Most dangerous in the open floor. If he were to come out, I think he’s the best all-around talent this year.” Despite weighing in at 285 pounds, Williamson is a “graceful” athlete, according to Duke coach Mike Krzyzewski.  He has drawn lofty comparisons to LeBron James because of his bullish size and freakish athleticism. He also showed a nice shooting touch, something that had been a criticism. Williamson also showed defensive intensity, blocking big man Nick Richards on one end in a sequence that led to a Barrett bucket.

Zion Williamson is Thanos in real life ? (via @BBallSociety_) pic.twitter.com/pf9HtEFPFy

“Powerful, athletic,” the NBA scout said. “I would just say based on [Tuesday] night, that’s the hardest I’ve seen him play on both ends of the floor. He’s got a quick first step and he’s just powerful. He’s too powerful for these college guys. I don’t know how any college team is going to guard him one-on-one.” Per DraftExpress.com, the Knicks are currently projected to pick seventh and take Kentucky wing Keldon Johnson, who is considered a lottery pick but was not nearly as impressive as Barrett or Williamson. “Good athlete,” the scout said. “A little bit of a disappointment in the sense that his lack of maturity showed up [Tuesday] night. Seemed to kind of quit at the end of the game, wasn’t going his way. He’s a driver, he’s got to become a more consistent perimeter jump-shooter. I know he made the first three, but his other misses weren’t good at all.” As the Knicks continue to feature young players like Kevin Knox, Allonzo Trier and Mitchell Robinson, they are expected to lose a lot of games along the way, which should ultimately help them land a top draft pick. Per Tankathon.com, the Knicks (3-8) currently have a 45.1 percent chance at a top-4 pick and an 11.5 percent chance at the No. 1 overall pick.
Follow Adam Zagoria on Twitter
And Like ZAGS on Facebook

Duke's 'Big Three' humble Kentucky at Champions Classic; Are the Blue Devils the new No. 1?