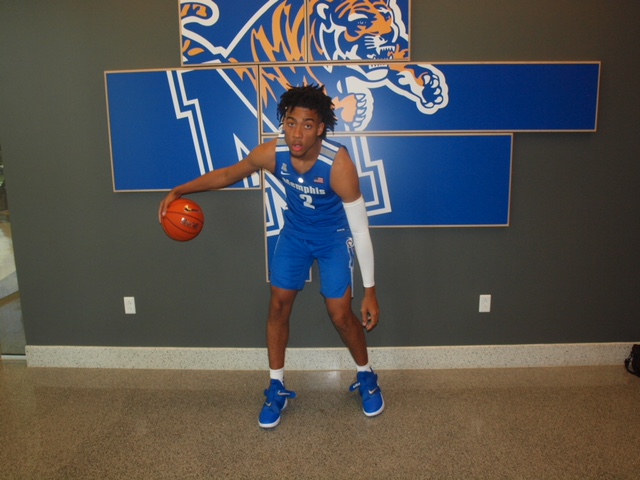 By ADAM ZAGORIA Trendon Watford, the 6-foot-9 multi-positional forward from Mountain Brook (AL) High School, took an official visit to Memphis this past weekend, the first of several he has planned in the coming months. “This was my second time on campus with the new staff and just being able to see them practice and seeing the Memphis Madness, it was pretty much a great visit,” Watford said Monday by phone. James Wiseman, the No. 1 prospect in the Class of 2019, was also at the Midnight Madness event before going to the USA Basketball minicamp that began Friday in Colorado Springs, Colo. Boogie Ellis and Jahmius Ramsey were also at Memphis on officials, while Precious Achiuwa and DJ Jeffries were there on unofficials. Asked if he talked to them about playing together, Watford said, “Me and James, we definitely talked about it. We played together in July [in AAU], so me, him and Boogie have talked about it.” Wiseman is also considering Kentucky, Kansas, Vanderbilt and Florida State, while Ellis has visited Georgia Tech, Oregon and Arizona ahead of his North Carolina visit this weekend. “I feel we [Wiseman and Watford] could be pretty good [together],” Watford said. “As versatile as I am, I feel I can just be an assist-type guy to him sometimes, and we could just play off each other. I feel like we can create mismatches on both ends of the floor.” As for what role he will play in college, Watford said, “They won’t try to box me in at a position, and they think I’m versatile. Coach [Penny] Hardaway feels like we play alike in some ways, and he can take my game to another level.” Asked if he believes Memphis can land five-star recruits going forward, Watford didn’t hesitate. “Oh yeah, you can already tell just by the guys they’re recruiting, a lot of guys have their eyes opened to what they have to offer,” he said. “Just being a lot of top guys talking about it, I really think they’re going to get it going soon.” Watford will next visit LSU (Nov. 3) and also plans to visit Indiana, Florida State and Alabama. He said dates aren’t finalized but he plans to visit Indiana for the Louisville game on Dec. 8, and Alabama for the Kentucky game Jan. 5. “I know the Alabama official visit is when they play Kentucky,” he said. “I’m not sure when the Florida State one is, but I’m pretty sure I’m taking one.” Watford is also considering TCU and Vanderbilt, he said, but plans to cut his list at some time. “I’ll probably cut it down after I take two more officials,” he said. “Just see how that goes and then I’ll probably cut it down again probably in like December or January.” He hopes to decide sometime in early 2019. “I’ll probably decide, if not March, then probably February, end of season, like that,” he said. “So I won’t be having to deal with during my whole high school season.”   Follow Adam Zagoria on Twitter And Like ZAGS on Facebook