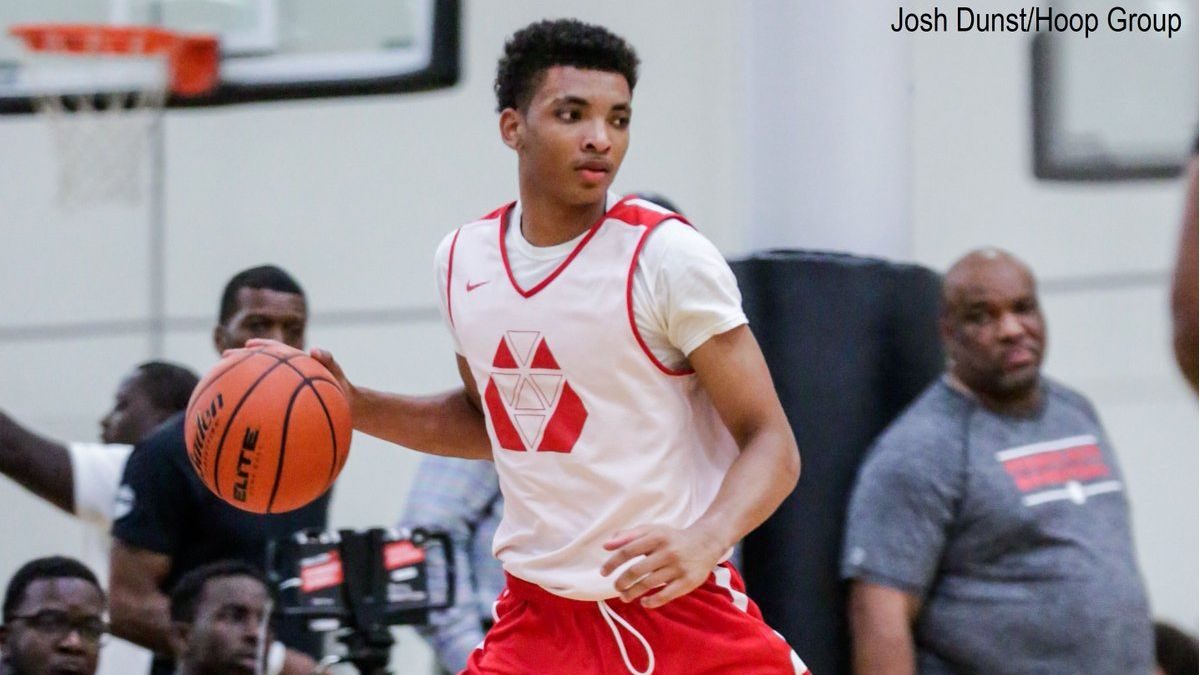 By ADAM ZAGORIA James Bouknight, the 6-foot-5, 185-pound shooting guard from the MacDuffie School (MA) and the PSA Cardinals, committed to UConn on Tuesday following his official visit this past weekend. It is his 18th birthday. Bouknight, who returned just before Peach Jam from a torn meniscus suffered in January, also visited Miami and Virginia Tech. Coach Dan Hurley and company have made Bouknight a priority recruit, watching him at MacDuffie last week before the visit. “[Their message is] to come in and have huge role,” Bouknight told ZAGSBLOG. “They want me to come in and be an impact player right away. Play lots of minutes and help UConn get back to where it needs to be.”

He told ESPN: “I had already built a relationship with [assistant] Coach Kimani [Young] when he was at Minnesota and that continued when he came to UConn with Coach Hurley. He stayed in touch with me throughout my injury process and that meant a lot to me and my family. We trusted him. “Then when I got a chance to build a relationship with Coach Hurley, his track record and pedigree as a coach, along with UConn’s winning tradition and history of putting guys in the NBA, it was all I wanted in my college choice.” After returning from injury and then dropping 33 points at Summer Jam Fest, he really helped his recruitment. “Yeah, I think I had a great end of the summer,” he said recently. “When I started to play coming back from the injury, the expectations for me weren’t as high as I thought they should be. So me coming in an putting up big numbers and scoring the ball a lot, I think that was a big plus for me.” Hurley and UConn remain in the mix for a number of elite prospects including guards Al-Amir Dawes and Jalen Gaffney, wings Precious Achiuwa and Tre Mitchell and big men Kofi Cockburn and Akok Akok. “When we look back at this 2019 class in a few years, you will not find more than two better shooting guards than James,” PSA Cardinals director Terrance ‘Munch’ Williams said. “He’s one of the most complete offensive players in the country and has learned to enjoy defending his position. It’s safe to say, James has star written all over him. I’m comfortable saying he has a great chance to play basketball in the NBA one day and it shouldn’t take him too long to join his fellow PSA Cardinals alumni on that platform.” Said MacDuffie coach Jacque Rivera: “We are extremely excited for James and the entire Bouknight family. Here is a young man who a year ago didn’t have a scholarship offer. He worked his tail off and listened to the adults around him and now he is reaping the rewards of his labor. We couldn’t be prouder of him.” Follow Adam Zagoria on Twitter And like ZAGS on Facebook