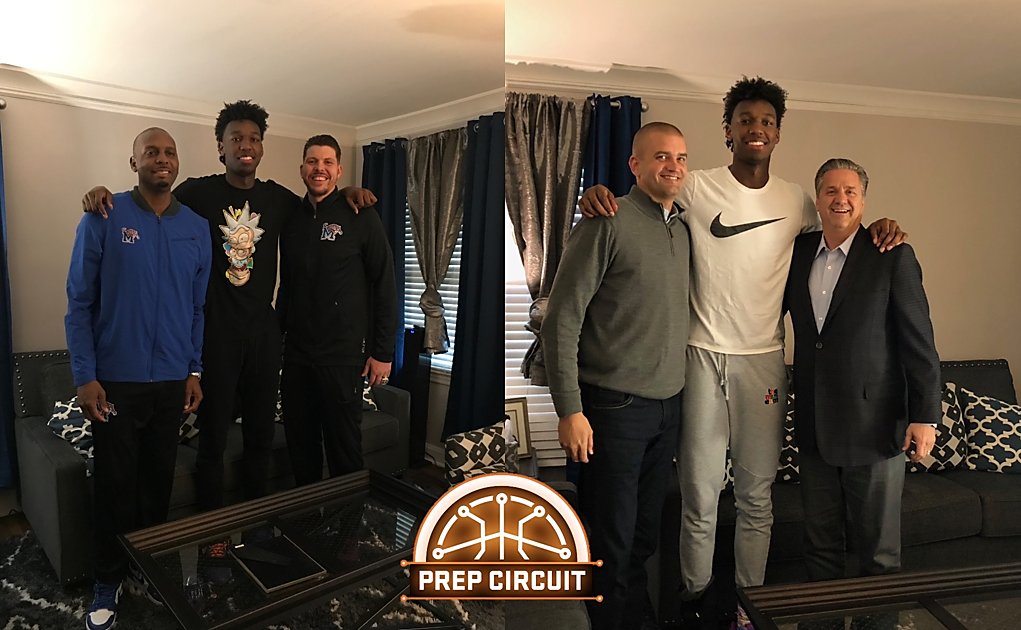 James Wiseman, the 6-foot-11 center from East (TN) High School and consensus No. 1 player in 2019, has updated his visit schedule, according to a report from 247Sports.com. Wiseman has now set official visits to Kentucky (Sept. 7), Kansas (Sept. 28), Vanderbilt (Oct. 14) and Florida State (Oct. 25). His mother, Donzaleigh Artis, previously told 247Sports her son is “wide open” and will wait until the spring to decide. “We have our options wide open,” she said. “Kansas keeps in touch all the time, Vanderbilt is always on him, Florida State is emailing and texting, they’re on him. It’s not just Kentucky and Memphis.” As for deciding in the spring, she added: “I want him to evaluate each school with what’s happening. I want him to figure it out because you have transfer students when basketball starts, you got people going to enter the Draft, coaches going to change so we’re going to do this at a late period, the latest period you can so he can see both sides of it.” Wiseman previously broke down his list for Prep Circuit: Arizona: “They did have DeAndre Ayton, who ended up being the number one pick in the draft. When you look at this past season they played through DeAndre Ayton by playing inside and out. I really like their program a lot because of how they play. Coach [Sean] Miller is a great coach and I have a feeling that I’d fit into their system well. Arizona is a great school.” Florida State: “Coach Stan Jones talks to me a lot. At the end of my junior year, he called me and said he was very impressed with my game and really wanted to recruit me hard. He said he came in late to recruit me because he didn’t think he had a chance, but if I do go to Florida State he said I can change their program and be the face of it.” Kansas: “Kansas is a great school and they have a winning tradition. Coach Bill Self is a great coach and they play inside and out by doing a lot of pick and rolls and have great guard play. They have done a great job there and they play the way I like to, which is intriguing.” Kentucky: “Coach [John] Calipari helps a lot of NBA players that have went through their program. Anthony Davis is my favorite NBA player and he went there. Then you have DeMarcus Cousins and a lot more great players who play in the league today. I think Coach Calipari has great connections such as getting his players to the NBA. I have a very strong relationship with Coach Calipari.” Memphis: “First of all Coach [Penny] Hardaway is one of my favorite mentors and one of my favorite coaches ever. He’s such a great coach and has taught me a lot when he was my high school coach. I have a feeling that if I were to go to Memphis that I would be the face of the program, but at the same time I would be able to recruit other players from this area and help make a great team.” North Carolina: “North Carolina plays inside and out as they have had a lot of great big men that have come through their program. They have a great atmosphere up there and Coach Roy Williams is a legendary coach. It would be an honor just to play under him.  They have a great winning tradition so they are a great program as well.” Texas: “Texas is a great school. You have Coach Shaka Smart, he’s a great coach and me and him talk a lot. They had Mo Bamba come through there. He was a rim protector and they played a lot of pick and pop through him. I like blocking shots and being around the basket so I have a feeling if I were to go there I could do the same things he did.” Vanderbilt: “I’m from Nashville, Tennessee so that’s my hometown school. A big reason why they made my list cut is because I’m originally from Nashville. Vanderbilt is a great program and they got Darius Garland to go there who is a good friend of mine. I think I fit in well with them just by talking to their coaches. They have a great coaching staff and I have a great relationship with them.” Follow Jacob on Twitter Follow Adam Zagoria on Twitter And Like ZAGS on Facebook