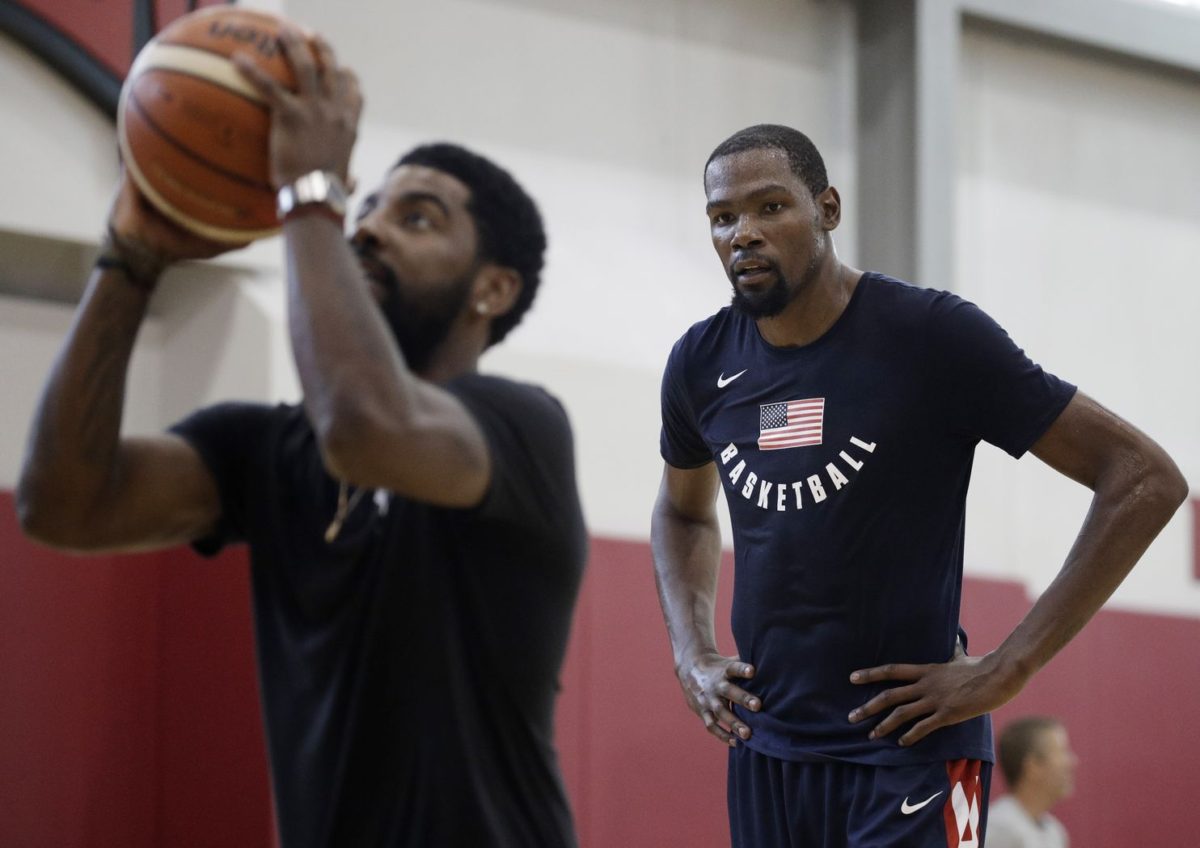 LAS VEGAS — Kyrie Irving isn’t in a position where he could play with USA Basketball this week at its minicamp.

He made the trip to Las Vegas anyway.

The way Irving sees it, if USA Basketball calls, you answer. So he was in the gym Thursday for the start of the two-day camp, watching and interacting with guys but not partaking in the on-court action.

Kyrie Irving Injury Update and his take on whether Boston can challenge Golden State — https://t.co/MYB9Obebsa

And he insisted that when the Boston Celtics start training camp in about two months, he will be fully ready to go.

“Easily. Easily. Easily,” the former Elizabeth (N.J.) St. Patrick’s star said. “It’s just the summertime. This is probably one of the first summers in my last seven years where I’ve actually had time to kind of develop and work on things that I want to improve on.”

Irving’s first season with the Celtics ended in mid-March with a knee issue that required surgery. The Celtics went to the Eastern Conference finals even without him and Gordon Hayward (who missed all but the first five minutes of the season because of injury) anyway.

And with LeBron James now out of the East — he signed with the Los Angeles Lakers, meaning his eight-year run of being on the team that wins the East is ending — Boston figures to be a popular pick to reach the NBA Finals next season.

“At the end of the day, we’re going to be battling anyway,” Irving said. “We haven’t started. Everyone’s 0-0 right now. The expectations, the power rankings, all that other good stuff that the media loves doing, it’s all part of the game. Obviously there’s some expectations that we have to meet individually and then as a group.”

Irving was the third-leading scorer for the U.S. at the 2016 Rio de Janeiro Olympics, starting all eight games and averaging 11.4 points. The U.S. went 8-0 in Rio on the way to gold.

Predictably, that didn’t go over well with Durant, who lashed back.

But when asked about the saga at USA Basketball’s minicamp Thursday, Durant didn’t shed a lot of new light on the topic.

“What happened?” Durant asked, incredulously, when a reporter asked him for his side of the story.

Durant seemed to take exception with the notion that he was the upset person in the tale.

“So I’m the upset one because he responded to something I said. … So how am I upset?” Durant asked.

After about a minute, the conversation moved on to basketball and Durant no longer seemed upset.

BASKETBALL ACUMEN: The sheer amount of basketball IQ inside the practice facility at UNLV on Thursday was impressive.

Besides U.S. coach Gregg Popovich and his coaching staff that includes Villanova coach Jay Wright and Gonzaga coach Mark Few among others, there were plenty of other proven basketball minds watching practice.

RESPECT FACTOR: Replacing a successful coach can be daunting, especially when someone is trying to replace Mike Krzyzewski.

Of course, replacing a winner with a winner tends to make things easier.

Gregg Popovich won’t have to spend any time earning the respect of his USA Basketball team. His five NBA championships with the San Antonio Spurs are obviously more than enough proof that he knows what he’s doing, and Blake Griffin — who played for the U.S. under Krzyzewski and now is back to play under Popovich — said the transition between coaches will be easy for the Americans.

“You’re talking about two of the most respected coaches in all of basketball and probably two of the best coaches of all time,” the Detroit Pistons forward said Thursday. “When you have the respect factor there, from the players, it doesn’t matter the styles you just buy into what they say. That’s what’s great about these two guys.”

PRACTICE ADJUSTMENT: Gregg Popovich planned for Thursday to be a relatively easy day. His players had other ideas, so Day 1 of USA Basketball’s minicamp in Las Vegas was more competitive than first envisioned.

Popovich was fine with that.

THOMAS MARVELS: Isaiah Thomas of the Denver Nuggets said he thought the atmosphere at minicamp Thursday was like an NBA All-Star Game.

“It’s just dope to be around such great players,” Thomas said.

He said he wasn’t surprised that players took Day 1 seriously, either.

“Everybody’s having fun, but at the same time everybody’s competing,” Thomas said. “You want to get better while you’re here, you don’t want to waste your time. It’s always good to be around the top players in the world, the top coaches in the world and just have a few days to get that fellowship in and just have fun.”