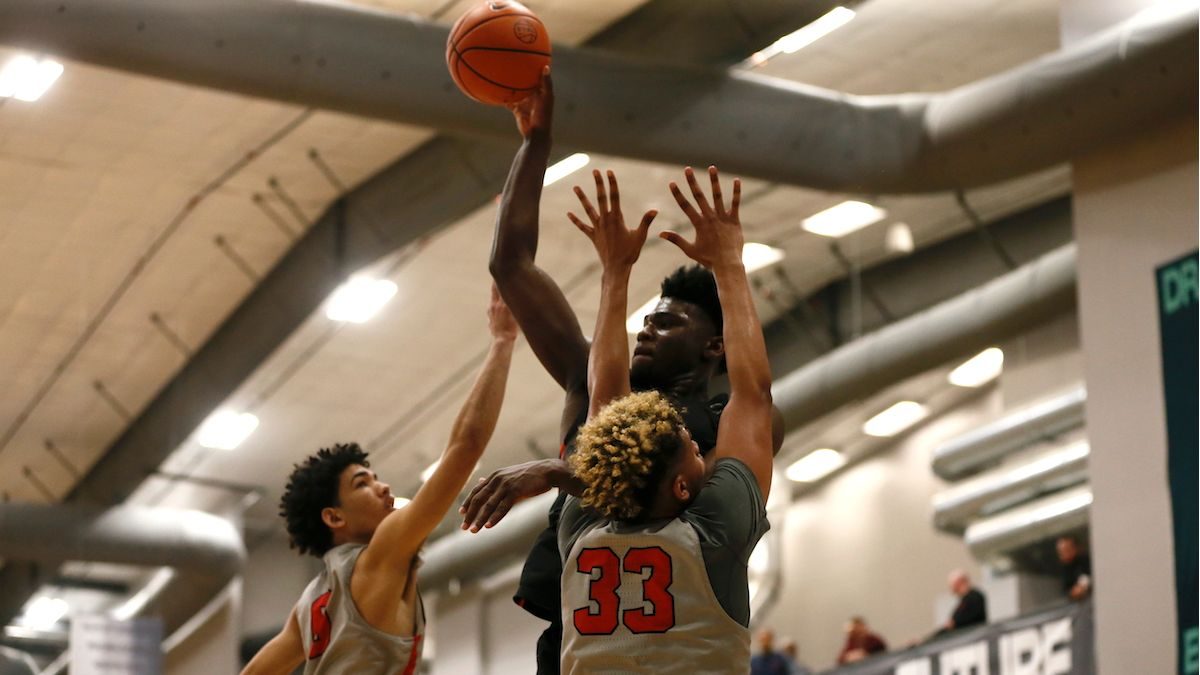 By ADAM ZAGORIA NORTH AUGUSTA, S.C. — Isaiah Stewart has had an eventful few weeks. He has just returned from Argentina where he won a gold medal with the USA U17 team in the FIBA U17 World Championship. Like several of his U17 teammates, including Vernon Carey Jr., Scottie Barnes, Wendell Moore and Jeremy Roach, Stewart also flew directly to Peach Jam from Argentina. “We definitely played great and took the medal back home,” Stewart said. After Peach Jam, Stewart, one of the most sought after big man in the Class of 2019, plans to cut his list to five schools from 10. “Hopefully get it down to five and schedule my visits and get it done by then,” the 6-foot-9 forward from La Lumiere (IN) said Thursday at the Peach Jam where he’s playing with the Albany City Rocks. “I’m waiting for Peach Jam to be over, I’m focusing on this. Hopefully after that I’ll start focusing more on cutting my five down.”

Stewart recently trimmed his list to 10 schools: Georgetown, Syracuse, Notre Dame, Villanova, Duke, Michigan State, Indiana, Texas, Louisville and Washington. Cutting the list further “will definitely be hard because it’s taking the next step,” he said. “It was hard for me to do it at 10, and then now I gotta cut five schools out that I have good relationships with so it’s definitely not an easy thing to do.” As for how he’ll make the cuts, he said, “I’ll start to look more at rosters, who they have coming in. Do I feel I can play with them? Are they good guys? The school, the fit, so I really look at things like that.” It’s also possible he could add to his list. Kentucky has not yet offered but could be in the mix if they do. “I’m not sure if an offer’s going to come from Kentuckyi or not, but I keep hearing their name jump in the mix, talking to my coaches about me so I’m not sure,” he said. “I would definitely start to look into that [ if they offer] but right now I’m just focused on the schools on my list.”

Jim Boeheim giving me the wave as he watches @Dreamville_33 and Joe Girard.

In Argentina, Stewart saw coaches from Texas, Georgetown, Duke, Syracuse, Michigan State, Washington and Villanova, among others. “Here so far, I’m starting to see the same faces,” he said. “Louisville popped up. Almost all 10 schools are making me a priority.” He visited Indiana, Notre Dame and Michigan State prior to the Argentina trip and recapped them here. In Argentina, Stewart also played alongside fellow big man Carey, who is considering Duke, Kentucky, Miami, North Carolina and Michigan State. “It was good [playing with him],” Stewart said. “We both can do so many things and he’s a very easy player to play with. There were some spurts where we were in the game together and dominated and found each other and did our thing.” Could they play together in college? “We both know we can play with each other but we haven’t really talked about that,” he said. Carey broke down several schools as well: Louisville: “They’ve been recruiting me since they were at Xavier so still talking to coach [Luke] Murray and coach [Chris] Mack and just building off of that. I could make an immediate impact and help the program and develop my game.” He added: “I knew Coach Mack since all the way back to Xavier and I’ve been talking to him for a couple of years.” Duke: “Coach K definitely been calling me and my family a lot more, and [assistant Jon] Scheyer as well, too. Coach K really thinks I’m a Duke kid, I have Duke traits. He really feels I can come in and be a leader. He also says he gets a feeling from certain groups, and he has that feeling with me and he feels I can do great things. “It’s definitely great, especially hearing that from Coach K.” Follow Adam Zagoria on Twitter And like ZAGS on Facebook