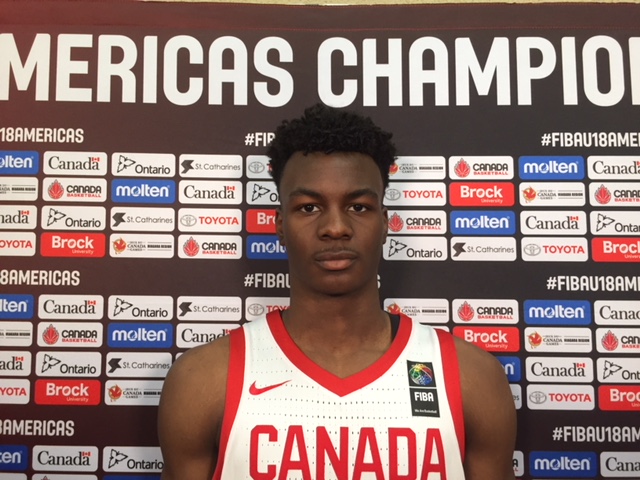 By ADAM ZAGORIA ST. CATHARINES, ONTARIO — Emanuel Miller, an athletic 6-foot-7 wing from Scarborough, Ontario and the La Lumiere School (IN), says two schools are recruiting him the hardest, although his recruitment could blow up after his play here at the FIBA Americas U18 Championship. “I have a lot of interest but right now Oklahoma and Ohio State, those two are the ones that are continuously on me,” Miller told me after going for 19 points, 8 rebounds and 4 assists as Canada mauled Ecuador, 115-75, in their second game here Monday afternoon. Coaches from both schools were on hand. As for Oklahoma, he said, “They talk about how it’s a great program and how I could make an impact the first year coming in because of my versatility.” On Ohio State, he said, “The exact same thing. Such a family culture at Ohio State. And they know how much I love family and how the same thing, I could have an immediate impact.” “I have many other schools recruiting me right now but those are two schools messaging me from morning till night,” he said.

A slew of coaches were in the stands for the game, including Michigan’s John Beilein, Purdue’s Matt Painter, and assistants from Syracuse, Iowa, Marquette, Cal, South Carolina and Louisville, among others. The US coaches Bill Self of Kansas, Danny Manning Wake Forest and Anthony Grant of Dayton were also on hand. Several coaches were intrigued by Miller’s motor and athleticism as he ran rim-to-rim for putbacks, layups and rebounds. So far, Miller has only visited Notre Dame and Indiana. “Indiana, I like how they still embrace the culture from back in the day,” he said, “I love that. At Notre Dame, same thing, I love the culture.” Still, he says he’s “definitely open to other schools.” “I want to go into my senior year without dealing with all the distractions of recruiting and all that so I can have a free mind, so I think i’ll be making my decision pretty early,” he said, adding that the fall was a possibility.
Follow Adam Zagoria on Twitter
And Like ZAGS on Facebook