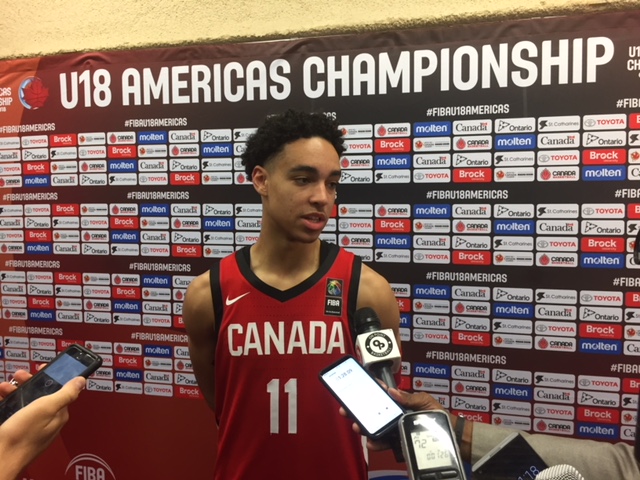 By ADAM ZAGORIA ST. CATHARINES, ONTARIO — Andrew Nembhard doesn’t have his running buddy R.J. Barrett here at the FIBA Americas U18 Championship to help him win a gold medal. So Nembhard is the de facto leader of this Canadian team, and he has one goal in mind. “I’m looking to get a gold medal out of this week,” the 6-foot-3 Nembhard said after going for a game-high 28 points with 6 assists as Canada opened the event with a convincing 92-75 victory over Argentina at the Meridian Centre. Nembhard is especially excited to be playing in this event in his home country. “It’s just amazing, to be honest,” he said. “It’s my first time playing for Canada at home. Great fans came out today, it’s just an honor. It’s really fun.”

Florida-bound Pg @AndrewNembhard on playing for a gold medal in Canada pic.twitter.com/1FTYsOYKyu

The Duke-bound Barrett — Nembhard’s teammate at Montverde (FL) Academy and on the UPlay Canada AAU team — led the Canadian U19 team to to a gold medal at the FIBA U19 World Championship in Cairo, Egypt last summer. The projected No. 1 pick in the 2019 NBA Draft, he is now training in Los Angeles with fellow future NBA prospects. Barrett heads to Duke at the end of the month to join a blockbuster recruiting class that includes Joey Baker, Tre Jones, Cam Reddish and Zion Williamson. Without Barrett, Nembhard and the other Canadians must step up if Canada is to challenge a loaded U.S. team here for gold. “Yeah, he would’ve been one of the main scorers on the team so without him other people have to step up,” the Florida-bound Nembhard said of Barrett, his close friend and Fortnite rival. Nembhard is the alpha male here. He made 11-of-24 shots, going 9-of-18 from two and 2-of-6 from three while playing a team-high 34 minutes. “Yeah, I feel I can contribute a little more and show people that I can contribute a little more,” he said. Still, others stepped up without Barrett, too. A.J. Lawson, who is nearing a college decision of his own, had 18 points and 6 rebounds and Emanuel Miller added 18 points and 6 rebounds. “I think we have a lot of guys on the team that are aggressive, that can score and I think  our coaches are motivating us to be aggressive so I think it’s great thing for us in the future,” Nembhard said. Nembhard was unavailable to play for the U19 team last year because he suffered a stress fracture in his foot and then got ill at Montverde, making him unable to travel to Egypt.

“I was bummed I couldn’t be playing on the court with my guys, but, honestly, I was positive,” Nembhard told Slam Magazine. “Me and my dad and were the most positive the whole time, always thought I was going to come back.”

“I missed it, but I also just said, ‘I want to take my time so I don’t come back too early and mess up anything for myself,’” he added. “It’s kind of just one little obstacle in my life that I kind of surpassed, so I’m great to be moving on now.”

Nembhard and Barrett went on to lead Montverde to an undefeated 35-0 record and the Geico High School National Championship in New York in early April.

“He made tremendous recovery from that. I didn’t know if he was going to be able to play this year. And not only is he playing, he’s playing incredibly,” Montverde coach Kevin Boyle told Slam. “I’m telling you, there’s very few people his age as mature and as thoughtful of other people than him, yet he really competes on the court. He’s got no ego. He’s a selfless person.”

Barrett added: “We were all scared for him at the beginning. But seeing him come back the way he has, he’s always been a soldier, so I’m not surprised he came back from it.”

Now, Nembhard is trying to do what Barrett did last summer.

And he’ll need a gold medal to share bragging rights with his close friend.